New legislation tabled by the right-wing Polish government would ban sex education and criminalize "the promotion of underage sexual activity." Teachers who flout the ban could face up to five years in prison. 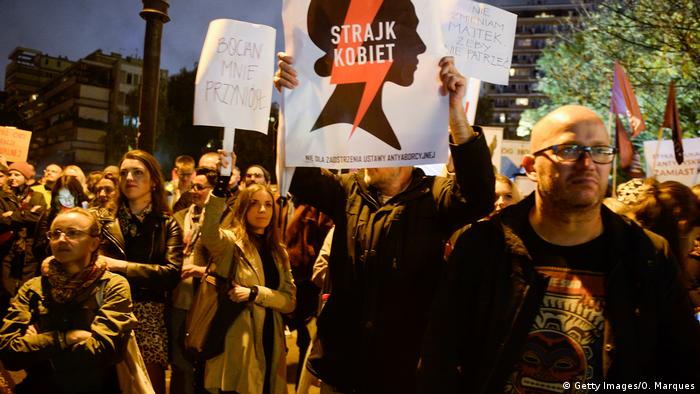 Protesters have gathered in Warsaw to oppose new legislation proposed by the Polish government which would ban sex education in schools and treat it as "pedophilia."

According to Polish weekly newsmagazine Wprost, the new bill — known as the "Stop Pedophilia" law — aims to send sex educators to prison for up to five years.

The legislation would "criminalize the promotion of underage sexual activity" and would also see anti-abortion and anti-contraception ideology taught in Polish schools.

Anna Blus, a researcher with Amnesty International, described the legislation as "outrageous" and "extremely vague and broad."

"This bill will put young people at risk," Blus told DW on Wednesday. "It could have disastrous effects."

The new law has the backing of the ruling conservative Law and Justice party (PiS), who on Sunday won an increased, but narrow, majority in the parliamentary election.

The party's popularity has in part been attributed to their socially conservative stance on homosexuality and sex education, and the sex education policy was among the first on their agenda.

Newly elected PiS lawmaker Marcin Ociepa claimed fears that educators may end up behind bars are just an "overinterpretation of the bill," and said he said he saw nothing bad about the legislation.

"This only says that it is not allowed to encourage a person younger than 15 ... to have sex or to conduct other sexual activities," Ociepa told private radio TOK FM.

Let's talk about sex — perhaps not in Poland

Protesters have argued that appropriate sex education is a necessary part of the school curriculum, and would meet the World Health Organization standards for Europe. The campaign "Stop Sexualization of Youth" has previously claimed that sex education "promotes sexual activity among the youth," according to the Wprost report.

Read more: The mass murder of Polish intellectuals — and the German Nazis who got away with it

IPPF European Network, an organization that promotes sexual and reproductive rights, tweeted Wednesday that the bill was "morally bankrupt."

The bill will see its second reading in the Polish lower house on Wednesday evening and is expected to be discussed by the senate on Friday, when bigger protests are planned. Given the PiS majority in parliament, the bill is expected to be passed into law.

Most sex education classes in Polish schools teach students how to "prepare for family life," though schools in cities run by more liberal parties have allowed sex education programs.

As Poland shifts sharply to the right on sex education and women's reproductive rights, a feminist organization is fighting back with a campaign to get women talking. It's a start, one of SexEdPl's leaders tells DW. (18.11.2017)