As PiS turns topic taboo, feminists get Poland talking sex | News and current affairs from Germany and around the world | DW | 18.11.2017

As Poland shifts sharply to the right on sex education and women's reproductive rights, a feminist organization is fighting back with a campaign to get women talking. It's a start, one of SexEdPl's leaders tells DW. 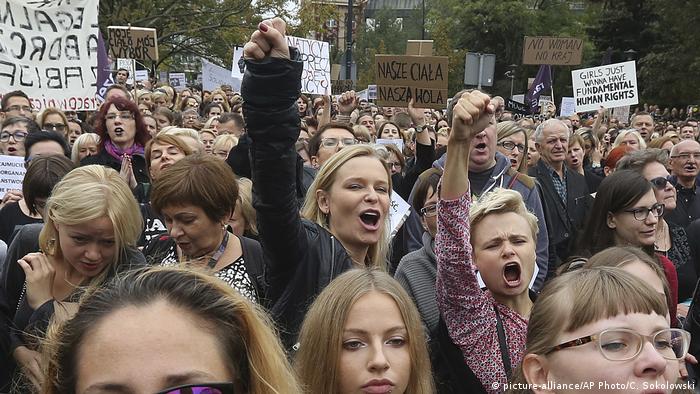 Tens of thousands of Poles have staged a further protest in Warsaw against government policies that have also alarmed the EU. Their march began outside the constitutional court which is facing curbs to its powers. (25.09.2016)

The sexual harassment scandal surrounding the Hollywood producer Harvey Weinstein (and other men in show business) continues to deepen. News, background and comment on the subject can be found here. (30.10.2017)

Poland's health ministry has created a video to promote procreation, encouraging the country's citizens to "take rabbits as an example." Poland has one of the lowest fertility rates in Europe. (08.11.2017)

The nationalist-conservative Law and Justice government has earned mixed results in its two-year rule, says DW's Bartosz Dudek. But despite right-wing rhetoric, Europe and Germany must not forget Poland's contributions. (15.11.2017)

A Dutch sailing boat offering legal abortions has taken up a position off the west coast of Mexico. It is offering free, legal medical terminations for the victims of sexual violence. (23.04.2017)

Poland is split over the fate of Polanski

The detention of Polish-born film director Roman Polanski in Switzerland on a decades-old sex charge is causing ructions in Poland's establishment. Now the Polish PM has stepped into the ring. (30.09.2009)

A prominent Warsaw-based priest is calling on the Catholic Church to remain political. But opinions among Polish Catholics are split - even within families, as Monika Sieradzka discovered when she visited Warsaw. (02.06.2016)

Poland's Supreme Court has upheld a decision not to extradite famous filmmaker Roman Polanski to the US on charges of rape. The 83-year-old fled the US almost four decades ago, living in Europe ever since. (06.12.2016)

Thousands of women have protested in the Polish capital against a proposed ban on abortion. The Catholic Church, which wields substantial power in Poland, has approved the initiative. (03.10.2016)

Polish government to back down on full abortion ban?

The Polish government looks set to dilute proposals to tighten one of Europe's most restrictive abortion laws. Following mass protests, the government is for the first time since taking office talking of humility. (05.10.2016)

As the ruling Law and Justice (PiS) government plans to take Poland out of the Istanbul Convention on violence against women and education reforms shunt sex education off the curriculum, Baran believes that the time is ripe for a conversation about matters sexual in the deeply Catholic country.

In addition to stifling public discussion of reproduction, PiS has sought to make abortion, contraception and family planning more difficult to obtain, said Baran, a psychologist who specializes in sexuality.

"The SexEdPl campaign is about making it OK for women to talk about sex issues openly," she added.

"We started a Facebook page, Girls4Girls (Dziewuchy Dziewuchom), just after the government introduced its abortion legislation in April 2016," Baran said.

Perhaps in part because of this rising awareness of sexual politics and the directness with which PiS has pursued its moral agenda, many women are up in arms.

Large numbers demonstrated in Warsaw and other big cities in 2016 after PiS attempted to tighten an already restrictive law on abortion.

The group sees its role as helping to educate Polish women about their reproductive rights on abortion, contraception and maternity care.

It has informal links with the Dutch feminist group Women on the Waves, which has been working on helping women in Poland, get access to contraception and abortion advice over the past decade.

Baran said lawyers from the Ordo Iuris, a hard-line conservative advocacy group, recently sent guidelines to prosecutors on identifying proxies for "abortion tourism," and this would cover Women on the Waves.

"Within 24 hours we had 30,000 clicks," Baran said of the surge in support after PiS outlined its abortion plans last year.

Now with about 500,000 members, it is the biggest feminist movement in Polish history, with branches in Berlin, London, Dublin and Paris, Baran said.

Legislation passed in September removed sex education from the national curriculum and replaced it with beefed up "Preparation for Family Life" programs, which existed before, Baran said, but are now much more conservative.

Instead of learning about contraception, youths will be introduced to papal-inspired NaProTechnology and other strategies for family planning endorsed by the Catholic Church.

"In the core curriculum, the word 'family' cropped up 173 times and the word 'sex' just twice: once a reference to cybersex and the other to sex addiction," Baran said.

"Professor Urszula Dudziak, who heads the parliamentary committee overseeing the legislation, has said sex education is not needed at all," she added.

"We see this odd attitude as dangerous and as equally strange as the recent ad campaign featuring rabbits to encourage Poles to reproduce," Baran said. 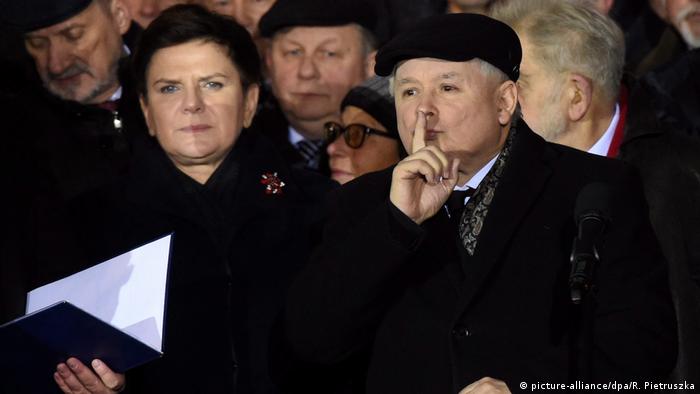 "When we started, 18 percent of people polled said they supported a liberalization of the abortion law, and now it's 46 percent," she said.

Girls4Girls, like the Committee for the Defense of Democracy (KOD), is not affiliated with any political party.

KOD was set up in early 2016 to defend against the perceived undermining of Polish democracy by PiS.

"We also found that women in rural areas are much more receptive to our ideas and wanted to take part," Baran said.

She said feminism's critics in Poland consider the ideology an educated, urban trifle with little or no relevance to "ordinary" women, the majority of whom live in small towns and villages and attend church regularly.

"Interestingly, older women also tend to be more progressive, which is maybe a legacy of the communist era, when abortions were legal," Baran said.

Since coming to power in late 2015, PiS has adopted a socially conservative line on issues from sex education to abortion, seemingly bent on turning the clock back to a time — imaginary or real — when the Catholic Church dominated public morality. Some see PiS as paying the church back for its assistance in galvanizing support during the 2015 elections via organs such as Radio Maryja.

The church-funded StopAbortion campaign is very strong, Baran said. "And it doesn't hold back on the rhetoric," she added. "We are murderers for them."

One particularly egregious example of the vitriolic language used by the some members of the church came from Father Dariusz Oko, a lecturer at Krakow's John Paul II Papal University, who said in 2014: "Just as the church criticized Marxist and Nazi ideology — and was persecuted for it — so now it is criticizing gender ideology."

Urszula Chowaniec, a sociologist at London University, told DW that the church considers interrogations of gender "deeply destructive" to "the person, inter-human relations and all social life."

The Warsaw-based film critic Ola Sekula told DW that, ahead of a protest against abortion plans last year, one bishop proposed throwing hydrochloric acid at the marchers.

In fact several activists from the far-right Mlodziez Wszechpolska (All-National Youth) only threw stone-hard pieces of ice, she said. "I no longer take my daughter on these marches," she added.

Hundreds of thousands of women and men took to the streets on Black Monday in November 2016 to protest the curbing of an already draconian abortion law.

The Federation for Women and Family Planning estimates that about 150,000 illegal abortions are performed each year. Legal abortions in Poland, which has a population of 38 million, are limited to around 700 to 1,800 per year.

Some women travel to Germany or to other nearby countries where restrictions are laxer.

Doctors are scared to carry out abortions even in the three cases the law allows — rape, when the pregnancy endangers the mother's life and a damaged fetus — Baran said.

"Very few want to take the risk. In fact they now try to make access to the morning after pill even more difficult by making a prescription needed to get it, which kind of defeats the object," Baran said.

She added that all doctors can claim a "conscience clause" in this area — and most do. 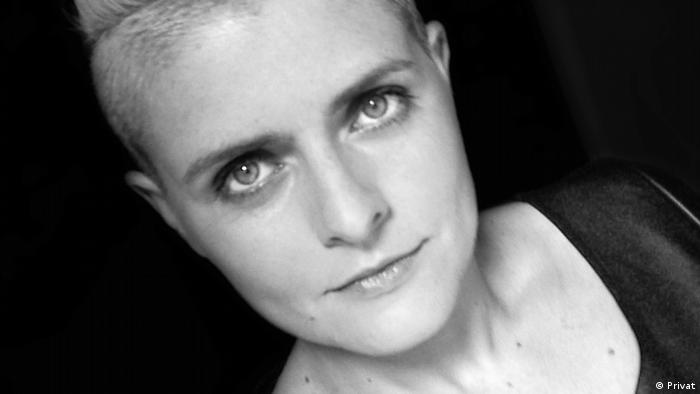 According to the STER Foundation’s report on sexual violence, 87 percent of Polish women have experienced some kind of sexual harassment, while 9 out of 10 rapes are never reported to the police.

When such behavior is commonplace, it creates fertile ground for sexism and misogyny that are the foundation of Poland’s deeply rooted rape culture, Baran said.

"As far as sexual harassment goes, Poland is very, very far from anything like the 'Weinstein effect' in the US and UK," she added. "But it is equally needed when 20 percent of Polish women have been raped and 70 percent of rape cases never even make it to court."

"This is a revolution," he told the weekly magazine Polityka.

"Sexual taboos are disappearing, and women in Poland have at last discovered sex for themselves," Lew-Starowicz said. "Not for their partner, not for the sake of a relationship, not in the interest of the family. Not for obligation, but for pleasure!"

Lew-Starowicz noted that, in a survey published in the same issue of Polityka, more than three-quarters of women said they needed to have sex at least once a week. In 1992 only 35.3 percent said as much.

The actress Magdalena Boczarska, who played the lead in the The Art of Love, a film about a 1970s Polish sexologist that premiered in February, also said some progress had been made. 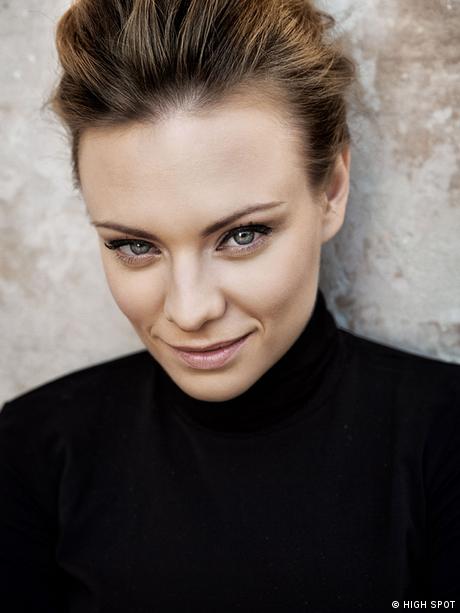 "Thankfully, women have learnt how to draw pleasure from sex, have understood the importance of sexual satisfaction, not just giving pleasure," she told DW. "I would even risk saying that women appear to be much more sexually liberated than men."

And the Playboy Polska journalist Aleksandra Rozdzynska told DW: "Even very religious people of my generation do not wait for sex until marriage. They have many partners before marriage. I also think they do not take to heart the warnings of priests and their advice for married life."

Baran is more cautious, noting that most celebrities did not want to support the SexEdPl campaign.

But it appears that a movement is in motion.

"I am just very angry watching PiS's changes," a middle-aged mother of two from Silesia told DW. "I attend a lot of these protests with my kids against the violation of women rights and the day after each of them my 5-year-old daughter asks: 'Did we win?' I keep telling her not yet; it is a long way but we will win."