The sexual harassment scandal surrounding the Hollywood producer Harvey Weinstein (and other men in show business) continues to deepen. News, background and comment on the subject can be found here. 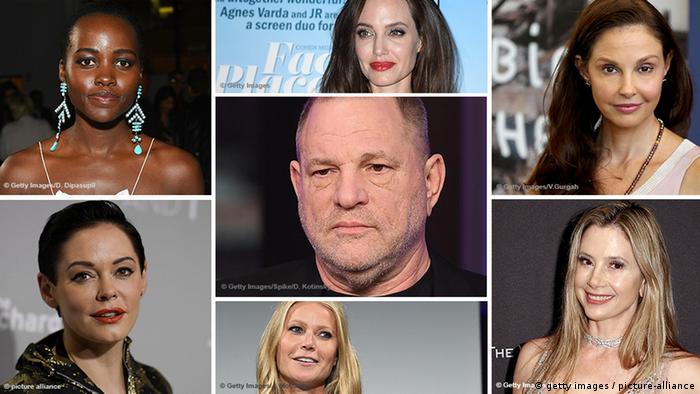 It all began with an article in The New York Times in early October, wherein several women alleged that they had been sexually harassed by movie producer Harvey Weinstein. Since then, a large number of other women have spoken out about the film mogul's sexual abuse — including Hollywood stars like Gwyneth Paltrow and Angelina Jolie.

Weinstein himself has rejected all the accusations. What is meanwhile being called the "Harvey Weinstein effect" has sparked a global debate about sexual harassment by men, with further cases emerging almost daily.

Hollywood #MeToo march joined by hundreds in protest against abuse

Hundreds of people have marched against sexual harassment and assault in Hollywood, following weeks of mounting allegations against several notable producers, directors and entertainers. (13.11.2017)

After the cancellation of the TV show "House of Cards," Kevin Spacey will be replaced in Scott's completed movie, "All the Money in the World," due in December. It is an "unprecedented move," comments the industry. (09.11.2017)

Further stars have been accused of sexual harassment as more women and men come forward. The latest accusations affect a major director and a legendary actor. (02.11.2017)

Netflix has pulled its hit show "House of Cards" after Kevin Spacey was accused of making sexual advances on a teenage boy. Filming of the sixth season has been suspended. (31.10.2017)

US actors Rachel McAdams and Selma Blair have revealed shocking information about James Toback in a recent interview. Harvey Weinstein, also accused of sexual abuse, has taken legal actions against his studio. (27.10.2017)

The Harvey Weinstein effect is sending shockwaves through show business. Hollywood director James Toback and fashion photographer Terry Richardson are the latest high-profile men to be accused of sexual misconduct. (25.10.2017)

The Harvey Weinstein sexual abuse allegations reveal systemic abuse of male power, according to Rolf Pohl, a social psychologist at the University of Hanover. He tells DW how this abuse has remained socially acceptable. (24.10.2017)

The Los Angeles Police Department has opened an investigation into Harvey Weinstein after a sixth woman accused the mogul of sexual assault. This case falls within the 10-year statute of limitations. (20.10.2017)

The allegation that the Hollywood mogul sexually assaulted numerous women should come as no surprise, says feminist Anne Wizorek. And yet, the fact that it does testifies to the silent prevalence of everyday sexism. (15.10.2017)

Following an emergency meeting, the Oscars board has voted to expel Hollywood producer Harvey Weinstein. The movie mogul is facing mounting allegations of sexual harassment, assault and rape. (14.10.2017)

Police in the UK have opened their own investigations into allegations US movie producer Harvey Weinstein committed sexual offenses. New York police are reviewing 'additional complaints' as more details emerge. (12.10.2017)

Hollywood producer Harvey Weinstein has apologized after a newspaper report accused him of sexual harassment over decades. Weinstein — who co-founded Miramax — has hired therapists and plans to take a leave of absence. (06.10.2017)

Convicted of sexual assault and rape, the ex-movie mogul cites a biased judge and jury, and lurid media coverage, as grounds for retrial.