Comedian Louis C.K. and actor Steven Seagal have joined Harvey Weinstein and Kevin Spacey among the Hollywood figures accused of sexual misconduct. The comedian later admitted that the stories were true. 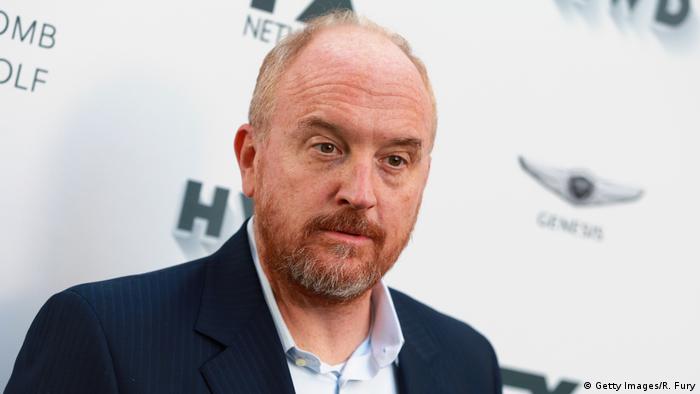 Comedian Louis C.K. has been accused of sexual misconduct by at least five women in incidents dating from the late 1990s to 2005, according to a report published Thursday by The New York Times.

'The stories are true'

The New York premiere of Louis C.K.'s latest movie, "I Love You Daddy," was abruptly canceled on Thursday night as news of the allegations broke. The film's distributor, The Orchard, said later on Thursday it would not release the film.

Shortly after the announcement from The Orchard, the comedian addressed the allegations publicly. "The stories are true," he said, "there is nothing about this that I forgive myself for."

FX Networks and FX Productions, where the Louis C.K: removed as executive producer of four shows, have canceled their associations with the comedian. Netflix also said it would not produce a second planned special starring Louis C.K.

Action star and martial arts expert Steven Seagal has been accused by three actresses of sexual misconduct and making lewd comments in incidents dating back to the early 1990s.

Portia de Rossi, star in the comedy "Arrested Development," described her encounter with the actor during an undated audition in a Twitter post, saying: "He told me how important it was to have chemistry off-screen as he sat me down and unzipped his leather pants. I ran out and called my agent. Unfazed, she replied, 'well, I didn't know if he was your type.'"

Actress Jenny McCarthy, who had already accused Seagal in 1998, retold her experience with the actor during an audition for the 1995 film "Under Siege 2." After Seagal suddenly had asked her to lower her dress, McCarthy responded that she had been told there was no nudity in the film, to which the actor responded that "there is off-camera nudity."

Julianna Margulies last week recounted an encounter between her and Seagal, with whom she starred in the 1991 film "Out for Justice." Margulies, who went on to star in the hit television series "ER" and "The Good Wife," told broadcaster Sirius XM how a female casting director had told her Seagal wanted to go over lines with her in his New York hotel room one night. When she arrived, she found Seagal sitting on his own.

"He made sure that I saw his gun, which I had never seen a gun in real life," she said, adding that she escaped the incident unscathed.

Although Seagal has seen his celebrity stock decline significantly from its heights in the 1980s and early 90s, he remains a popular figure in eastern Europe. Last year, the actor was accorded Russian citizenship, personally picking up his Russian passport at the Kremlin from President Vladimir Putin.

Louis C.K. and Steven Seagal join a list of prominent Hollywood figures that have been accused of sexual misconduct in recent weeks, including producer Harvey Weinstein, director James Toback and actors Kevin Spacey and Dustin Hoffman.

The ever-increasing array of allegations spurred Los Angeles prosecutors to launch a task force to evaluate sexual abuse allegations in the entertainment industry.

In a statement on Thursday, District Attorney Jackie Lacey said the task force would be made up of specially trained prosecutors tasked with evaluating cases once they are referred to the district attorney's office for prosecution.

Further stars have been accused of sexual harassment as more women and men come forward. The latest accusations affect a major director and a legendary actor. (02.11.2017)