What do Europeans consider sexual harassment? | Europe | News and current affairs from around the continent | DW | 12.11.2017

Does a sex joke constitute sexual assault? Or only if they grab your bottom? A survey shows that tolerance levels vary across Europe. EU countries deal differently with sexual harassment, and Germany often lags behind. 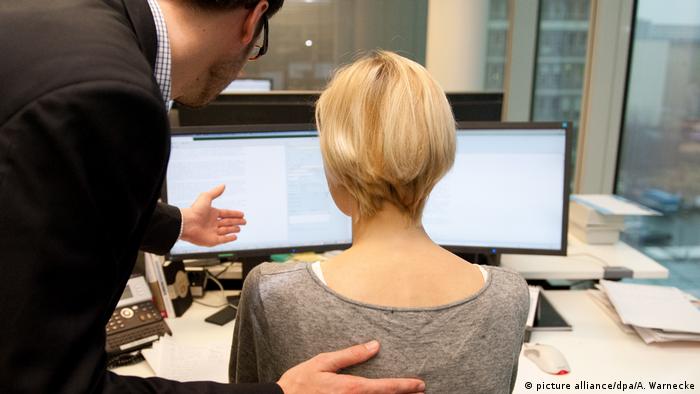 Read more: You too? Sexual harassment in the German workplace

The Weinstein affair has brought to light countless other sordid incidents, opening people's eyes to how many men routinely behave in an unacceptable way towards women. The hashtag #MeToo is indicative of the number of women all over the world who have experienced sexual harassment. However, critics point out that it is not always clear what exactly those affected are referring to.

That's because the understanding of what constitutes sexual harassment differs widely, among both men and women. What some consider flattering may be seen by others as overstepping the mark. This was highlighted in a recent survey conducted in seven different European countries. The polling institute YouGov surveyed women and men in Germany, Britain, France, Denmark, Sweden, Finland and Norway. The 8,500 respondents were asked to evaluate different situations: for example, a man whistling at a woman, making bodily contact with her while dancing at a party, or exposing his genitals to her.

Almost everyone is of the opinion that it constitutes sexual harassment if a man tries to take a photo up a woman’s skirt or demands sexual favors. Grabbing a woman’s behind is also a no-no in all the western European countries that took part in the survey. 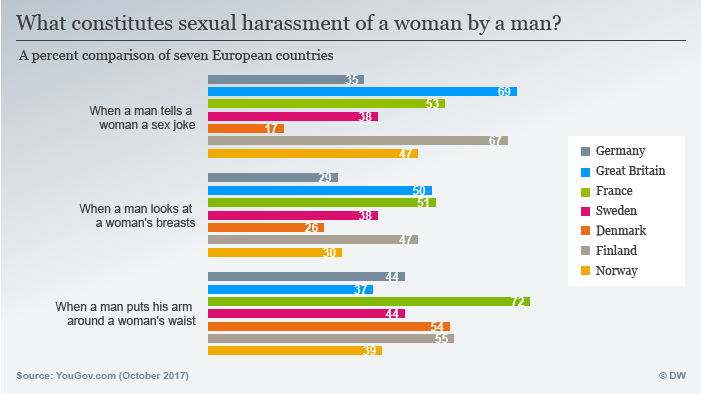 Germans seem to have a fairly high tolerance level — only one in three considers that jokes about sex constitute sexual harassment. In Britain, on the other hand, 67 percent are bothered by smutty remarks. Most British women also think it’s too much if a man stares at their cleavage.

The French, reputedly the biggest flirts in Europe, turned out to be particularly strict with regard to winking. One in four felt this already constituted sexual harassment. For 16 percent of people in France, asking for a date was also taboo, a stricter response than was found among respondents in any of the other six countries.

EU-wide: Every second woman has been harassed

But what’s the situation in the other EU countries?

"One of the main findings is the pervasiveness of the problem of sexual harassment," says Joanna Goodey, who led a large-scale, Europe-wide study by the European Union Agency for Fundamental Rights (FRA) in 2014. It found that half of all women in Europe had at some point in their lives been the victims of sexual harassment. Furthermore, Goodey told DW: "One in five were saying, across the EU, that they had experienced at least one form of sexual harassment in the last 12 months."

Her investigation questioned, in detail, a total of 42,000 women in all 28 EU member states about their experiences of unwanted advances and assaults by men. Enquires about sexual harassment were evaluated on the basis of the 11 most common experiences: from unwanted touching, hugging or kissing to sexually explicit emails or texts.

Are women in Sweden harassed more frequently than women in Bulgaria?

Scandinavia, of all places — regarded as a group of model countries in terms of gender equality — produced some strikingly negative results. In Sweden 81 percent of women stated that they had been sexually harassed in one form or another from the age of 15 onwards. These rates are similarly high in Denmark, the Netherlands and Finland. Three out of four French women have also experienced sexual harassment. At the other end of the scale is Bulgaria, where just 24 percent of women indicated that they had been harassed at some point in their lives. The levels are similarly low in Romania and Poland.

At first glance, this big discrepancy is surprising. Why does sexual harassment seem to be less of a problem in southern and eastern Europe than in gender-equality-conscious Scandinavia, for example?

"We found that in certain member states it's less likely that women will talk about incidences of sexual violence or harassment with other people," says Goodey. She explains that history has had a hand in the fact that in Sweden, for example, it is normal nowadays to report sexual assaults. Unlike in eastern Europe, gender equality has been a subject of discussion there for many years, she points out.

How sexual harassment is punished in Europe

The Istanbul Convention of 2011, a Council of Europe convention against violence against women, refers explicitly to sexual harassment. According to Article 40 of the Convention, stating that "any form of unwanted verbal, non-verbal or physical conduct of a sexual nature with the purpose or effect of violating the dignity of a person (…) is subject to criminal or other legal sanction."

Many experts see this as a groundbreaking set of rules — but in a great many countries they are still not being applied.

In Germany, critics complain that for a very long time sexual harassment was downplayed and dismissed as "groping." It took the coordinated sexual assault of dozens of women in Cologne on New Year’s Eve 2015 to get the debate moving. Only since the 2016 reform of the German law governing sexual offenses has sexual harassment has been categorized as a crime. Anyone who physically touches and thereby harasses another person in a sexual manner must now reckon with a prison sentence of up to two years or a fine. 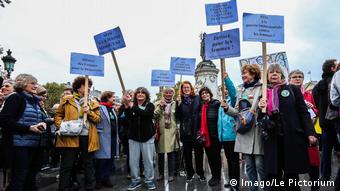 In France, sexual harassment is punishable by up to two years in prison and a fine of €30,000 ($35,000). If the perpetrator is the victim’s superior at work and thereby abusing his power, he faces up to three years imprisonment. Charges can be brought against, among others, those who exert severe pressure on another person to take part in "an act of a sexual nature." In the future, France intends to regulate even more strictly what constitutes an attempt at flirtation and what crosses the line into harassment. The French secretary of state for equality, Marlene Schiappa, wants to pass a law whereby the police will be able to impose a fine when women are subjected to sexual harassment.

Like Denmark, Italy, Serbia and others, France ratified the Istanbul Convention back in 2011. In Germany, this only happened in the summer of 2017.

However, according to EU rights expert Goodey, laws alone are insufficient. "You need to also create an environment where people feel they can report incidences of sexual harassment," she says. Ultimately, she says, this is a topic that affects the whole of society, and it’s vital that men, too, speak out against sexual harassment.