Germany took over the rotating EU presidency on Jan. 1. DW-WORLD.DE has prepared a dossier with background information on pressing issues that are likely to come up while Berlin leads the 25-nation bloc. 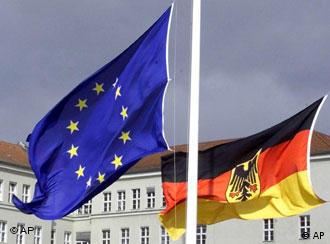 On Jan. 1, Germany took the presidency of the Council of Ministers of the European Union, the bloc's main decision-making body. For six months, German Chancellor Angela Merkel will be charged with conducting the EU's business and finding answers to tough questions, such as further expansion and the union's ongoing constitutional crisis.

Other issues the German presidency plans to focus on include securing Europe's future energy supplies, cutting down on bureaucracy, and climate control.

Get more background information on the challenges for Germany's EU presidency in this DW-WORLD.DE dossier.

Discover Europe: Get detailed information about 49 European countries from DW-WORLD.DE's interactive map. Click on the icon to the left to start exploring.

If you think that CAP is something to wear, OLAF is a man's name, and are completely lost when it comes to PSC, DW-WORLD.DE's EU dictionary may be able to help you out.

Up to now many European countries have fiercely opposed EU interference in their labor markets. Now a new pan-European Green Card scheme is reportedly in the pipeline. (09.01.2007)

German Foreign Minister Frank-Walter Steinmeier warned Sunday that stability in the Balkans depended on how the future status of Kosovo is resolved and said the EU will work to ensure peace in the Serbian province. (07.01.2007)

New Agreement Lets Some EU Fish Off the Hook

The European Union will tighten fishing quotas for some endangered species. But environmental groups say the 2007 quotas will mean disaster for threatened fish such as cod and anchovies. (21.12.2006)

Less than two weeks before Germany assumes the EU presidency, the country wants the ailing EU treaty back on track as some warn that indecision is a "warning sign that Europe is paralyzed." (19.12.2006)

Oil supplies from Russia to Europe were disrupted this week, and the EU unfurled a revamped energy policy. DW readers wrote in with their thoughts and suggestions on Europe's energy woes. (10.01.2007)

Major Euro-Zone Expansion on Hold Until Next Decade

Five years after 12 EU members switched to the single European currency, hopes for a rapid expansion of the euro zone have been dashed by delays in eastern Europe and a lack of interest from west European holdouts. (10.12.2006)

The leaders of France, Germany and Poland on Tuesday called for "an equal partnership" between Russia and the EU, and for the resolution of a trade row between Moscow and Warsaw. (05.12.2006)

EU Must Stay Open, Finland Says As It Takes Over Reins

On Saturday, Austria hands over the presidency of the European Union to Finland. The Alpine republic declared some lofty goals during its time at the top, but to what extent did it deliver? (01.07.2006)

As Britain's six-month rotation as European Union president draws to a close, observers look back on the past half year, which was marked by a series of attempts to reform the EU. In the end, little was achieved. (27.12.2005)

European commentators on Tuesday had mixed reactions about Bulgaria and Romania's entry into the European Union. (02.01.2007)

In front of a trip to Washington, German Chancellor Angela Merkel said in an interview published on Wednesday she wants to see "ever-closer economic cooperation" between the European Union and the United States. (03.01.2007)

As Germany gears up to take over the EU presidency in January, Finland can start to relax as it steps down. What did it achieve in six-months' time? For one thing, Lebanon replaced Russia on the agenda. (27.12.2006)

The Council of the European Union