If you think that CAP is something to wear, OLAF is a man's name, and are completely lost when it comes to PSC, DW-WORLD.DE's EU dictionary may be able to help you out. 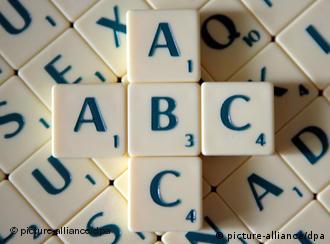 ACQUIS COMMUNAUTAIRE -- Current EU law. It's a French expression, which refers to the sum of common rights and duties of EU member states. All new members have to adopt the "acquis."

ACCESSION CANDIDATE -- A country currently engaged in EU membership discussions (Croatia and Turkey) or planning to do so (Macedonia). Accession countries have already concluded negotiations and are waiting to become members (Bulgaria and Romania).

CAP -- The Common Agricultural Policy has been in existence since 1960. Thirty-seven percent of the EU budget goes to agriculture and 6 percent is used to preserve rural areas.

CHARTER OF BASIC RIGHTS -- Lays down the basic rights for EU citizens. It was adopted in December 2000, but has not yet taken effect. The charter is part of the stalled proposed constitution.

COUNCIL OF MINISTERS -- The EU's law-making body. The council is led by the country holding the EU presidency. Meetings of the council are composed of ministers from each of the member states.

DDD -- Democracy, Dialogue, Debate: An effort by the EU Commission to inform citizens in the wake of the failed referendums on the constitution in France and the Netherlands.

DIRECTIVE -- One of the two most important legal instruments. A directive is a legal framework that has been adopted by the Council of Ministers and will be turned into national law. A decree, on the other hand, creates the same law in every member state.

EURO ZONE -- The 12 countries which have already adopted the euro as their national currency: Austria, Belgium, Finland, France, Germany, Greece, Ireland, Italy, Luxembourg, the Netherlands, Portugal and Spain. Slovenia will join in January 2007.

FEDERALISM DEBATE -- Should the EU become a kind of federation that leaves nation states only with limited authority over internal issues only?

2. Supporting economic and social changes in areas with structural problems

HARMONIZATION -- The adjustment of national law to eliminate hurdles for the free movement of people and goods.

INTERGOVERNMENTAL -- Agreements between the various governments, such as the admission of new members or the new constitution. They always have to be unanimous.

LISBON STRATEGY -- The goal -- decided upon in Lisbon in 2000 -- to turn the EU into the world's most dynamic economic region within a decade. It has already failed, but remains on the agenda of every EU summit. It now stands for growth efforts, especially in the areas of research and education.

MAASTRICHT CRITERIA -- The benchmark countries must meet to introduce the euro. It looks at stability of prices and exchange rates, debt level, budget deficit and interest rates.

NET CONTRIBUTORS -- Member states that contribute more to the EU budget than they receive. Germany is the biggest net contributor with payments of 6.06 billion euros ($7.8 billion) in 2005 and 7.14 billion euros in 2004.

OLAF -- Stands for Office Europeen de Lutte Anti-Fraude, or European Anti-Fraud Office. It was established in 1999 to combat fraud and corruption within the EU.

PSC -- The EU's Political and Security Committee. It consists of representatives of the foreign ministries of member states. It deals with questions of security policy, including military ones. It prepared the EU military mission in DR Congo, for example.

QUALIFIED MAJORITY -- Votes by member states in the Council of Ministers are weighted according to the size of countries. To reach a qualified majority, the most common sort of vote taken by the Council, 232 of 321 votes are needed.

REVIEW CLAUSE -- Calls for the review of a law government could not agree on otherwise. For example, the current financial planning until 2013 will be reviewed in 2009.

SCREENING -- Checking the laws of an accession candidate in terms of their compatibility with EU law (acquis). The basis of all accession talks.

TROIKA -- The EU's foreign policy board. It includes the foreign minister of the country that holds the rotating EU presidency, the high representative for the common foreign and security policy (Javier Solana) and the EU commissioner for external relations and European neighborhood policy (Benita Ferrero-Waldner).

Glossary: The European Union from A-Z

A Readers Guide to the Draft European Constitution

With the creation of a president, foreign minister and new powers to be centralized in Brussels, the EU Constitution proposes the greatest reform in the history of the European Union. Here's a DW-WORLD dummy's guide. (30.09.2003)

Germany's Angela Merkel said reminding Europeans of their common values is the key to creating a feeling of unity in the 25 nation bloc. (15.11.2006)