Germany's security policy during its EU presidency aims to give Europol additional powers in order to better fight international terrorism and cross-border crime. It also calls for improved police cooperation. 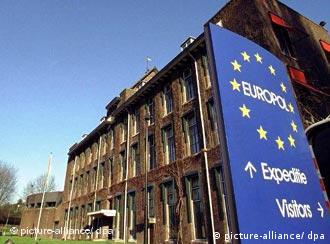 "All member states must be aware that they would be overtaxed to cope with global security challenges all on their own," Schäuble said Wednesday at the presentation of Germany's security program for its EU presidency.

"In the future, Europol should be responsible for fighting all forms of serious cross-border crime, such as a serial killers active in more than one member state or major disruptions to internal security caused by hooligans," Schäuble told reporters.

Schäuble said he supported the European Commission's proposal last month to strengthen Europol's role. The so-called Europol Convention needed to be transferred into the EU's legal framework, he said. Europol was established in 1992 and took up its full activities in 1999. Over the past years, critics have said it lacks the powers necessary to handle new threats in the growing EU.

Another priority for Germany is improving police cooperation between member states, Schäuble said.

"Criminals must not have a chance to escape prosecution simply by crossing a border," he said. Germany will work to have the provisions of the Treaty of Prüm turned into EU law. 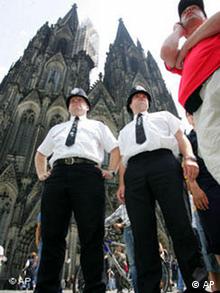 German police had help from Britain during the World Cup

This agreement aims to establish an infrastructure to step up cross-border cooperation, particularly to combat terrorism, cross-border crime and illegal immigration. It was adopted by Austria, Belgium, France, Germany, Luxembourg, Spain and The Netherlands in 2005.

The treaty would give all member states access to DNA and fingerprint data, as well as vehicle registries, for example. It would allow them to ask other states for police reinforcements in cases of serious accidents or major international sport competitions, as it did during last year's soccer World Cup in Germany.

The German security program for its EU presidency also called for closer collaboration on monitoring and analyzing Web sites used by terrorist organizations, as well as better protection for critical infrastructure against a terrorist attack.

The ministry's security program said that the distinctions between domestic and foreign security were disappearing. Threats were often rooted outside of the EU. Member states therefore must work even more closely together on foreign relations, the paper said.

Maintaining a dialogue with its neighbors, with the United States, Russia and other third countries was in the basic security interest of the EU, the program said. In particular, the strategically important transatlantic relations needed to be strengthened. Challenges such as fighting international terrorism affected the United States and Europe equally and could be dealt with only by working together, the ministry said.

Germany will host an informal meeting of EU justice and interior ministers in Dresden from January 14 to 16, 2007 to discuss its recommendations.

Germany's growing economic, political and military role is under the spotlight in 2007 with Berlin holding the rotating presidencies of both the European Union and the G8 club of industrial nations. (02.01.2007)

Row Over Shooting Down Planes Rekindles in Germany

Germany's interior minister wants to change the constitution to allow the military to shoot down planes if terrorists use them as weapons. The plan has been harshly criticized by others. (02.01.2007)

Germany took over the rotating EU presidency on Jan. 1. DW-WORLD.DE has prepared a dossier with background information on pressing issues that are likely to come up while Berlin leads the 25-nation bloc. (27.11.2006)