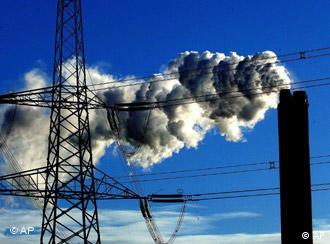 The EU energy strategy will be debated on Feb. 20 in Brussels

The commission presented the plan as the gateway to a "post industrial revolution" amid deep concern over the reliability of supplies from Russia, breaches of EU energy principles by member governments and global warming.

After recent oil spikes and tensions with Russia over its gas and oil shipments and signs that some EU governments prefer national policies, EU Commission President Jose Barroso called on the 27-nation bloc to "face new realities" with coherent EU action.

"Europe must lead the world into a new, or maybe one should say, post industrial revolution -- the development of a low carbon economy," he told journalists. "We have already left behind our coal-based industrial past, it is time to embrace our low carbon future." 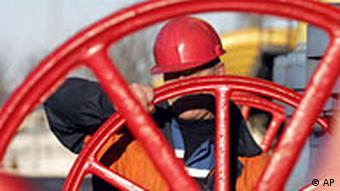 The EU's worried about the reliability of Russian gas

The plan is being published after a year of concern over the reliability of supplies from Russia, in the forefront again over renewed tension between Belarus and Moscow that has disrupted the flow of oil to western Europe.

It also follows months of attempts in Europe, notably sparked by takeover moves in France and Spain, to put national energy interests before the spirit of a common EU approach.

The commission's proposals hold that a delicate overall balance in energy policy can be achieved with firm commitments to limit greenhouse gas emissions up to 2020 and to lift the use of renewable energy sources. 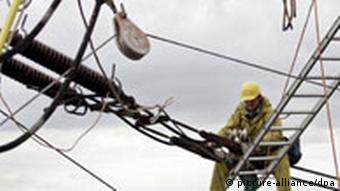 Could companies stop investing in power grids if the EU threatens to take them away?

At the same time, big integrated energy groups could be required to "unbundle" some of their activities, such as splitting off power grids, to avoid conflicts of interests and fuel new competition in markets the commission finds too cozy for industry.

Separately, the commission found after a probe of more than 18 months that the energy market in the EU was too concentrated in the hands of companies that controlled supply, generation and infrastructure, stifling competition from newcomers.

Germany's Federation of Gas and Water Suppliers criticized ideas to split up energy companies, saying that such a move would practically mean disowning companies.

A federation official added that as a result, companies could also stop investing in power grids if they had to fear losing them later on.

The commission also wants to bolster Europe's commitment to fighting climate change, in particular by proposing a target to limit emissions by 2020 after current ceilings under the Kyoto Protocol run out in 2012.

Under the Kyoto Protocol, developed countries are supposed to reduce their emissions by 5 percent by 2012 from 1990 levels and the EU has a higher target of 8 percent. 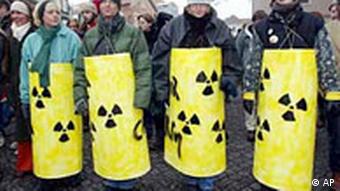 Germans have decided to phase out nuclear energy

To achieve that goal, the EU Commission also calls for the promotion of nuclear energy, which is being phased out by several countries, including Germany.

While saying that it was up to each member state to decide, EU Energy Commissioner Andris Piebalgs said that nuclear power generates energy with nearly no production of greenhouse gases. He added that the Commission wanted to "encourage debate" about the issue by "putting the facts on the table."

"If they put excessive emphasis on atomic energy in their energy policy, then we'll have a debate with the Commission," Gabriel told Germany's ARD public television on Wednesday.

The commission's plans will be submitted to EU heads of state and government at a March summit with a view to forge a broad-ranging common energy policy.

Until now energy policy has been largely conducted along national lines, but recent oil price jumps and disruptions of Russian gas supplies last year have focused leaders' minds on an