European Papers Give Cool Reception to New EU Members | Europe | News and current affairs from around the continent | DW | 02.01.2007

European commentators on Tuesday had mixed reactions about Bulgaria and Romania's entry into the European Union. 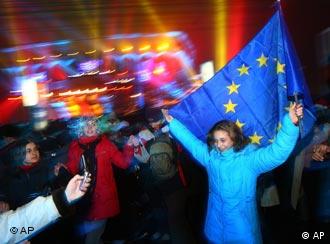 Both Romania and Bulgaria are enthusiastic about being in the EU

Two British newspapers welcomed former communist states Bulgaria and Romania to the European Union, saying their admission would be an economic and political boon to all.

"This is a moment for celebration," The Independent said in

an editorial about the accession of the two states on New Year's Day on Monday.

"Every Warsaw Pact country outside the former Soviet Union is

"The reunification of western and eastern Europe after decades

of division is complete," the paper wrote. 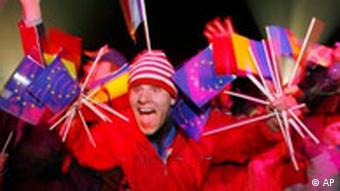 A Romanian cheers his country joining the bloc

"Two more nations have embraced the EU ideals of democracy, respect for human rights, the rule of law and free market economics," it said.

"Bulgaria and Romania are small but fast-growing economies," The Independent wrote. "The whole of Europe will benefit materially from their inclusion and the extension of the single market."

"The question both countries should ask is, to paraphrase US

"They bring a thirst for democracy, stability and wealth to a part of the Balkans that has suffered centuries of turbulence," the paper continued.

"They have shown themselves eager to participate in regional and global peacekeeping and environmental action."

The Times, however, cautioned that Europe needs time to assimilate its new members before contemplating further enlargement.

Spain's El País agreed, saying that EU expansion had ended for a while.

"The EU is no longer capable of accepting more members due to the stalled EU constitution," the paper said. "The bloc isn't able to function properly with the 25 members it's had."

"The last expansion was far too hasty," El País surmised.

Bucharest had more than just the New Year to celebrate

The Flemish paper De Morgen pointed out that Bulgaria and Romania have failed to meet some of the EU qualifying criteria on tackling corruption, organized crime, reforming their criminal justice systems and guaranteeing food safety standards.

"Though progress has been made in fighting organized crime, the Mafia in both of these Balkan states is still very powerful," the paper wrote.

"That is why Bulgaria and Romania will have to be taken by the hand for at least the next three years and account to the EU for every move it makes," De Morgen commented.

With 27 nations and 480 million people, the European Union stretches from the Atlantic Ocean to the Black Sea.