New Year Rings in EU Membership for Bulgaria, Romania | Europe | News and current affairs from around the continent | DW | 31.12.2006

Bulgaria and Romania are to hold a double New Year's celebration as the two former Soviet bloc states become the newest members of the European Union at the stroke of midnight Sunday. 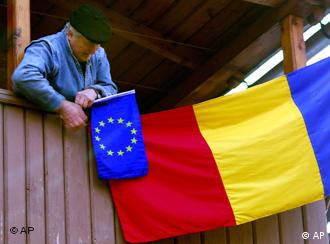 New Year's eve celebrations in Romania and Bulgaria will be especially poignant this year as the two former communist east European countries mark their accession to the European Union on Jan 1.

However, the two poor Black Sea neighbors join a club that is increasingly hesitant to admit new members after its historic eastward expansion in 2004.

With enlargement fatigue gripping large parts of the bloc, the EU's latest and poorest members may thus be greeted with a shrug rather than with open arms. Besides, EU headquarters in Brussels will be keeping a close eye on whether the two nations abide by their pledges to crack down on corruption and organized crime.

Meanwhile, in a clearer success story, all is ready for EU member Slovenia to become on January 1 the first former communist state to adopt the Union's common currency, the euro, officials said in Ljubljana.

Thousands of revelers were expected to flock to a gigantic rock and pop concert on Alexander Battenberg square in the Bulgarian capital, Sofia. The show will be interrupted for speeches by President Georgi Parvanov, Prime Minister Sergei Stanichev and European Commission President Jose Manuel Barroso. But the partying is expected to continue long into the night. 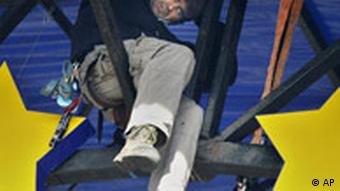 A pyramid of light will illuminate the sky above Sofia, its five rays emanating from the city's Orthodox cathedral, its Armenian church, a synagogue, a church and a mosque.

In Bucharest, European parliament president Josep Borrel and other dignitaries including foreign ministers from Germany, Bulgaria, Denmark and Hungary are to meet with Romanian President Traian Basescu and Prime Minister Calin Tariceanu for a countdown until midnight, and adhesion to the EU.

The latest Euro barometer poll published in December shows that at the eve of accession 63 percent of all Bulgarians and 69 percent of all Romanians think their eastern European states will largely benefit from EU membership. This is above the European norm where the average approval of membership hovers around 54 percent.

Together with Greece, the two newcomers will be the only Balkan nations in Europe's rich club, and will play a key role as representatives of a region ravaged by the wars in the former Yugoslavia.

Political analyst Ivan Krastev of the Sofia-based Centre for Liberal Strategies told AFP that "with the accession of Bulgaria and Romania the region will receive a clear message that enlargement is not dead."

EU leaders agreed December 15 in Brussels to put the lid on further enlargement of the bloc. The decision has major repercussions for EU hopefuls in the Balkans such as Croatia, which is at the front of the queue and expected to join by 2010. 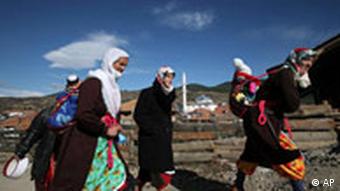 The gap between Bulgaria and Romania and the current EU members has raised fears of a sharp rise in prices after January 1 in the newcomers where average monthly salaries are about 200 euros ($260).

Perhaps due to people fearing instant inflation, Bulgaria this month saw a 30 percent rise in purchases compared to the usual end of year holiday spending spree. Romanian hypermarkets also reported higher sales towards the end of the year with French Carrefour posting a 45 percent rise in 2006 compared to 2005.

Bulgaria and Romania will be subjected to unprecedented monitoring by Brussels, due to lagging reforms.

The fight against crime and rampant corruption, management of the European funds and food safety will be particularly placed under Brussels' magnifying glass. Bulgaria will also have to carry out reforms to make its judiciary more efficient, with several notorious criminals managing to avoid imprisonment.

If progress is slow, the enthusiasm of the two newcomers risks being clouded by restrictions, including partial suspension of agricultural subsidies and non-recognition of the decisions of their courts in Europe.

Another problem is allowing borders to fall totally. Fearing a flood of cheap labor, Spain, Britain, Denmark, Hungary, Ireland, France and Greece have announced restrictions on workers from the two incoming states.

As a precondition for joining the EU, Bulgaria pledged to shut off two working nuclear reactors by Jan. 1. But the country is dragging its heels – with reason, some say. (28.12.2006)

Meglena Kuneva has been Bulgarian minister for European affairs since 2002. Now the country's designated EU commissioner, she's slated for the consumer protection portfolio once Bulgaria joins the EU on Jan. 1, 2007. (03.12.2006)