The euro prepares for a digital makeover | Business | Economy and finance news from a German perspective | DW | 09.10.2020

The euro prepares for a digital makeover

Can paper money keep up in a world marked by a pandemic, extreme weather and rapid digitalization? The ECB has announced plans to develop an electronic form of Europe's most used currency. 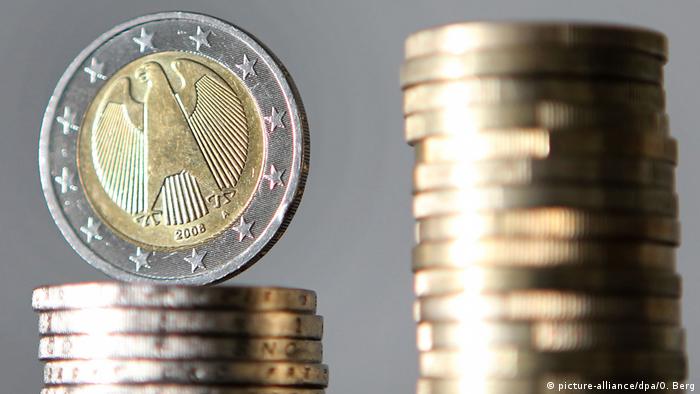 Considered by many to be a symbol of European integration, the European Central Bank (ECB) recently announced it would pursue the possibility of issuing an electronic form of the euro, the official currency of 19 of the European Union's 27 members.

A digital euro "would have pervasive effects on society as a whole," wrote the authors of "Report on a digital euro," an analysis of the subject from the European Central Bank released on October 2.

Cash currently remains the most common way of making small retail payments, accounting for 73% of all physical retail payments in the euro area in 2019, ECB President Christine Lagarde said in a speech in September, citing a forthcoming ECB study.

"But almost half of consumers said they prefer to pay digitally, and this has increased further during the pandemic," she continued.

A decline in the use of cash would make people and businesses in the euro area dependent on other, private forms of payment, the authors of the digital euro report concluded, a trend that has potential for serious and wide-reaching consequences if left to develop unchecked.

"Looking ahead, we need to be ready to introduce a digital euro, shall the need arise," Lagarde said in the report.

What is a digital euro?

Some Europeans might be scratching their heads at the idea of a digital euro, picturing the countless digital transactions they've made using online bank accounts. What would the difference be?

"The main difference would be that such a transfer would be in central bank money, the safest means of payment," Ulrich Bindseil, director general for market infrastructures and payments at the ECB, told DW. "It would be as safe as cash — but digital. Currently, electronic transfers between citizens' deposits take place in so-called commercial bank money."

Stressing this last point, professor of economics at the University of Hohenheim Michael Evers emphasized the significance of a digital, central bank currency that can be used for direct, instant, peer-to-peer payments, just like physical cash.

"This should be game changing as this implies that the ECB would be directly governing monetary payments," he told DW. "The credibility of the payment system then depends on trust in the ECB and no longer in banks or the financial system."

Preparing for the inevitable

Today there are many digital payment solutions available to anyone looking to buy or sell, from online transfers through commercial banks to transactions through third-party services like PayPal to cryptocurrencies like bitcoin that allow for anonymous, non-traceable digital payment transactions.

But this variety of choice is problematic for central banks for several reasons.

"The maintenance costs of the cash infrastructure relative to the number of cash transactions might increase beyond acceptable limits and could accelerate the decline in the availability and acceptance of cash," the authors of the report wrote.

Essentially, if people stop using cash, it could become too expensive to print and distribute.

The ECB also has its mandate to fulfill. The bank is tasked with maintaining price stability in the euro area by setting interest rates and other monetary policy measures. But the growing use of alternative currencies and payment systems could pose a threat.

"The ECB is not the player that is proactively shaping the future payment system of their own choice," Evers said. "Quite the contrary, it is responding to private financial innovation that is lowering transaction costs and facilitating cashless instant payment systems."

Evers points to Libra, a payment system in development at Facebook, which the social media company wants to roll out for use by some 2 billion Facebook users worldwide.

"Such a private payment system would undermine any sovereign monetary authority and pose a true threat on effective monetary policy transmission," he said.

Concern over "extreme events that could hinder the provision of payment services" is another ground for having a digital euro at the ready. Should an event prevent the use of standard payment methods, like cash or electronic bank transfers, the bank wants a digital currency system in place to keep the financial system running.

The coronavirus pandemic is the perfect example.

"The COVID-19 crisis induced a shift in payment habits toward contactless payments and e-commerce," the report said. Many initially feared the virus could be spread via cash and coins, and many economies, even cash-loving Germany, accelerated the transition to contactless payments as the pandemic took hold. The weeks-long lockdowns around Europe that kept people largely confined to their homes also saw many turn to e-commerce out of necessity.

Extreme events could also include cyberattacks and natural disasters, both growing threats in a world marked by digitalization and climate change. Power outages that prevent cash withdrawals or the use of online banking could cause serious harm to the functioning of the financial system.

"While cash remains the safest contingency solution for payments at the POS [point of sales] in the event of cyber incidents and other extreme events, the digital euro, as an alternative electronic means of payment, could be used in physical shops also," the authors wrote.

Cash to the future

What exactly a digital euro would look like, and how it would be adopted, are as of yet unknown.

"A digital euro would have to take into account people's individual rights, such as the right to privacy," the ECB's Binseil said, noting challenges that could lie ahead. "When we develop functional and technological designs we will have to tackle these issues."

The ECB also faces the hurdle of developing a product that revolutionizes the financial system without upending it.

"A digital euro could hamper the activity of banks or generate instability in times of financial stress," Binseil added. "But a properly designed digital euro can address these risks."

In the long term, Evers says the competition between central bank digital currencies and other private money and payment networks — as opposed to physical versus digital cash — is the real fight to watch.

"New currency areas might not be determined through national borders or economic unions like EMU [The Economic and Monetary Union of the European Union], but through social networks," or other commonalities, Evers said.

The ECB report stresses that development is in its initial stages and that the next step is to open a dialogue with all stakeholders, including euro area citizens. A public consultation is to begin on October 12.

ECB: Report on a digital euro