Picking up the pieces: The story of East Germany′s central bank | Business | Economy and finance news from a German perspective | DW | 29.06.2018

Picking up the pieces: The story of East Germany's central bank

This week marks the 28th anniversary of the monetary union between East and West Germany. What promised to be a healing cure-all for both sides killed the East German mark and is still a work in progress today. 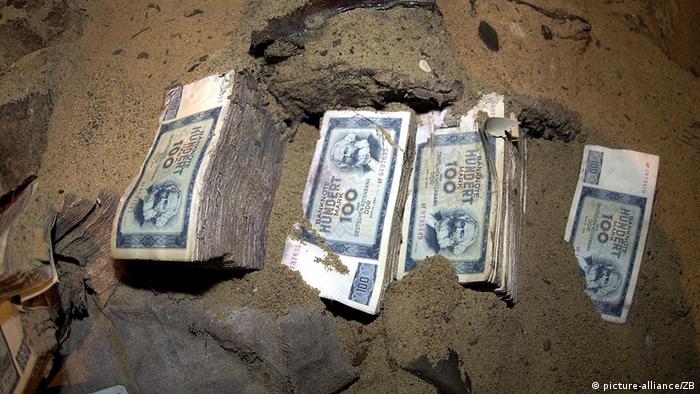 The Berlin Wall fell on November 9, 1989. A few months later on Sunday, July 1, 1990, the East German central bank handed over its monetary policy sovereignty to West Germany's Bundesbank — more than three months before the two countries actually became one.

Suddenly the East German mark, called Mark der DDR, was out and the West German mark was officially in as the country's sole legal tender. Money in East German banks was automatically converted. But the nearly 17 million East Germans only had six days to convert their hard cash or lose it. 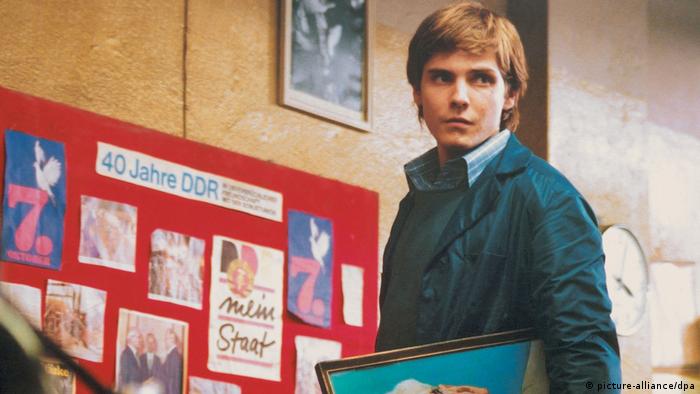 In the film Good bye, Lenin! staring Daniel Brühl, the family discovers a stash of East German marks, but the deadline to exchange them has passed and their mother's life savings is worthless

There were no actual exchange counters where currencies changed hands. All East German marks had to be deposited in a bank account in order to be exchanged. Cash found after July 6 was worthless. The race was on.

Unity at any cost

But why the rush without knowing the true state of the East German economy like its productivity or competitiveness? Professor Wilfried Fuhrmann, a monetary expert and economist at Potsdam University, thinks then Chancellor Helmut Kohl was primarily interested in quick decisions which would make going back on unification impossible. He wanted to seal the deal at nearly any cost.

The staggered exchange plan blatantly went against the Bundesbank's advice based on an economic assessment. Many called it a generous rate, others called it a massive subsidy for the East — paychecks, rents and retirements were converted 1:1. Fuhrmann sees the advantageous exchange rate as a means to ensure that regular East Germans had a small puffer, since most had limited savings anyway. 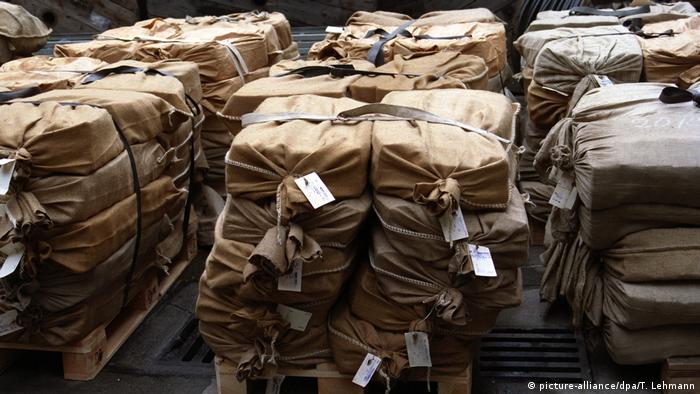 The restrictions put on this rate were meant to find illicit money and to stop speculators and insiders from becoming millionaires overnight. Yet Fuhrmann nonetheless feared a "rude awakening" looming on the horizon because of hasty and opaque decisions: "The complex 'exchange' mechanism reinforced unrealistic ideas" and led to an enormous rise in mistrust from the East German side.

The exchange rate likewise "forced many companies into bankruptcy by overvaluing the East German mark and squeezed the competitiveness of East German companies, thus increasing unemployment and fueling westward migration," he says, "the consequences of which we still see today."

From the very start, the East German central bank fought an uphill battle. The monumental upheaval at the end of the Second World War was just the beginning. The country was ruled by the four victors. Germans themselves had little say. The old Reichsmark was still the official currency, though the black market was booming. Saving was pointless, only survival mattered.

To help get the country back on track and at least create the semblances of financial stability, the Soviets set up and consolidated a series of institutions in East Germany to look after monetary policy.

After the western zones announced a currency reform in mid-1948 and created the Deutsche Mark, the Soviets did the same in their occupation zone. The end result was the Deutsche Notenbank and the introduction of East German's own separate currency. Many see this as the point of no return for the division of the country into two parts.

In 1968, the bank was rebranded as the Staatsbank der DDR. Like most central banks, the Staatsbank was responsible for issuing money and controlling the cash in circulation. But it was also subordinate to the finance ministry. So it was additionally in charge of processing accounts for the state-owned institutions and state-run enterprises. It was also a dogged pursuer of foreign currency within the country — an attempt to stave off a parallel currency or black markets.

Although the bank had always been under the thumb of the government, a 1974 law reinforced this status by making the bank a part of the ruling Council of Ministers, thereby removing any illusion of independence. German unification 16 years later didn't take politics out of finance.

Most importantly, after the monetary union the responsibility of East Germany's central bank did not fall on the West Germans. So while the Frankfurt-based Bundesbank became a knight in shining armor, the former central bank in East Berlin was left with the thankless job of picking up its own pieces. 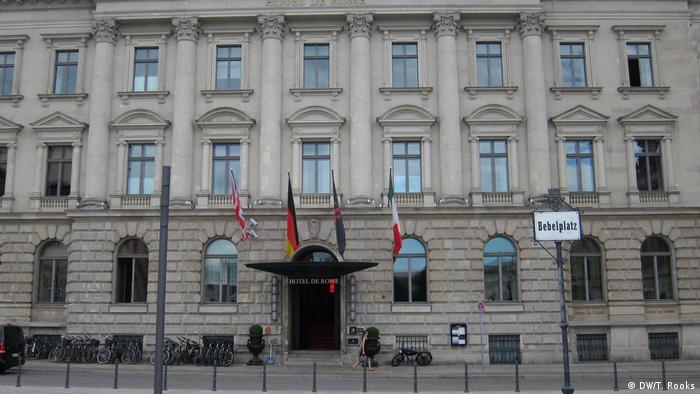 Offices of the former East German central bank were used as a backdrop for the 1998 film Run Lola Run. It is now a five star hotel

After losing its reason for being, most of the bank's property was sold, while its few assets — worthless marks, employees and archives — were handed over to Staatsbank Berlin before finally landing at the Kreditanstalt für Wiederaufbau (KfW), a government-owned development bank, in 1994.

But what happened to all that East German cash? According to KfW, in the runup to the monetary union, 620 million notes with a value of 17.8 billion marks were deposited for exchange. In total, 431 billion East German marks were exchanged for the West mark, 62 billion of that at a 1:1 exchange rate, the rest at the higher 2:1 ratio.

Suddenly banks were inundated with worthless currency and had to find a solution. Coins weighing 450,000 tons and nominally worth 640 million marks were simply melted down right away for their metal — mostly aluminum.

Paper money though had another life of its own. All of the notes, including the cash collected during the monetary union and the never-issued 200- and 500-mark notes, were gathered and hidden in underground tunnels near Halberstadt in rural Saxony-Anhalt. It was assumed that moisture mixed with the poor quality of the notes would lead to their decay, but that didn't happen. 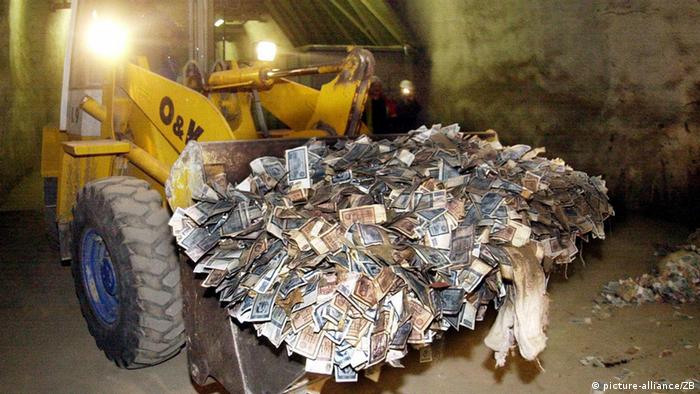 Printing money is not cheap, either is destroying it. Here deep underground workers are unearthing piles of East German marks to be incinerated. This huge project cost an estimated €500,000

After break-ins and thefts, the KfW caretakers decided to speed up the process. In early 2002, all that remained of the 3,000 tons of the cash was dug up. Eventually 298 truckloads were sent to an incinerator, mixed with household trash and burned, bring an end to part of East German history.

But this end was not really as final as imagined. A lot of savers did not make the six-day deadline to turn in their Eastern marks. Banknotes worth 600 million marks and coins worth 960 million marks are still out there. Additionally, 4.4 million private East German bank accounts with 900 million marks and 74,000 business accounts holding 3.2 billion marks were not converted because the proper applications were not filled out, they were simply forgotten, or the owner was deceased.

The frantic and hurried monetary union not only killed the East German mark and destroyed billions in savings, it also closed the country's account books for good. At the end of the exchange period, the West Germans were able to see and understand the financial assets of their future citizens in a few figures. Yet despite the clarity on this question, many surprises were waiting just around the corner.

But for Helmut Kohl it was all about getting into the history books and not about economic reality, says Wilfried Fuhrmann. Unification was unstoppable and the West Germany mark was triumphant — and can be indefinitely exchanged for euros — while its poor cousin was at first literally left to rot. What remains of East Germany's central bank are only memories and 1.5 billion worthless marks.

How will history look at Kohl's legacy?