A visit to the Berlin headquarters of the state-owned KfW bank is full of surprises. Its basement contains a treasure trove of relics of East German history, including the 500-mark note that never saw the light of day. 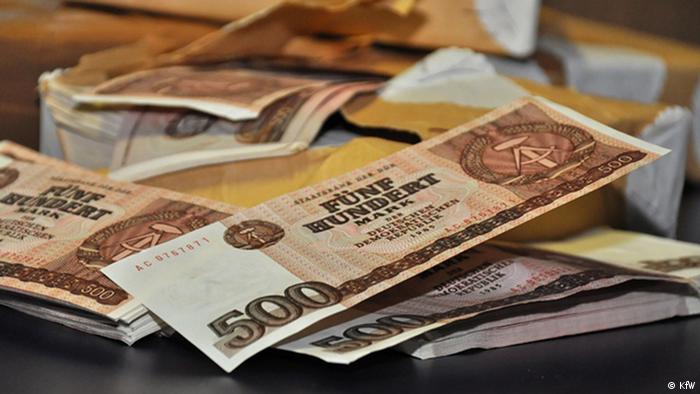 It felt a bit unreal to carry a large paper bag full of banknotes through security at Frankfurt airport, Lysann Goldbach laughs as she tells the story. One million marks in cash. The airport staff suspected money laundering.

The 36-year-old tried to explain, but was treated with suspicion. It was only when an older security guard arrived that they believed her.

"Yes, these are East German marks" she confirmed.

Where did the banknotes come from?

Goldbach works at the state-owned KfW bank, which was formerly tasked with rebuilding the economy of Germany's east. She is the director of its historical archive, which includes the legacy of the former East German central bank, the "Staatsbank."

In the 1980s, the Staatsbank's vault contained large numbers of freshly printed 200- and 500-mark notes that never entered circulation. A banknote worth a month's salary seemed inappropriate to the communist country's leadership. 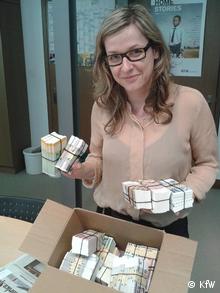 But years after the fall of the Berlin Wall, these bills kept appearing at various locations in Germany.

Where did they come from? They must surely have been stolen.

The western German city of Frankfurt is where the police confiscated the latest batch of these notes. After prosecutors finished their investigations, they turned the currency over to the KfW. The banknotes could only have gone on the market as a result of a break-in, Goldbach says. She said she wasn't aware of the details.

The story begins in 1991, the year after German reunification. All of East Germany's now-worthless paper money was buried in two sandstone caverns near Halberstadt, in the eastern state of Saxony-Anhalt. It was expected to slowly rot.

Following its 1994 merger with the successor to the East German central bank, the KfW became the owner of the money. It assumed it was safe in the underground facility.

But then East German banknotes started surfacing on the collectables market. Thieves had gained access to the caverns. So in a complex operation, the KfW removed the banknotes from the cavern and destroyed them in March 2002. At least it thought it had. But 200- and 500-mark East German banknotes keep appearing - like those in Frankfurt. Dealers are said to be willing to pay 15 euros per bill.

This latest batch of millions has made its way directly to the archive. Now the notes are back in a vault in Berlin in "one of the most beautiful places in the capital," she said. "We can't be much more specific than that about the location."

The Wall Street of the Weimar Republic

The KfW Banking Group has its headquarters near the picturesque Gendarmenmarkt square in the center of Berlin. This area was once the Wall Street of Germany. In 1914, about 170 banks were based in the immediate area. 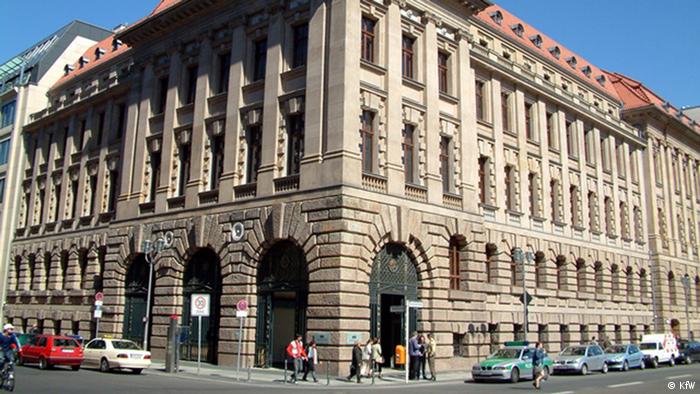 This building was once the financial powerhouse of Berlin

But the most impressive building, designed by the architect Alfred Messel, was the seat of the Berliner Handels-Gesellschaft, which played a key role in financing the city's growing industrial might. It was headed by the Jewish banker Carl Fürstenberg.

Some 40 supervisory boards once met here, from Siemens to AEG. Fürstenberg spared no expense on the building and spent 2.6 million reichsmarks for the second phase alone. It was completed in 1900, and subsequently extended.

In 1933 Fürstenberg died and his son Carl was forced to flee with his family from the Nazis. During World War II the building was partly destroyed. In 1945, the Red Army seized everything. Later the East German central bank moved in. It was responsible for the issuing of banknotes and reported directly to the government.

Cars made of East German coins

Today, the vault store contains design proposals for East German banknotes. Goldbach shows graphic submissions that were never implemented because of the unification of the two German states on October 3, 1990. On July 1 that year, Germany's currency union took effect. The West German Deutschmark also became the sole legal tender in East Germany, as an important step to unity.

"Look here, these aluminum chips were sold to the automotive industry, melted down and recycled. Automobile parts were probably made from old East German coins." Goldbach winks as she says this, then rummages in a box and produces some East German coins. The coins look like play money. She says she has no idea how many are still left in private homes or secret hiding places.

"Of course not everything was handed in, and now the coins are worthless." Goldbach describes the hectic time of the currency union. "Here, on the last possible day to exchange money, representative from industrial combines and state enterprises queued in the banking hall to convert their last remaining stocks of East German money."

Erich Klober was then a central bank executive; he later joined the KfW. He recalled these turbulent times in an interview with DW. After November 9, 1989, when the Berlin Wall opened, there was "optimism" - but "there were many arguments and confrontations. This ultimately led to the reform of the East German banking system."

In Berlin, Goldbach shows printing plates for bills with a nominal value of 5 marks, test imprints and watermark templates. It's not only fascinating to archivists. 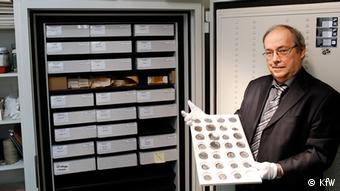 Jürgen Pallokowski worked here 35 years, both for the central bank and for the KfW. He retired in 2012. "In the 35 years of my work as a documention officer, my role and my responsibilities changed dramatically. The times at the East German central bank were marked by an information system that was subject to social regulations," he says guardedly. "With the end of communism and the years at the KfW, communication was open."

Meanwhile, the KfW has around 250 annual requests for access to the archive. For the 25th anniversary of the end of the Berlin Wall, the number of enquiries has increased again.

Koreans, whose own country is still firmly divided, are frequent visitors. They want to know what monetary union was like and marvel at the well-preserved notes and detailed design portfolios. Finally, all want a tour of the impressive building. The KfW has carefully restored and renovated its headquarters.

KfW Senior Director Martina Köchling recalls with pride: "Following the merger with the former central bank, the KfW took over responsibility both for its employees and for the historically and architecturally significant buildings in the heart of Berlin. "We took on all of the employees, and this listed building has been painstakingly restored in consultation with the historic preservation authorities."

This means the historic building can once again be admired in its original splendor. Goldbach is particularly proud of the Maple Room. Together with a ceiling height of at least six meters, its beautiful, almost perfectly preserved wood paneling and a huge stately fireplace give the room an imposing appearance.

It was a stunning way to receive the wealthy clients of the former Berliner Handels-Gesellschaft. But it's harder to imagine that under communism, this was a police station. Goldbach shows old photos from the 1980s in which the floor was covered with cheap linoleum and the high ceilings were hidden under polystyrene tiles. People's Police officers stare into the camera.

Goldbach studied in nearby Potsdam - also once in East Germany - and is passionate about economic history. On November 9, 1989, she was 11 years old. How did she experience the fall of the Wall? "The day after the Wall came down there were only five kids in my class - the rest had gone to look at the West. I was not allowed to, because my parents only wanted to go by themselves. They thought it would be safer," she says, laughing.

Finally, she takes the 500- and 200-mark banknotes, put them back in the paper bag and closed the vault. These relics of East Germany will not be resurfacing soon.