Thailand′s king should not reign from German soil, Berlin says | Asia | An in-depth look at news from across the continent | DW | 16.10.2020 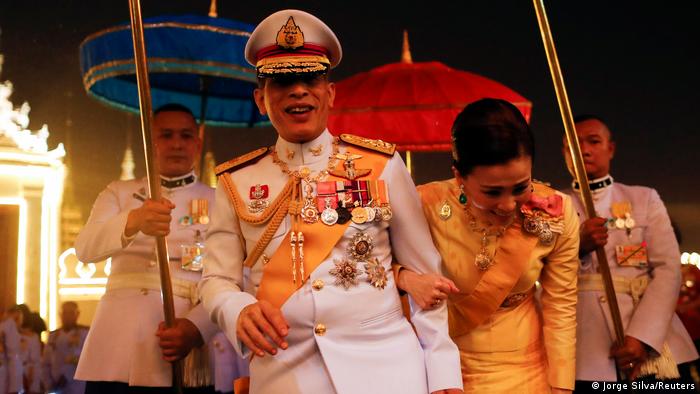 Thai protesters are continuing to take to the streets in defiance of a ban to assemble. They are demanding the resignation of Prime Minister Prayuth Chan-ocha — a former army general who first came to power in a 2014 coup . But demonstrators are also calling for the constitution to be amended and for the country's powerful monarchy to be reformed.

"People want to really go to the roots of their grievances," Janjira Sombatpoonsiri, political scientist and associate at the GIGA Institute for Asian Studies told DW. "When they look to the root causes of the problem, they see the regime composition as the cause of their problem, and I think the palace is one of these."

In Thailand, the monarchy is revered almost as a divine force and has great influence within Thai society. The current king, Maha Vajiralongkorn, ascended to the throne in 2016 and has since sought to increase his direct control over the country's institutions. He ordered two army units to be put under the authority of the palace and was given control of the crown's multi-billion-dollar holdings by the legislative assembly.

But one thing that is also sparking the protesters' anger is the king's decision to spend most of his time not in Bangkok, but in Germany.

Since 2007, the Thai king has spent long periods of time in Bavaria in southern Germany. He owns a villa in the lakeside town of Tutzing, but recently also sojourned at the Sonnenbichl Hotel in Garmisch-Partenkirchen. The king's 15-year-old son even goes to school in Bavaria.

The king's presence in the region is often reported on in German tabloids, and photos of the monarch riding his bicycle in the area have surfaced online.

Thai protesters have criticized both his absence from Thailand and the cost of his stays in Germany.

Junya Yimprasert left Thailand in 2010 and now lives in Europe. She has been campaigning to showcase what she sees as the monarchy's grave failings for years.

She told DW that as Thailand's head of state, King Vajiralongkorn shouldn't be conducting official business from abroad.

"The Thai people are getting angrier because he is not in Germany just as a tourist and hasn't stopped intervening in Thai politics," she said. "He is here in Germany and continues to have influence."

With her organization Act4Dem, she has carried out a series of protests across Germany in collaboration with the German non-profit organization PixelHELPER to raise awareness and push for change in Thailand.

She has projected slogans criticizing the king on buildings all over the country, including the German Parliament and the Sonnenbichl Hotel. 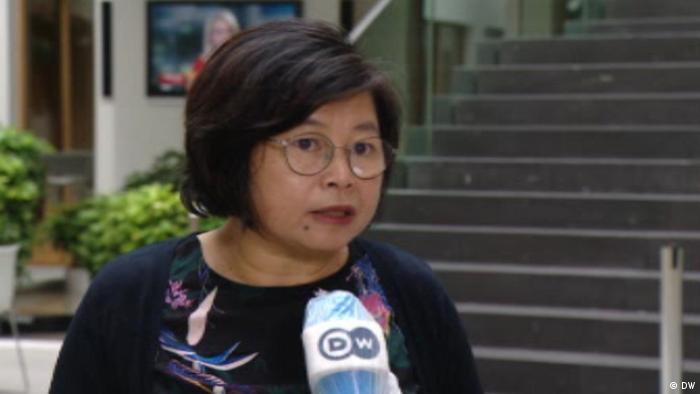 Junya Yimprasert is the founder of activist group Act4Dem, J

Yimprasert has now delivered a letter to German Chancellor Angela Merkel and to the speaker of the German Bundestag, Wolfgang Schäuble. She wants Germany to take action on the king's stays in Germany.

It's not only Thai protesters who are concerned about the king's status in Germany.

German lawmaker Friethjof Schmidt of the Green Party told DW that King Vajiralongkorn has a visa for Germany as a private person, but that he also has diplomatic status through the Thai embassy.

While in Germany, the king forbade his sister to run with a political party before the last elections, and he receives visits from Thai officials and dignitaries, activities Schmidt believes should be considered political.

Responding to a question posed by Schmidt in the German Parliament, Foreign Minister Heiko Maas said the government had made clear that "politics concerning Thailand is not to be done from German soil."

He added Germany "would always oppose having guests in our country who run their state affairs from here."

A spokesperson from the Foreign Ministry said this position had been communicated to the Thai ambassador on several occasions, and that the Thai side had given assurances that government business in Thailand is conducted by the prime minister, while the king is in Germany for private reasons.

After being in Germany for almost six months during the height of the coronavirus pandemic, King Vajiralongkorn recently returned to Thailand, where he is expected to stay for a few weeks. His return was marked by the protests — a new sight for Thailand in recent years, and a sign that the tide in the country may be turning.