Thailand′s young pro-democracy protesters challenge military and monarchy | Asia | An in-depth look at news from across the continent | DW | 16.10.2020 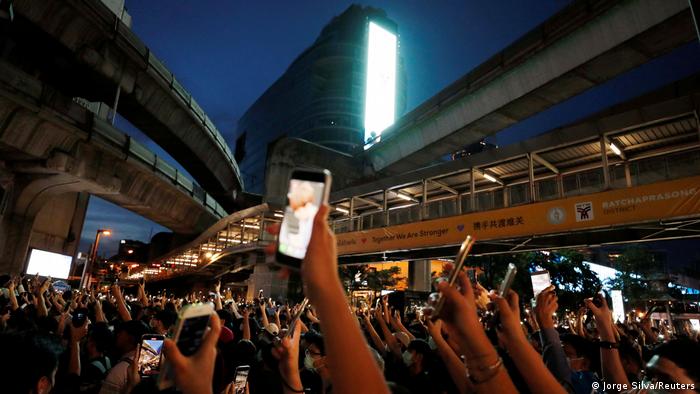 When Thailand's premier, Prayuth Chan-ocha, declared a state of emergency in Bangkok on Thursday morning, it was supposed to be the final warning shot towards the pro-democracy protest movement.

The emergency decree bans gatherings of more than four people. Anyone publishing news or online reports that "harm national security or cause panic" is liable to prosecution.

However, the pro-democracy movement showed surprisingly little concern. Only a few hours after the "state of emergency" was announced, around 10,000 anti-government protesters had gathered at Ratchaprasong intersection in central Bangkok.

Shouts of "free our friends" were heard echoing through the capital's popular shopping district.

The protesters are demanding the release of leading pro-democracy figures, who were arrested at the protest camp outside Thailand's Government House shortly after the state of emergency was declared early Thursday morning.

The government said the measures were "necessary" to end the rampant street protests and maintain "calm and order."

Thailand's form of government places the king as head of state, with King Vajiralongkorn officially ruling as a constitutional monarch. True power rests with the prime minister, former army general Prayuth Chan-ocha, who is supported by a built-in majority in parliament.

On Wednesday, a car convoy carrying the Thai royal family crossed through a large group of demonstrators, who flashed the movement's three-finger "hunger games" salute at the queen and her son.

"We were shouting our slogans at the security force, when the royal limousine suddenly appeared," activist Ekachai Hongkangwan told DW. "We were very perplexed because the official route they announced was totally different."

In the past, Thais were only allowed to approach the royal convoy on their knees.

Questioning or defying the Thai monarchy, which used to be more taboo, makes many older Thais uncomfortable. They were taught to adhere to tradition and revere the military and the monarchy.

"Liberal thought has not fully caught on in Thailand, and at the same time, indoctrination is rather strong. Many adult Thais feel uncomfortable when it comes to the royal family," Micheal Nelson, a political scientist in Bangkok, told DW.

In addition, people in Thailand are taught from an early age to respect authority and refrain from criticizing people of higher rank. The "Pu Noi," as younger people are called, has to obey the "Pu Yai," the adults, and not to contradict them.

However, Thailand's deeply rooted value system is being rejected by the young protesters, many of whom are less than 25 years old and have been socialized with free access to information online.

They are up against a bulwark of deeply anchored traditions and social hierarchies, along with the military-aligned government, which came to power in a 2014 coup and has further reduced the space for public criticism.

The conflict also seems to be increasingly taking place in Thailand's schools. According to a survey by the media faculty of Silpakorn University, there were 115 cases of assault and harassment by teachers against rebellious students in August and September. Further surveys on the issue are underway, faculty said.

Thailand's pro-democracy activists can hardly expect support from Southeast Asian countries, some of which do not want a spotlight on their own authoritarian governments, and also reject interference in the affairs of other countries within the framework of the Association of Southeast Asian Nations (ASEAN).

However, the protesters have caught the attention of Germany's Greens. Last week, Green party parliamentarian Frithjof Schmidt asked German Foreign Minister Heiko Maas if ongoing negotiations over free trade agreement with Thailand could again be put on ice if the political situation does not improve. Maas replied that it was "an option to work towards this in the EU."

Germany currently holds the rotating presidency of the EU Council.

"We are currently planning further parliamentary initiatives on the situation in Thailand and how the federal government will deal with it," Schmidt's research assistant, Laura Brehme, told DW.

"We are very grateful for the support from Germany," said a student protester in Bangkok, while a black, red and golden flag waved behind him.

For supporters of the military and the monarchy, "interference" from the West confirms an existing resentment towards Thailand's traditional political structures.

Many of the "ultra-royalists" are convinced that these inexperienced "children" do not possess the energy and initiative to challenge Thailand's ruling structures on their own.

They wildly assume there is some force in the background conspiring to brainwash youth on social media, be it opposition politician Thanathorn Juangroongruangkit, or foreign powers from the West.

When an old photo of the US ambassador in Bangkok together with student protest leader Parit Chiwarak surfaced last month, royalists put pressure on the US embassy until it had to declare in writing that "the United States government does not fund or support any protests in Thailand."