Thailand: Exiled activist′s disappearance sparks calls for justice | Asia | An in-depth look at news from across the continent | DW | 17.06.2020

Thais took to the streets and social media to denounce the disappearance of Wanchalearm Satsakit, a vocal government critic. His abduction has triggered a wave of protests and viral hashtags. 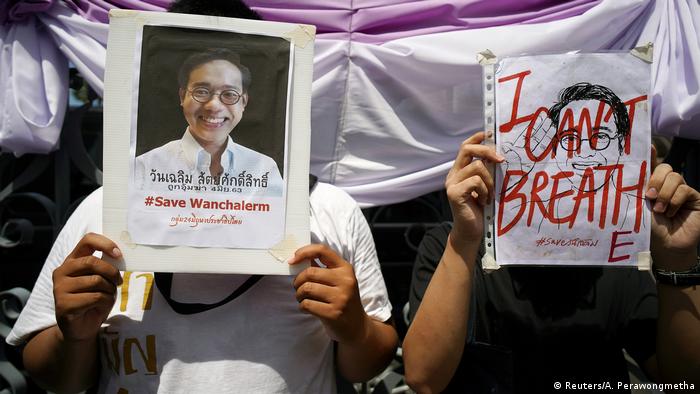 The disappearance of Thai activist and self-exiled dissident Wanchalearm Satsakit has spurred an unprecedented outcry on the part of Thai citizens, not seen on such a widespread level in response to other disappearances of Thai dissidents living abroad.

On June 4, Wanchalearm, 37, was seen on CCTV footage abducted from his apartment in Phnom Penh, the Cambodian capital, by armed men in a black SUV. The alleged abduction took place just a day after he had posted a video on Facebook criticizing Thai Prime Minister Prayut Chan-o-cha.

His sister Sitinan, who said she had been speaking with Wanchalearm at the time of his disappearance, told Prachatai website that her brother Wanchalearm screamed and said "Argh, I can't breathe," before the phone call was cut off.

Netizens immediately took to Twitter, with the hashtags #SaveWanchalearm – which was retweeted over 400,000 times within the first 24 hours after the event – and #ThaiCantBreathe – a reference to both Wanchalearm's alleged parting words on the telephone, and the "I can't breathe" slogan associated with the ongoing protests against police brutality and the killing of George Floyd in the United States.

"We're really entering a different era, and the degree to which people are upset over the Wanchalearm disappearance is one more sign of that," said Michael Montesano, the coordinator of the Thailand Studies Program at the Yusof Ishak Institute in Singapore.

"The Cambodian government is obligated to find out what happened to Wanchalearm, who was taken away at gunpoint in Phnom Penh, and ensure he is safe," said Brad Adams, the Asia director of Human Rights Watch (HRW).

Wanchalearm fled to Cambodia after a 2014 military coup, and is wanted for violating Thailand's Computer Crimes Act and Article 116 of the criminal code, which criminalizes writing that incites unrest.

Suspected enforced disappearances of Thai dissidents living abroad are not unheard of. Since 2014, at least nine exiled activists, including Wanchalearm, have gone missing, two of whom disappeared in Vientiane – the Lao capital – and were later found disemboweled, their bodies stuffed with concrete on the Thai side of the Mekong River. Last year, three dissidents living in Vietnam also disappeared.

"Over the past six years, Cambodia and Thailand have closely collaborated to harass, arbitrarily arrest and forcibly return exiled dissidents in violation of international law," HRW said in a statement. "Wanchalearm previously told Human Rights Watch he had occasionally been put under surveillance by Thai officials in Cambodia."

In addition widely shared hashtags and calls for Cambodian authorities to conduct a thorough investigation of the case, dozens gathered on Monday outside of the Cambodian Embassy in Bangkok. In the days following the disappearance, others plastered posters of Wanchalearm's face, as well as the names and faces of other disappeared activists, throughout the city. Those posters were taken down shortly after.

On Friday, June 5, the Student Union of Thailand also hosted a demonstration in the city, calling for justice for Wanchalearm and other victims of enforced disappearance. Protesters read out the names of several suspected victims, including Siam Theerawut, a self-exiled government critic who went missing in January 2019 after reportedly being extradited from Vietnam, and Surachai Danwattananusorn, who, along with his two aides, disappeared in Laos in December 2018. The bodies of his two aides were found a few weeks later, but Surachai's remains were never recovered.

"This government's commitment to stamping out criticism is an illiberal dead end, and what underlines most just how much of a dead end it is, is the fact that more and more Thais are deeply dissatisfied with certain elements of the longstanding order in Thailand," said Montesano.

The disappearance was also one of the few to have evidence supporting it, according to Ekachai Hongkangwan, a pro-democracy activist who himself has faced judicial harassment and violent attacks for his criticism of Thailand's military government.

Whereas other dissidents previously disappeared without a trace, activists and rights groups now have grounds to challenge the disappearance and call for accountability, as they have footage of the event itself and witness testimonies at hand, he said.

Both governments have so far denied any knowledge of the disappearance, while Prayut said last week that he did not know who Wanchalearm was or why he fled to Cambodia.

On June 9, Cambodian authorities said that they would launch an investigation. However, no details of the probe have been revealed.

"I don't believe Cambodian police can find him," said Ekachai.

"Those abductions sent a very strong signal of just how intolerant the government is, but there's been a sense of resignation that getting to the bottom of what happened is going to be very difficult," said Montesano.

China's funding of the redevelopment of a Cambodian naval base is raising concerns about its military footprint in the South China Sea. But analysts say the project remains small.

In 2020, Thai youth sparked the largest wave of anti-government protests since the 2014 military coup. But human rights activists say persecutions and systematic harassment have weakened the pro-democracy movement.