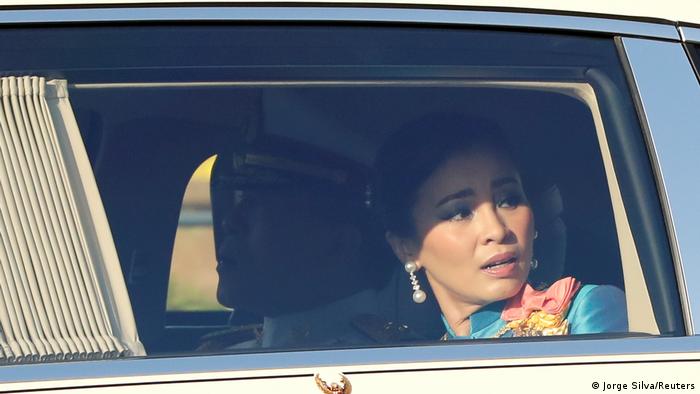 Thai police on Friday said that two men would be charged with attempted violence against the queen, after thousands of pro-democracy protesters  defied an emergency decree to protest against the government in Bangkok.

Activists Ekachai Hongkangwan and Paothong Bunkueanum were arrested Friday under a law that has not been used for decades and punishes any "act of violence against the queen or her liberty."

The two activists could face anywhere from 16 years to life imprisonment. The charge carries a possible death sentence.

Many protesters have already been leveled with lesser charges including sedition and breaking coronavirus rules on gatherings. 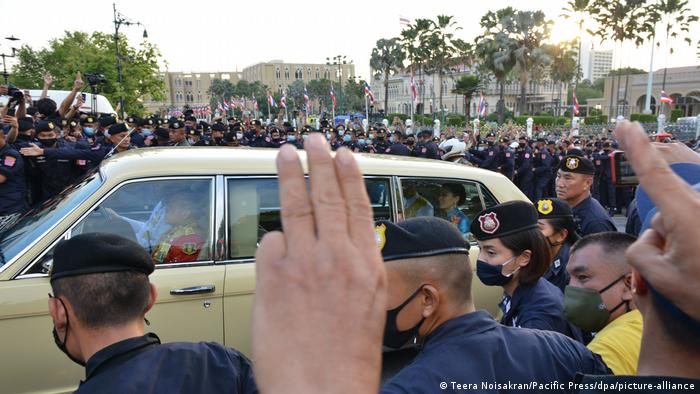 Shielded by security personnel, witnesses reported no violence against the royal convoy

Thousands of protesters are calling for the resignation of Prime Minister Prayuth Chan-ocha's government. Demonstrators are also demanding a new constitution and reforms to the monarchy.

Queen Suthida's convoy was passing a group of protesters on Wednesday, during Bangkok's third major rally, when her motorcade was interrupted.

A video that circulated widely on social media showed members of a crowd heckling Queen Suthida and Prince Dipangkorn's royal motorcade as it slowly passed.

Footage showed activists giving the three-finger salutes of opposition to the establishment and shouted "our taxes" – a reference to widespread discontent about the royal family's lavish spending.

Security guards stood between the royal vehicles and the crowd, but there was no visible violence and none was described by witnesses.

"We were not notified by the police of the upcoming royal motorcade in which we had no way of knowing because they were not informing us," Bunkueanun, also a university student, told reporters on Friday.

"Once we knew that there was a motorcade of the queen and the heir presumptive to the throne I tried to break away from the line and use my megaphone to have everyone move away from the police barriers so the motorcade can pass through easily," he said.

During a Friday morning Facebook broadcast, Bunkueanun said he was surrendering himself to police."I am accused of trying to harm the queen," he said. "I am innocent. That was not my intention."

He told reporters that he had also been charged, after he was transported from Bangkok to a border patrol police base outside of the province.

A police officer said Hongkangwan would also be charged at the same police base.

The veteran activist, who is critical of Thailand's military, has been physically attacked a number of times.

The Thai government cited the incident around the queen's convoy as a justification for imposing emergency measures on Thursday that include a ban on political gatherings of five or more people.

Prayuth's government said the state of emergency was necessary because "certain groups of perpetrators intended to instigate an untoward incident and movement in the Bangkok area by way of various methods and via different channels, including causing obstruction to the royal motorcade.

"Prayuth announced on Friday that his administration hopes it could drop the state of emergency ahead of its normal 30-day duration "if the situation improves quickly.''