Thai police have confirmed that they were warned by Russian intelligence about possible "IS" attacks on tourists. Thailand has increased security around popular tourist spots as its holiday high season begins. 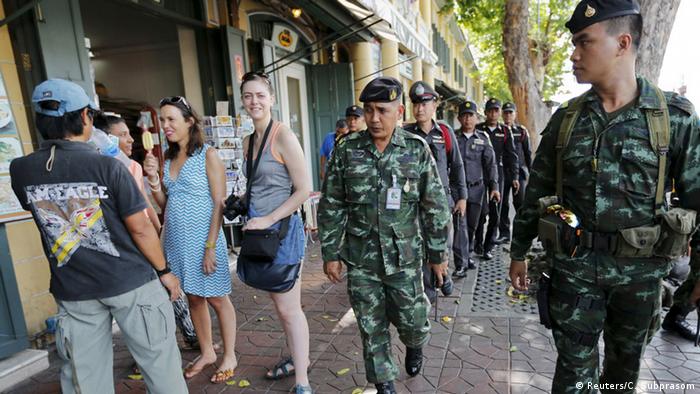 The authenticity of a leaked police memo containing a Russian intelligence warning was confirmed by Thai officials on Friday. The memo states that ten Syrians linked to the terrorist group "Islamic State" (IS) entered Thailand in October with the goal of attacking Russian interests.

National police deputy spokesman Col. Songpol Wattanachai confirmed the authenticity of the document while telling reporters that the details of the intelligence have not been verified.

Deputy police spokesman, Krissana Phattanacharoen, confirmed "the content of (the) letter is genuine", but down played the danger posed to a specific country. "Yes it's a threat, not only to my country but also to other countries as well," he said.

The police memo, which was dated November 17 and marked as "urgent" and "confidential," cites a warning from Russia's Federal Security Service (FSB) which said: "They (the Syrians) travelled separately. Four went to Pattaya, two to Phuket, two to Bangkok and the other two to (an) unknown location."

"The objectives of these people are to cause harm to Russia's assets or those of its allies in Thailand," said the memo. Special Branch police within the document also urged for stronger security around areas which are popular for vacationers from IS opponent countries, specifically: the United States, Britain, France, Germany, Sweden and Australia.

Thai officials also announced on Friday that they have heightened security at all popular tourist spots, but especially the island of Phuket. More than 1.6 million Russian tourists visited Thailand in 2014. The vacation high-season in Thailand has just begun, with numbers expected to spike during Christmas and New Year.

"We have increased the number of officers at our patrols in tourist areas and will follow up on every lead," officer-in-charge Kem Junmookda told the German news agency DPA. "There is no reason to panic. Increased security measures have already been in place since the bomb attack in Bangkok in August," he said.

A bomb at a shrine in Bangkok killed 20 people in August, with the attack being linked to militants from China's Muslim Uighur minority. There has been little sign of IS activity in Thailand until now, but experts believe that IS cells in other Southeast Asian countries are becoming more serious and established.

Starting in September, Russia launched air strikes against IS in Syria. One month later, a Russian passenger plane was downed after a bomb explosion in Egypt killing 224 people, who were mainly Russian vacationers.

Is tourism in crisis?

The terrorist attacks in Paris and the Sinai airplane crash affect everyone - tourism as well. Do vacationers feel insecure? Here's an appraisal. (26.11.2015)