A military court in Thailand has charged two men accused of carrying out a bomb attack at a Bangkok shrine that killed 20 and injured 120 more. Officials describe them as Uighurs from China's Xinjiang region. 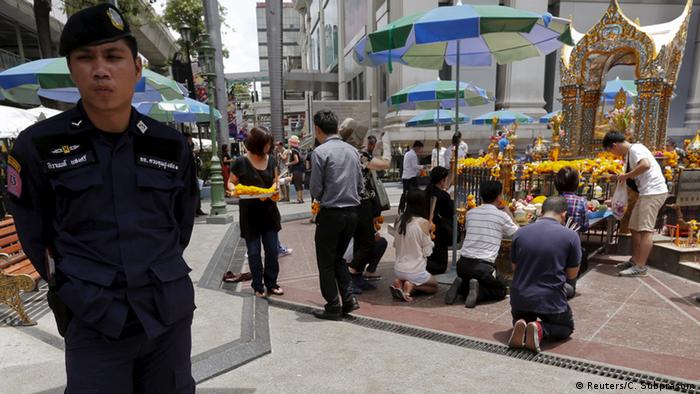 The court indicted the two suspects, identified as Adem Karadag - who has also been named as Bilal Muhammed - and Yusufu Mieraili, on 10 counts connected with the bombing attack, including premeditated murder, Thai media said on Tuesday.

The charge of terrorism was among those laid, with authorities seemingly afraid to use the term for fear of hurting Thailand's vital tourist industry.

The case is being heard at a military court, as the army has handled all cases of "national security" since last May, when it seized power in a military coup that deposed the former elected government.

The bomb attack on August 17 at the popular Erawan Shrine in Bangkok was one of the bloodiest acts of violence in the Thai capital for decades.

Thai officials say that the attack was carried out by a people-smuggling network in retaliation for an official crackdown on its trafficking of Uighurs. The network allegedly used Thailand as point of transit between China and Turkey for Muslim Uighurs who say they are escaping repression, often religious, by the Chinese Han majority.

In July, Thai authorities deported nearly 100 Uighurs, who speak the Turkic language, back to China at the behest of Beijing.

Karadag, 28, told his lawyer in September that he was an ethnic Uighur from western China, while Mieraili, 25, was carrying a passport identifying him as coming from the Xinjiang region of China, which has a majority Uighur population.

Neither defendant entered a plea during the hearing, according to media reports. The lawyer for the two suspects said the indictments were made before they arrived.

Police have said that they believe that the planner behind the attack has fled Thailand and Thai police believe Bangkok bombing suspect is in Turkeyis still at large.#

According to a police spokesman, a man in Thai custody has admitted to carrying out a deadly bomb attack last month. However, the man's lawyer says his client was not even in the country at the time. (25.09.2015)