The Tesla founder spent much of the week in Germany, hobnobbing with politicians and visiting sites of commercial interest. Between his ventures in mobility and vaccines, his stake in the country appears to be growing. 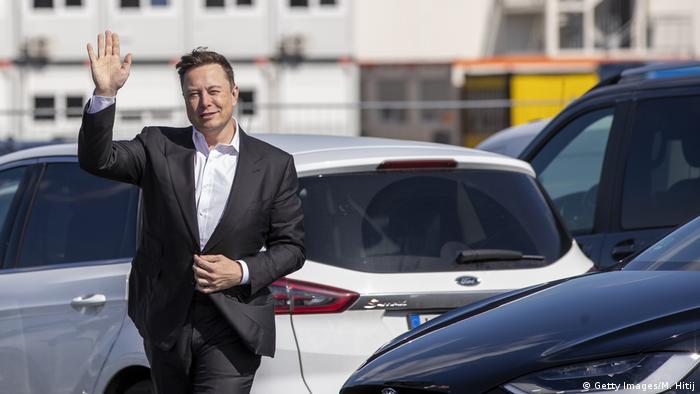 Elon Musk fans were starting to get nervous. The Tesla founder is an avid Twitter user, but after almost three days in Germany, during which he was received like a rock star, he still hadn't tweeted. What was going on?

Only when the trip was over did some tweets arrive. "Great trip to Germany," wrote Musk, followed by one with a few words in German and a photo showing him in old-fashioned carpenter's clothing on the construction site of the Tesla factory near Berlin.

Musk had already announced the reason for his visit to Germany at the weekend, via Twitter: a visit to the new building called "Gigafactory" and also a "side project" at the mechanical engineering firm Grohmann, which Tesla took over in 2017.

Tesla Grohmann Automation, as the company is now called, is working with the Tübingen biotech company CureVac on a project that could play a major role in the development of a vaccine for COVID-19.

Goal is to print drugs

CureVac is considered a beacon of hope in vaccine development. Allegedly, the US government wanted to buy CureVac, which in turn led the German government to invest via the state-owned owned KfW bank.

The collaboration between CureVac and Grohmann dates back to 2015, two years before Tesla joined the company. The goal: to develop an RNA printer that works like a mini-factory and can produce such drugs automatically.

There is now a prototype, and that was the reason why Musk started his trip to Germany on Tuesday with a visit to Tübingen.

"It was about how we can get the RNA printer ready for series production together with Tesla Grohmann," CureVac spokesman Thorsten Schüller told DW.

The system is roughly the size of a small car and is therefore mobile. "The idea behind this is that you can use it to produce drugs based on RNA flexibly and locally, for example in regions where there is an outbreak of infection."

Tests under real conditions are planned for the coming year, says Schüller. When it will be ready for series production is still uncertain.

Being able to produce medicine quickly, cheaply and exactly where it is needed — that is an idea with enormous potential. No wonder, then that speculation began immediately as to whether Musk wanted to buy a stake in CureVac.

CureVac's main owner Dietmar Hopp, who did not meet with Musk, fought back. Such considerations are "pure fantasy," CureVac "is and will remain" a German company he told the Münchner Merkur newspaper. 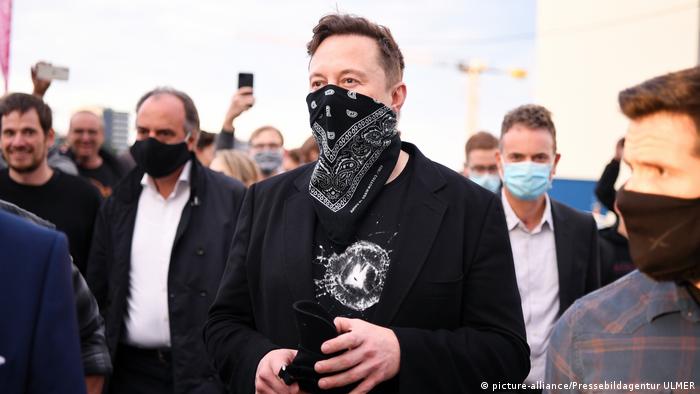 Elon Musk during his visit to CureVac

The billionaire Hopp, who is a co-founder of the software company SAP, owns 49.5% of CureVac. The German state has a 17% stake through KfW Bank, and the British pharmaceutical company GlaxoSmithKline holds a further 8.5%. In mid-August, CureVac went public on the New York Nasdaq exchange.

CureVac spokesman Schüller said that Musk's potential buying of shares was not an issue during the visit. Tesla Grohmann and the parent company did not respond to a DW request for comment.

Wednesday: Meeting with ministers in Berlin

On Wednesday, Musk raved about the "revolutionary technology" of mobile drug production in Berlin during a conversation with Economy Minister Peter Altmaier.

They also of course talked about the Tesla plant in Grünheide. Here, around 40 kilometers (24.8 miles) east of Berlin, Tesla has been building a factory since the beginning of the year, in which up to 12,000 people a year will produce up to 500,000 Tesla vehicles.

It is not known if Musk also spoke to Altmaier about possible state funding for the plant. The federal government wants to promote the battery industry in the country with around €3 billion ($3.56 billion) of aid. However, it is unclear if batteries will be produced at the plant.

The factory is to open in summer 2021. Musk is sticking to this goal despite the pandemic, announced the regional government of Brandenburg after a meeting between the entrepreneur and State Premier Dietmar Woidke.

"There is still a lot of work ahead of us," said Woidke, adding that the planned car factory already has a "pull effect." The nonparty mayor of Grünheide even compares the factory with a lottery win.

However, because not all environmental approvals have yet been obtained, Tesla is building with preliminary approvals at its own risk.

This is another reason for regular protests. Many fear negative consequences for the environment. "No industry in the water protection area" and "Stop the overexploitation of nature and groundwater immediately!" was written on protest banners near the site.

The deadline for citizens' objections ended at midnight on Thursday. The arguments will then be discussed in the local town hall on September 23. 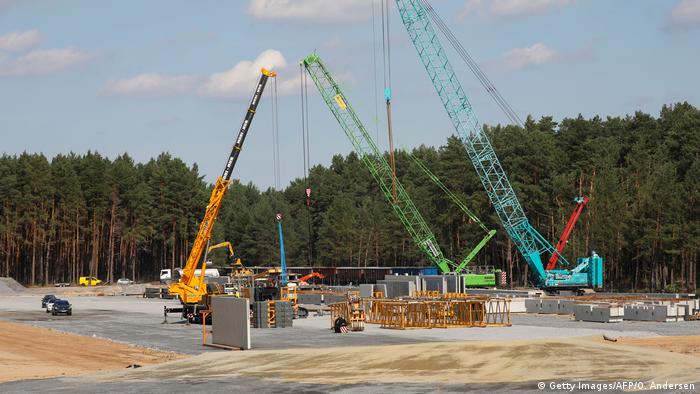 During his visit to Grünheide on Thursday, Musk praised the rapid pace of the work. "You can see how fast the progress is," he said. This is possible through the use of high-quality prefabricated buildings. Tesla wants to "create a great place to work" and "build cool cars."

Musk brushed off critical questions about the factory's high water consumption: "These trees would not grow if there was no water," he said. After all, compared to California, Brandenburg is not exactly a dry area.

On Thursday afternoon, Musk finally found time to tweet, but not about his visit to Grünheide. Instead, he retweeted messages from his rocket company SpaceX to his almost 40 million followers, without any reference to Germany.

Only shortly after midnight did the above-mentioned tweets come. Altmaier, a frequent tweeter by German politician standards, was even more cautious. Neither he nor his ministry mentioned the meeting with Musk on the social media platform. Research Minister Anja Karliczek, who is barely active on Twitter, also remained silent after her meeting with Musk.

Only Health Minister Jens Spahn took the chance to benefit from Musk's reflected glow to announce that he had discussed the big issues with the entrepreneur.

This article was adapted from German by Arthur Sullivan

Tesla to hire up to 10,500 workers for German factory

Elon Musk's firm plans to have three shifts a day, each with 3,000 to 3,500 workers, industry insiders have said. The staff count is lower than promised when the firm applied for a permit to build in a protected area.

German vaccine regulators have confirmed that biotech firm CureVac will begin trialing a coronavirus vaccine on humans. The vaccine could be on the market by mid-2021.

Tesla Germany must stop referring to its vehicles in adverts as potentially autonomous, a court has ruled. Buyers might be misled into thinking that completely self-driving cars were now legal on German roads, it said.