Syrian refugees in Lebanon more scared of starvation than COVID-19 | Middle East | News and analysis of events in the Arab world | DW | 06.05.2020 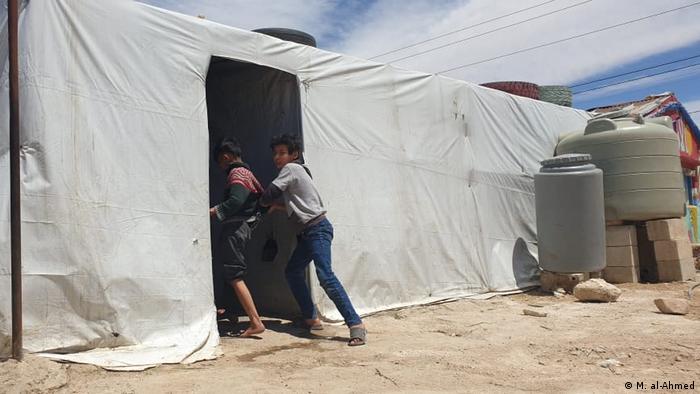 Approaching Lebanon's Beqaa Valley, one sees hundreds of Syrian refugee camps. There, improvised shelters, often covered with plastic tarps, are perched between fields and bushes. That is also the case in Bar Elias, where the never-ending civil war in neighboring Syria is not as distant as elsewhere — Bar Elias is just 15 km (9.3 mi) from the Syrian border.

Bar Elias is also the home of the Medyen refugee camp. Named after its founder, Medyen al-Ahmed, the unofficial camp has been operating in Bar Elias since 2013. Currently, nine families occupy eight tents in the camp. They all come from Al-Qusayr, a western Syrian city belonging to the Homs Governorate.

The families all live in shelters built right on the ground. That means they live in a muddy swamp that is impossible to heat in the winter and one that is unbearably hard and hot in the summer. "Nine of us live in this tent," says Medyan al-Ahmed. Beyond looking after his own wife and children, al-Ahmed has also had to take care of his sister and her children since her husband was killed in the war.

Read more: Coronavirus in the Middle East: 'I want my life back' 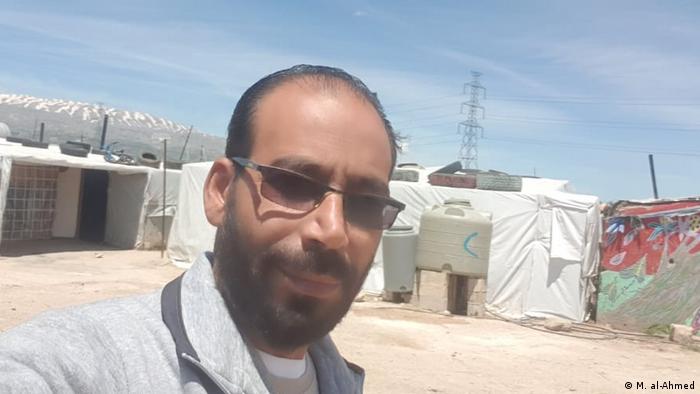 In 2013, Medyen al-Ahmed founded the small camp for his and other families in Bar Elias, Lebanon, just 15 kilometers from the Syrian border

Speaking by telephone, Medyen says of course he and the others have obeyed all of the curfew and lockdown rules put in place by the Lebanese government in an attempt to stop the spread of the coronavirus, but he says it is impossible to observe social distancing in a tent.

Syrians are used to having limited mobility in Lebanon, where refugees were often subjected to arbitrary curfews long before the coronavirus pandemic hit. But when the coronavirus pandemic began in mid-March, the Lebanese government announced further limits in which only one person would be allowed to conduct all of a given camp's shopping. In Bar Elias the job fell to Medyen. Maybe that is why he sounds so exhausted on the phone.

"Life wasn't easy before," he says, "but now I have lost my jobs, too, and everything is four times as expensive." The normally relaxed 43-year-old sounds unusually distraught.

No more school, no more work

Medyen was a merchant in Syria, but then the war came and took everything. When he first arrived in Lebanon he was only concerned with one thing: The well-being of the children. He soon began participating in workshops put on by organizations aiding Syrian refugees, and then he began working for those same organizations. Eventually, with financial assistance from a small German organization called Shams (sun), Medyen started a school in the camp. Originally based in a tent, the school has now moved into a real two-storey building outside the camp, and the state of Lebanon has even said it will recognize diplomas earned there.

"We have had to stop teaching because of the coronavirus," says Medyen. He says that has been disastrous for the children, many of whom can barely read or write as a result of war and displacement. In any case, many of the contracts that Medyen al-Ahmed has with aid organizations have been suspended indefinitely. "We are getting training via WhatsApp and Zoom," he tells me, but says he does not have a paying job at the moment.

Lebanon's already catastrophic economic situation has only been made worse by nationwide coronavirus lockdowns. The country is broke, and its currency, the Lebanese pound, has been in free fall for months.

Most Syrians in Lebanon work as day laborers in the construction, agricultural or janitorial sectors, where most work has been put on hold as a result of the pandemic.

Beyond the coronavirus, the situation for foreign workers in Lebanon — including Syrian and Palestinian refugees — was made even more difficult last summer, when the government passed a new law requiring laborers to provide documentation of job guarantees from employers before they could legally work. Already hard to get before, such pledges have become impossible to obtain during the coronavirus pandemic.

Basmeh & Zeitooneh is a non-governmental organization (NGO) working on a number of refugee projects in the Beqaa Valley. Representatives from the group say they are familiar with the problems Syrians face here. Mohamed Taleb, who runs the organization's community center, says: "Many Syrians are suffering from stigmatization, because most Lebanese simply assume Syrians are more likely to have the coronavirus because of a presumed lack of hygiene and the cramped living quarters of the camps."

The Lebanese government has actively contributed to that stigmatization. This past Monday, for instance, Lebanese President Michel Aoun said the crisis had "three faces" in Lebanon. Beyond the coronavirus itself, Aoun pointed to the country's overall economic crisis and the presence of Syrian refugees as reasons contributing to the sorry state of affairs in Lebanon. Tellingly, Aoun did not say a word about corruption — rampant in Lebanon for decades — during his address. 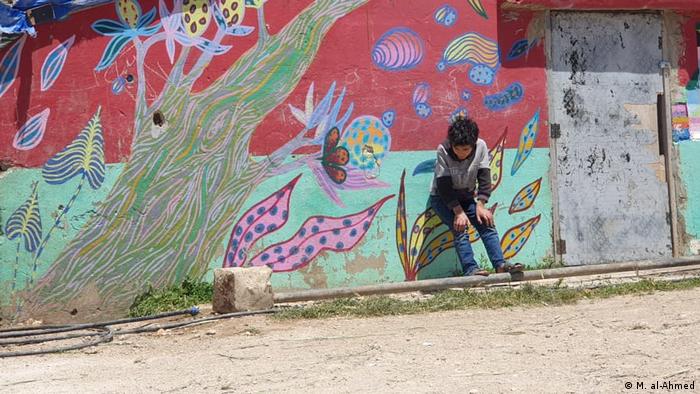 For many Syrian children, the situation is especially difficult — they cannot go to school and have no real options to dream of

No infections in Syrian camps — so far

To date, there have been no coronavirus infections registered in any of Lebanon's Syrian refugee camps, a fact that Medyen al-Ahmed and Mohamed Taleb confirmed. Still, one case of infection was recently registered at a Palestinian refugee camp near the city of Baalbek. According to Johns Hopkins University in the US, a total of 750 coronavirus infections have been registered in Lebanon and 25 people have died of its resulting disease, COVID-19. It must be said, however, that no one has any idea what the actual number of infected in Lebanon is at this point.

"Of course it would be disastrous if cases began to appear in the Syrian refugee camps because everyone in them is connected and they are living in such close proximity to one another," says Mohamed Taleb.

But what would happen if someone in a camp were to recognize COVID-19 symptoms? Some organizations, such as Doctors Without Borders, have set up health centers for Syrians at Lebanese hospitals. But Mohamed Taleb says most Syrians are too scared to go to such centers because they fear they could run into legal trouble if they no longer have valid residency permits or other valuable documents.

Last year, the Lebanese government forcibly deported several hundred Syrians for lacking such documents. Therefore, people think long and hard before seeking a coronavirus test or treatment, for they know there are only two alternatives: health care or possible deportation.

The international NGO Human Rights Watch has raised issues with Lebanon's policies and called on the government to make clear to Syrians in the country that they need not fear legal retribution and will receive medical treatment if they have COVID-19 symptoms. 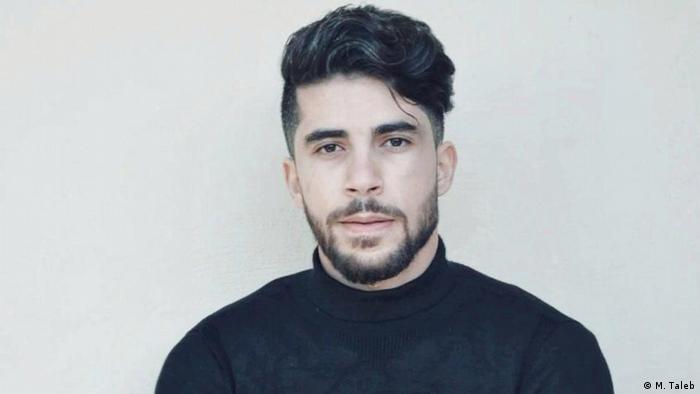 Basmeh & Zeitooneh and other organizations have been handing out hygiene kits in and around Bar Elias as well as informing people about the virus via WhatsApp. They have also devoted a lot of energy to informing refugees how to deal with coronavirus conspiracy theories and related disinformation.

"We received soap, disinfectant and masks, too," says Medyen al-Ahmad. He says he and his wife have taught their children how to protect themselves and that others in the camp are well aware of ways to minimize the risk of infection. "I am most worried about the health of the children," Medyen's wife Umn Khaled says on the telephone. She is a humble and friendly woman who tells me, "We will just have to trust in God beyond that." 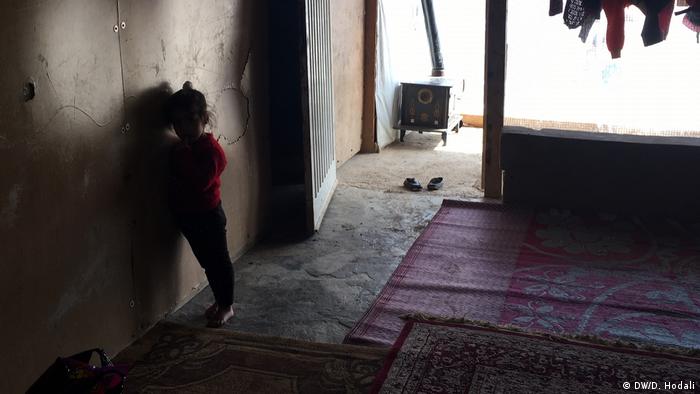 The interior of Medyen al-Ahmed and his family's tent, seen in 2018

Medyen says most of the larger camps in Lebanon receive financial assistance but the smaller ones often fall through the cracks. He sounds concerned, then he says, "I don't know how life will change after the coronavirus."

Meanwhile, Lebanon has loosened some of its restrictions. For instance, curfews are only in place from 9 p.m. until 5 a.m., and cafes and restaurants can now open — though they can only seat one-third of their capacity at any given time. Medyen says a certain level of normalcy has also returned to the camps, but he adds: "People can't put up with this situation much longer. They have no money and they are finding it difficult to just do nothing all day. Meanwhile, they are more scared of starvation than they are of the coronavirus."