Rebels refute a Russian claim that Jaysh al-Islam, or Army of Islam, will leave Douma in eastern Ghouta. The retaking of Douma would remove the final rebel stronghold in Damascus. 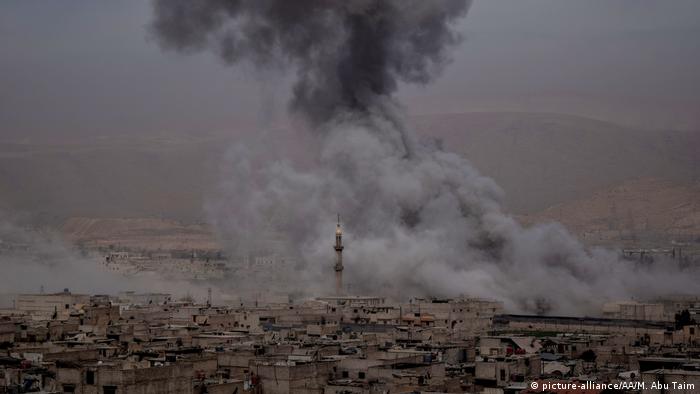 The last armed rebel group in the main town of Douma in Syria's eastern Ghouta outside of Damascus has denied the Russian Defense Ministry's claim it had made a deal that would see them follow the footsteps of other rebels and leave the area.

"Today an agreement has been reached with the leaders of illegal armed formations of fighters and their family members to leave the town of Douma shortly," said Sergei Rudskoi, a senior Defense Ministry official, at a briefing quoted on the ministry's website. Syrian state television broadcast a similar report.

The announcement came after the Syrian government, which is backed by the Russian military, on Wednesday issued a three-day ultimatum to the Jaysh al-Islam, or Army of Islam, group to leave Douma or face an all-out offensive.

But Jaysh al-Islam said no deal had been made.

"Our position is still clear and firm and it is rejecting forced displacement and demographic change in what remains of eastern Ghouta," Jaysh al-Islam military spokesman Hamza Birqdar said in a message posted on his Telegram feed.

Taking back Douma would be a major victory for Syrian President Bashar al-Assad and would remove the final rebel stronghold near Damascus after seven years of conflict.

Douma is surrounded by Syrian government forces and there are tens of thousands of civilians in the town.

Rudskoi said so far "28,495 peaceful civilians have left via a humanitarian corridor opened in the area of the Al-Wafideen settlement."

Syrian troops and their allies launched an all-out assault on eastern Ghouta on February 18, seeking to remove the armed opposition from its strategic perch on the edge of the capital.

The government offensive in eastern Ghouta has resulted in the death of more than 1,600 civilians, according to the Syrian Observatory for Human Rights.