The evacuations are part of a deal between Russia and the Faylaq al-Rahman rebel group. The Syrian government now controls a vast majority of the besieged enclave outside the capital, Damascus. 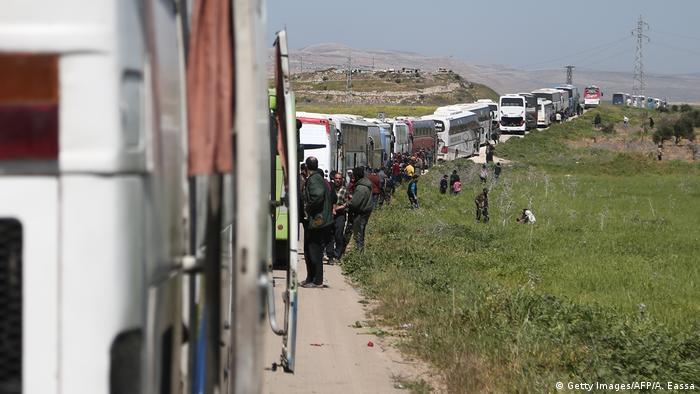 A quarter of those evacuated overnight were rebel fighters, the SANA state news agency said. The evacuees will be driven to rebel-held territory in northwestern Idlib province.

The evacuation — the biggest yet out of the devastated enclave outside capital Damascus — is part of a deal reached last week between the Faylaq al-Rahman rebel faction and Russia, which backs the Syrian government.

Syrian government forces and allied militia have recaptured about 80 percent of the former rebel bastion since they launched a brutal offensive last month that has left hundreds of people dead and rendered many more homeless.

The town of Douma now remains the last rebel-held stronghold in the besieged enclave. The Russian military said on Monday it was close to reaching a deal with the Jaysh al-Islam, or Army of Islam, rebel group to arrange its exit.

The town is the home to tens of thousands of people, including many who were displaced over the past weeks of heavy fighting.

Lieutenant General Stanislav Gadzhimagomedov told Russian news agencies on Monday in Syria that he expects Russian troops to "take them (rebels) out soon," and that the rebels were reportedly willing to lay down arms.

However, the Syrian Observatory for Human Rights said the rebels were divided on a deal with Moscow. Some hard-liners are even against holding talks with Russians, it said.

Another deal reached last week saw thousands of Ahrar al-Sham rebel fighters and civilians leave the battered town of Harasta in the west of the enclave.

Separately, Army of Islam spokesman Hamza Bayraqdar has accused the Faylaq al-Rahman rebels of helping government forces make inroads in the enclave after they dried out artificial swamps set up by the rebel fighters to slow down the Syrian forces' advance.

"We had defensive plans prepared, but regrettably Faylaq al-Rahman cut the water that was brought from Barada River," Bayraqdar told the Dubai-based Al-Arabiya TV. "This sped up the regime's advance."

Washington and Moscow criticize each other for the failure of a truce near Syria's capital, Damascus. Residents remain trapped in the rebel-held enclave of eastern Ghouta, while humanitarian convoys remain on standby. (01.03.2018)

In the Middle East, culture around recreational drugs is changing 05.02.2022

Smoking cannabis on social media and sharing jokes about getting stoned are leading to more openness about recreational drug use in a region where intoxication of any kind is usually frowned upon.