"If Crisis or War Comes" advises Swedes on rationing, propaganda and clean water. Although Sweden has not fought in a military conflict for 200 years, it has been increasingly concerned about Russian aggression. 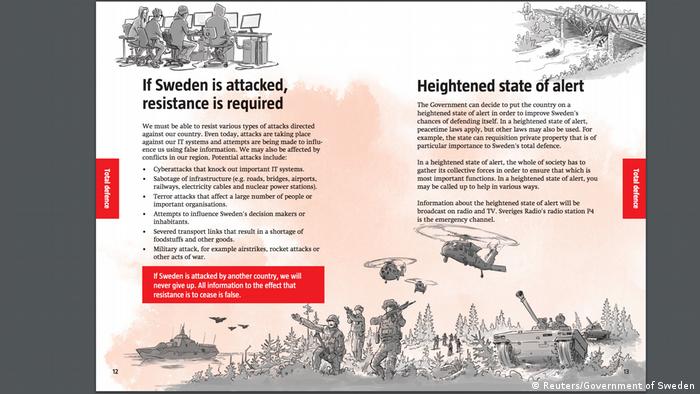 The government of Sweden announced plans on Monday to issue a pamphlet to all citizens with instructions on how to handle a potential military conflict as Russia stepped up its assertive behavior on the Baltic Sea.

Titled "If Crisis or Was Comes," the 20-page booklet details how to find a bomb shelter, find clean drinking water, stock emergency rations and distinguish propaganda from factual news. The instructions mark the first public awareness campaign of its ilk launched by Stockholm since the end of the Cold War.

Dan Eliasson, head of the Swedish Civil Contingencies Agency, told reporters that "even if Sweden is safer than most countries, threats do exist."

"It's important that everyone has knowledge of what can threaten us so we can prepare in case something serious occurs."

Since the annexation of Crimea in 2014, Sweden has accused Russia of repeatedly violating its airspace. At one point, Swedish authorities were also alarmed by the sight of an unidentified submarine in the Stockholm archiapelago.

The Kremlin has insisted that the West is stoking "Russophobia" with their claims of Russian aggression, such as last week when Poland broke up a cell it accused of perpetrating "hybrid warfare" within its borders.

Sweden has not been at war since its conflict with Norway in 1814. In 2016, the government announced that it was increasing military spending after years of declines.

The brochure will be delivered to 4.8 million Swedish households in the coming weeks.

German Chancellor Angela Merkel is set to discuss the Iran nuclear accord, as well as the wars in Syria and Ukraine with Russia's Vladimir Putin. Merkel is one of the few leaders Putin "takes seriously" analysts told DW. (18.05.2018)

Through a myriad of political and religious connections, Russia is seeking to establish its presence in Lebanon. In the first of a three-part exclusive for DW, Benas Gerdizunas traces Russia's influence. (20.05.2018)

Swedish Defense Minister Peter Hultqvist said Sweden will provide troops only if both Russia and the West agree. Western officials are considering deploying a force led by non-NATO nations in eastern Ukraine. (17.02.2018)