More than 100 threatening emails have been sent to politicians, journalists, public figures and institutions across Germany in recent weeks. Investigators see a link between the emails, signed using neo-Nazi terminology. 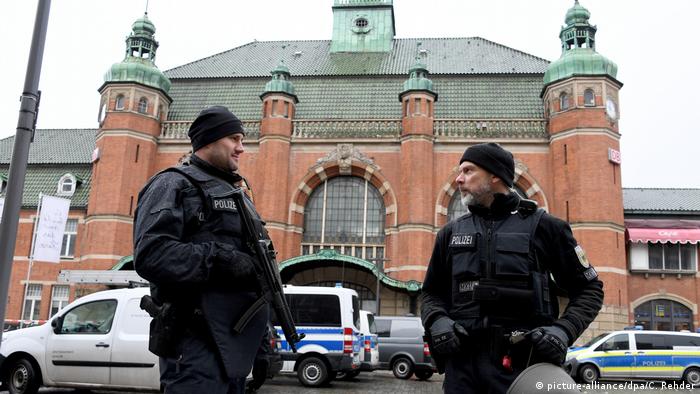 A suspected neo-Nazi extremist or extremists are responsible for a series of bomb threats across Germany in recent weeks, according to media reports.

More than 100 threatening emails signed off with "National Socialist Offensive," "NSU 2.0" — short for National Socialist Underground — or "Wehrmacht" have been sent to prominent politicians and state institutions since the end of 2018, the Süddeutsche Zeitung and public broadcaster NDR reported late Wednesday.

Among the bomb threats were two made earlier this week against the train station in the northern city of Lübeck and the finance office in the western city of Gelsenkirchen. The threats forced the evacuation of the buildings, but no bombs were found.

Investigators believe there may be a link between the anonymous threatening emails, based on similarities in writing style and the targets. It remains unclear if the threats are being issued by a single individual or a group; the emails have been sent from different accounts.

In one email to socialist Left Party lawmaker Martina Renner, the sender or senders claimed to be behind the bomb threats. The email threatened to bomb banks, railway stations and state institutions throughout Germany.

It also threatened to send letter bombs and to "execute citizens on the streets," mentioning assault rifles, pistols and biological weapons.

Other emails have been sent to politicians, journalists, lawyers, the Central Council of Jews, public institutions and prominent figures. Included in that last group is singer Helene Fischer, who spoke out after far-right riots in Chemnitz last summer.

According to investigators, no actual bombs have been found to date; all threats have "remained virtual."

Last August, Seda Basay-Yildiz — a Frankfurt lawyer of Turkish origin — received a fax claiming to be from NSU 2.0, in which the sender threatened to kill her 2-year-old daughter.

The National Socialist Underground was a group of far-right extremists found guilty of killing eight random Turks in Germany between 2000 and 2007. Basay-Yildiz represented the families of some of the victims.

Some 500 passengers were evacuated from a high-speed train at the Frankfurt South train station after German police received a bomb threat. After searching the ICE train, authorities later gave the all-clear. (25.01.2019)