Spain's Supreme Court has withdrawn its extradition requests for six Catalan separatist politicians, including ex-regional president Carles Puigdemont, who is in Germany. They were wanted on rebellion charges. 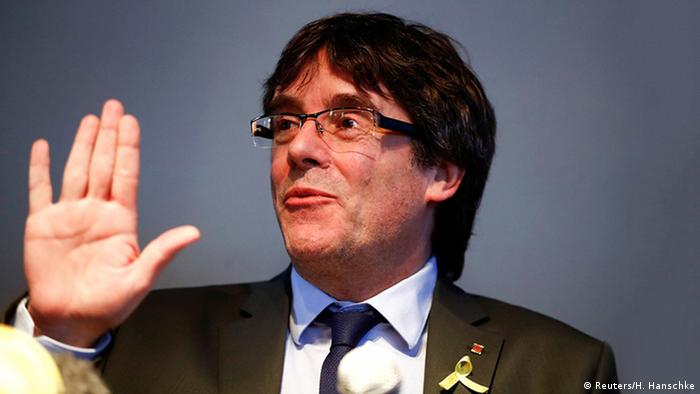 Last week, a German court approved Puigdemont's extradition, but ruled that he couldn't be sent back to Spain on rebellion charges, only for misuse of public funds.

In a decision published Thursday, Spanish Judge Pablo Llarena revoked the arrest warrants against the six Catalan leaders and declined to extradite Puigdemont on charges of misusing public funds. However, Llarena criticized the German court's decision, saying it showed "a lack of commitment" in pursuing the fugitives.

If Puigdemont and the other separatist leaders had been extradited for charges of misusing public funds, they would have only been allowed to be tried in Spain on those charges.

The Spanish judiciary's decision to withdraw the arrest warrants demonstrated the "weakness" of its charges, Puigdemont said.

"Withdrawing the EAW is proof of the immense weakness of the legal case," Puigdemont posted on Twitter. "To revoke pretrial detention would be the signal that the Spanish judiciary is starting to act like the European one."

The former Catalan president's lawyer, Jaume Alonso-Cuevillas, also took to the Twitter, humorously posting: "It looks like we'll get to have a memorable summer and finally plan some holidays."

The lawyer for former Catalan minister Clara Ponsati welcomed the Spanish court's decision, but said it remains unclear whether the Catalan politicians would be allowed to return.

"It's excellent news, with regards to my client Clara Ponsati, and obviously for Puigdemont ... but we tread cautiously," lawyer Aamer Anwar told the Reuters news agency.

Although the international and European arrest warrants have been dropped, the Spanish warrants remain open, meaning they will be detained if they try to re-enter the country.

Spanish authorities ordered Puigdemont's extradition due to his role over last year's unauthorized independence referendum in Catalonia and the regional parliament's subsequent declaration of independence from Spain.

Puigdemont fled to Belgium following the October 1 referendum in order to avoid arrest. He was arrested in Germany on March 25 this year while traveling by car back to Brussels following an event he attended in Finland.

Nine Catalan separatist leaders are currently in custody in Spain and awaiting trial.