The court has said the former Catalan leader can be extradited to Spain for graft and not rebellion. Puigdemont faces charges of rebellion and corruption in connection with Catalonia's failed bid for independence. 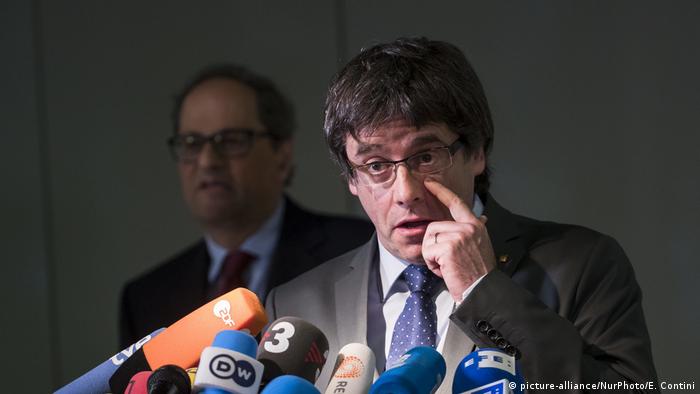 A court in Germany ruled on Thursday that deposed Catalan leader Carles Puigdemont can be extradited to Spain only on the charge of misusing public funds and not on the more serious charge of rebellion.

That would mean if Puigdemont is extradited, he can only stand trial in Spain on corruption charges, said a spokeswoman for the higher court in the northern German state of Schleswig-Holstein. She said the Thursday decision can be appealed.

"We have defeated the main lie upheld by the state [Spain]. German justice denies that the referendum on October 1 was rebellion," Puigdemont said in a Twitter post following the court ruling.

"Every minute spent by our colleagues in prison is a minute of shame and injustice. We will fight to the end, and we will win!" Puigdemont said, referring to other pro-independence Catalan leaders in detention.

Puigdemont went into self-imposed exile in Belgium after Madrid fired him and his government for "illegally" declaring independence for Catalonia. In March, he was detained in Germany on a European arrest warrant while traveling through the country.

"The court decided this morning that an extradition due to the accusation of misuse of public funds is permissible," said the spokeswoman.

The extradition order will soon be approved by the attorney general of Schleswig-Holstein, as is required, Germany's DPA news agency reported, citing a spokesperson.

Puigdemont has been out on bail since April, after a court ruled he could not be extradited for rebellion, as that was not actionable under German law. The court argued that the nearest German equivalent, high treason, was not applicable as Puigdemont had not caused or instigated violence.

According to German law, a person can be extradited only if charges against him/her are punishable in Germany.

The verdict is still out on whether Germany will hand ex-Catalan President Carles Puigdemont back to Spain some five months after declaring Catalonia's independence. DW has the lowdown on Catalan secession from Spain. (21.09.2017)

The theatrics continue around the Catalonian ex-president now facing extradition from Germany. The pro-independence leader should return to Spain to face justice like his comrades, writes Bernd Riegert. (03.04.2018)

A dusty German children's song has gained new life after Catalans misheard the lyrics as "Viva Puigdemont" and turned it into a viral sensation. The hashtag #BiBaButzemann now leads to posts from the separatist movement. (17.04.2018)