South Korea, US at odds over deal to end Korean War

Nearly 70 years after the conflict ended in stalemate, Seoul is pushing hard for a declaration that will formally end the Korean War. But Washington is reluctant to reward the regime in Pyongyang. 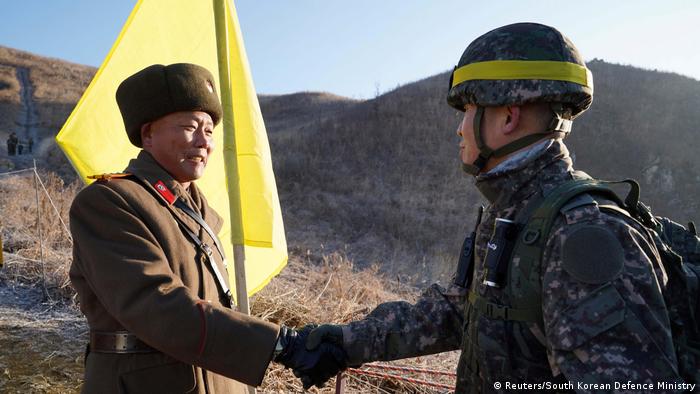 Seoul wants to sign a deal with Pyongyang that will permit South Korean President Moon Jae-in to go down in history books as the leader who ended the war, say experts

The governments of South Korea and the United States have publically reiterated they are making progress in discussions on an agreement that all sides involved in the 1950-53 Korean War can accept and finally formally end the conflict.

Analysts suggest, however, that the show of unity is forced and designed to give the impression that the alliance remains resilient.

They say while Seoul is desperate to sign a landmark agreement with North Korea that will permit President Moon Jae-in to go down in the history books as the leader who ended the war, the administration of President Joe Biden in Washington is far more reluctant to take what would effectively be a step into the unknown and could very easily upset the delicate security balance in Northeast Asia.

Opening the door for 'permanent peace'

Moon said that the "end-of-war declaration will indeed open the door to complete denuclearization and permanent peace on the Korean Peninsula."

Within days, the US indicated that it was applying the brakes to Moon's enthusiasm, with National Security Adviser Jake Sullivan stating in a press conference that, "We may have somewhat different perspectives on the precise sequence or timing of conditions for different steps" for reaching an agreement on a declaration that ends the Korean War.

Yet the discussions continue.

On Tuesday, senior officials from the two governments held talks in Washington on ways to resume dialogue with Pyongyang.

It came a day after officials from South Korea and China spoke via video link about ways to resume the Korean peace process and, ultimately, sign a formal declaration to end a conflict that ended in an armistice and stalemate along what is today the Demilitarized Zone that has divided the Korean peninsula for nearly 70 years.

Analysts believe the US is happy to talk the issue through but is still far from convinced of the wisdom of a move that provides more benefits to Pyongyang and, potentially, China than South Korea or the US.

"Moon has been quite consistent since he came to office," said James Brown, an associate professor of international relations at the Tokyo campus of Temple University. "He has been much more sympathetic to the North and is determined to leave a legacy of achieving the breakthrough in relations with Pyongyang and, ultimately, achieving reunification."

"Biden, on the other hand, is showing much more hesitancy and he seems to be determined not to copy the policies of [Donald] Trump, which ultimately failed. The US president instead prefers to return to the 'strategic patience' of the [Barack] Obama administration," he told DW.

Why does South Korea need a civilian space program?

"Washington looks at a declaration to end the war as a gift to the North, when they have failed to do any of the things towards denuclearization that they promised previously," he said. "In fact, they had done the opposite and have been ratcheting up tensions in recent weeks with repeated missile test launches. Biden does not want to give Kim Jong Un a diplomatic victory without getting something guaranteed in return."

That seems increasingly unlikely as the North is making demands before returning to the negotiating table. It has been reported that Pyongyang is insisting that the US and South Korea halt all joint military exercises and lift all economic sanctions on the North as preconditions.

In an editorial, the Korea Herald newspaper called the demand "absurd" and criticized Moon for an "obsession" with an agreement with the North in the closing days of his presidency. A hurried deal that favors the North "could have grave consequences" for the South, it added.

Rah Jong-yil, a former diplomat and head of the South Korean intelligence department charged with monitoring North Korea, said Seoul and Washington may ultimately want the same thing — peace on the peninsula — but "differ in how they are going to achieve and then continue to manage that."

"I think Moon sees an end-of-war declaration as a starting point that will then open up possibilities for more agreements with the North, on denuclearization, development assistance or in other areas," he said. "But the US is sticking to the need for pre-conditions, primarily advance scrapping of the nuclear warheads, before any agreement to end the war."

As well as being reluctant to give the North an undeserved diplomatic victory, the US is being cagey as it is worried about the security implications, Rah said.

"The US sees ending the war potentially as a trick or a trap," Rah added, a belief that has been enhanced by North Korea indicating that it is at least willing to consider the issue positively.

Brown agrees that while Moon might be driven by a heartfelt desire for peace and unity among the Korean people, the US is looking at the wider strategic realities of the situation.

"And the truth is that right now, tensions are increasing on the peninsula, missiles are being fired and there is a greater risk of another Korean war breaking out than a situation that is conducive to a declaration of the end of the last war," he added.

South Korea appears keen to help its belligerent neighbor — but critics warn that the North has little to offer in return, has no intention of giving up its nuclear stockpile and has a habit of breaking its promises.