Chinese President Xi Jinping has spoken at an anniversary celebration of the Korean War making critical comments seemingly aimed at Washington. He warned other actors against making trouble on "China's doorstep." 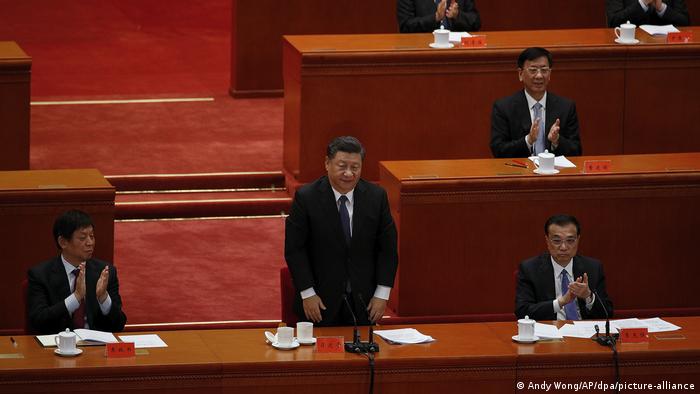 President Xi Jinping made veiled comments that seemed to concern the United States at the 70-year anniversary celebration of the Korean War on Friday, condemning "unilateralism, protectionism and extreme egoism," and warning potential "invaders" of the country's military resolve.

The three-year war that broke out in 1950 was the only time that Chinese and American forces faced each other in battle. China entered the fray to assist communist North Korean forces roughly four months into combat, on October 23, 1950.

While the war ended in a stalemate, cleaving the Korean peninsula in half, for Beijing the war represented a foundational victory for the Communist party against a more advanced enemy.

Resolved to defend the motherland

Without explicitly mentioning the US, Xi warned the country's main rival against acts of aggression.

"Chinese people don't create troubles, nor are we afraid of them," Xi told party leaders, veterans and families of those who served in the so-called Chinese People's Volunteers forces.

"We will never sit back and watch any damage to our national sovereignty... and we will never allow any force to invade or divide the sacred territory of the motherland," he said in a reference to the disputed island of Taiwan, among other territories claimed by China.

"When China was very poor, it didn't surrender to US pressure," an editorial in the Global Times tabloid, which is closely aligned with the Communist Party in China, had said earlier in the week. "Today, China has grown to be a strong country, so there is no reason for China to fear the US threats and suppression."

Tensions between Beijing and Washington have been steadily increasing in recent years with the two coming head to head over issues of trade, technology, human rights in Xinjiang and Hong Kong, and the status of Taiwan.

On Wednesday the Pentagon announced that it had agreed to sell over one billion dollar's worth of missiles to the Taiwanese government.

Xi said that China was ready to fight anyone "creating trouble... on China's doorstep." 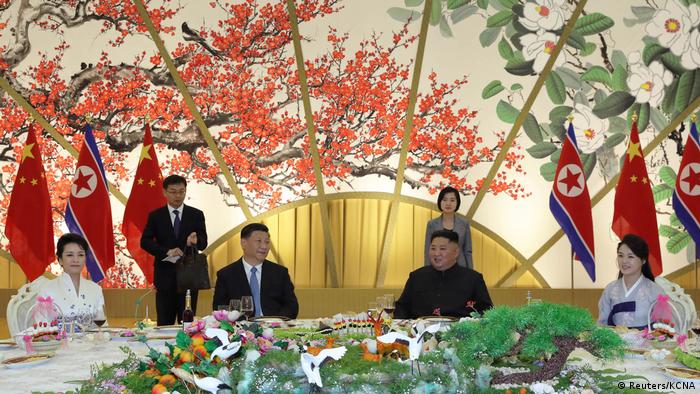 Xi Jinping and Kim Jong Un have held several meetings in recent years, including this one in 2019 at a banquet in Pyongyang

North Korean state media reported on Thursday that Kim had visited a cemetery for Chinese soldiers. The authoritarian leader said that "every part of our country is closely associated with the red blood shed by the service personnel of the Chinese People's Volunteers'' and that his government would never forget "their noble soul and lofty self-sacrificing spirit.''

Taiwan is a democracy with a strong human rights record and a high standard of living. But despite the country’s economic strength and elected government, the island state struggles to receive international recognition.

Beijing's military threats against Taiwan after Nancy Pelosi's visit are unprecedented. For the time being, however, not much will likely change as neither country can do without the other as a trading partner.