South China Sea: France and Britain join the US to oppose China

France and Britain have conducted naval operations in the South China Sea to put pressure on Beijing's increased militarization of the disputed islands. Chinese authorities maintain they will not give up any territory. 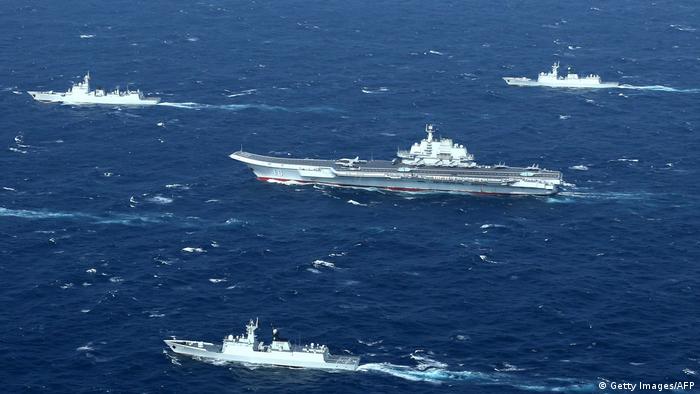 US Secretary of Defense James Mattis is in China this week for the first time and at the top of the agenda between the two nations is China's continued expansion of military installations in the South China Sea (SCS).

After Mattis met with Chinese President Xi Jinping on Wednesday, China's state broadcaster CCTV reported that Xi told Mattis China would not "lose one inch" of territory "left behind by our ancestors."

China frequently refers to islands in the SCS as part of its historical territory, although they are claimed by six other nations.

"Regarding China's sovereignty and territorial integrity, our attitude is firm and clear," said Xi.

In early June at the Shangri-La Dialogue, a regional security conference in Singapore, Mattis told the audience that there would be "much larger consequences" in response to China's continued installation of military infrastructure on disputed islands in the SCS.

Joining the revamped US effort to increase pressure on China in the SCS, French Defense Minster Florence Parly said a French maritime task group, together with UK helicopters and ships, would conduct freedom of navigation operations, sailing naval vessels through international waters in the SCS, which China considers as its maritime territory.

Referring to the political differences between France and Britain, Parly said in a speech that when meeting in Asia, the two countries shared deeply significant "vision, strength and values" along with a "willingness to project them."

Parly added that France supported a rules-based international order on the SCS and that freedom of navigation must be upheld.

"France fully supports a code of conduct in the South China Sea, which should be legally binding, comprehensive, effective and consistent with international law," said Parly. "We should be very clear that the fait accompli is not a fait accepted."

By building military installations on islands in the SCS, China claims territorial sovereignty over areas far from the mainland, although this is not officially recognized by any international body. The freedom of navigation operations carried out by the US and other navies are a way to demonstrate the validity of international law.

China remains defiant in claiming international waters and is using its growing navy to enforce its territorial ambition.

Jonas Parello-Plesner, an observer who was aboard a French military vessel during the joint freedom of navigation operation announced at the Singapore conference, gave a first hand account to the Wall Street Journal of the flotilla's encounter with the Chinese navy near the Spratly Islands.

Parello-Plesner reported that a Chinese frigate contacted the French vessel by radio as they passed through Mischief, Subi and Fiery Cross Reefs, where China in recent years has built artificial islands and military installations.

"This is China warship calling. The Nansha islands are under Chinese sovereignty. What are your intentions?" After the French captain replied that they were lawfully sailing through international waters, they were tailed by Chinese naval vessels.

It is estimate that in 2014, China began construction of artificial islands on reefs in the Spratly archipelago. This raised alarm in the US and Asia that China would be able to project its military around the SCS and potentially exert control over waterways that carried an estimated $3.3 trillion, or one-third of global trade, in 2016.

Despite continued international condemnation led by the US, China's militarization of the SCS has continued unabated.

In 2017, satellite images released by the Asia Maritime Transparency Initiative (ATMI), part of the Washington-based think tank, Center for Strategic and International Studies (CSIS), showed the extent of China's military build up on the Spratly Islands and the Paracel Islands further north. According to the ATMI, China has extensive missile systems along with radar jammers on the islands.

The images clearly show completed airstrips and other infrastructure. In April 2018, China conducted its largest-ever naval exercise in the SCS. In May, the Chinese landed a warplane for the first time on an air strip on Woody Island, in the Paracels. 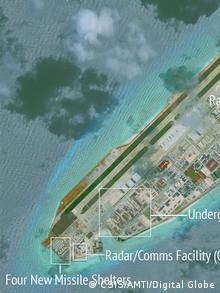 China is building military installations on the Spratly islands

Although China continues to increase its capability, observers do not think that it is too late for international coalitions to maintain the integrity of international waterways passing through the SCS.

"Beijing is certainly winning more peacetime control over activity on and above the South China Sea each day, but it hasn't completed that control yet," Gregory Poling, the director of ATMI told DW, adding that increased engagement of the French and British navies send a strong signal to China.

"They make clear that the SCS is not a Sino-US issue," said Poling. "It's a matter of China vs. an overwhelming international consensus about international law and norms."

As for the "consequences" promised by US Secretary of Defense Mattis, there are limitations to what the US military can do, outside of projecting force. Mattis is in China this week on his first visit since becoming secretary.

In May, the US rescinded China's invitation to participate in Rimpac, an international biennial military exercise in the Pacific Ocean. On Tuesday the US aircraft carrier, USS Ronald Regan, anchored in Manila Bay to begin patrolling the South China Sea. It is the third US aircraft carrier sent this year.

"There are a lot of 'larger consequences' the US could consider, but most of them don't come from the Pentagon," said Poling, adding that while the joint training and deterrence measures were what the US Department of Defense should be doing, political pressure is what's missing.

"Putting additional pressure on Beijing will require high-level focus and a strategy from the White House, which has been sorely lacking," said Poling.

"The UK and France are showing that they care about the international rules that almost the entire world has signed up," Bill Hayton a South China Sea expert at the UK-based think tank Chatham House, told DW.

"The right of all ships to sail wherever they want in the sea on the basis of innocent passage has been a fundamental international principle for decades but it looks as if China is attempting to unilaterally limit it," said Hayton. "The recent voyages by French and British warships are a way of resisting that limitation."

"The SCS needs to be put back at the top of the diplomatic agenda to isolate Beijing," said Poling from CSIS.

It seems the UK and France have realized that the only way to salvage UN Convention on Laws of the Sea (UNCLOS) and the principles on which it and the larger rules-based order are based is to join the effort to convince Beijing to clarify its claims," he added. "The US cannot do it alone, even if it were so inclined."