The Philippine president wanted to build on disputed land at the heart of a lucrative shipping route. Pressure from China made him quickly change tack. 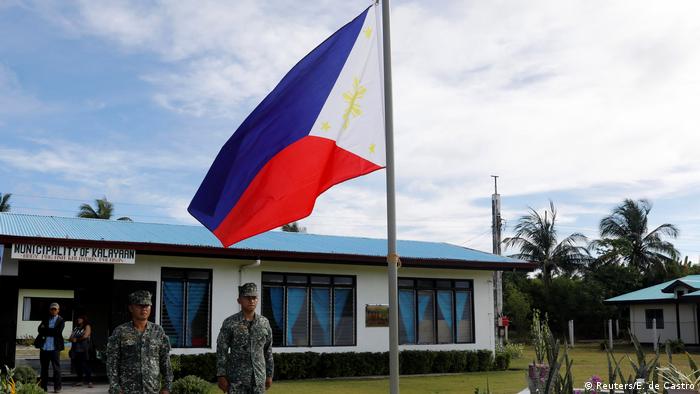 Philippine President Rodrigo Duterte halted construction work near a disputed island in the South China Sea, his defense minister announced on Wednesday, in a bid to weather a potential diplomatic storm with Beijing.

A territorial spat emerged in the Spratly Archipelago in August when Philippine soldiers brought bamboo and roofing materials to a newly formed sandbar — a partially submerged stretch of sand created by waves breaking off a beach — near the Philippine-occupied Thitu Island. Beijing responded by sending ships to the area.

"We tried to put some structures (on) one of the sandbars near our island and the Chinese reacted," Lorenzana said. "And so the president came to know about this and he said: 'Let's pull out.'"

Though the rift remains unresolved, Lorenzana said both sides have pledged not to occupy further territory. Beijing and Manila will now negotiate a military protocol to prevent any maritime "miscalculations" from occurring.

"Anything can happen anytime, so we want commanders on the ground to decide to prevent violence," he said.

China's sweeping territorial claims in the South China Sea are contested by the Philippines and four other Asian nations. The strategic waterway sees about $5 trillion (€4.31 trillion) worth of shipping pass through it every year.

Thitu Island — known locally as Pag-asam, the Tagalog word for 'hope' — is the largest of nine features the Philippines holds in the disputed Spratly Archipelago.

The sandbar on which Philippine soldiers sought to build is a 500-square-meter outcrop located over 4 kilometers (2.5 miles) away from Thitu Island.

In recent years Beijing has turned several reefs in the South China Sea into artificial islands, installing aircraft hangars and missile facilities on waters claimed by its neighbors.

In 2016 the Permanent Court of Arbitration in The Hague invalidated almost all of Beijing's claims in the South China Sea. The United Nations-backed court ruled that the Spratly Archipelago, which makes up the majority of the territory, consists of reefs, not islands, and as a result "cannot generate maritime zones." 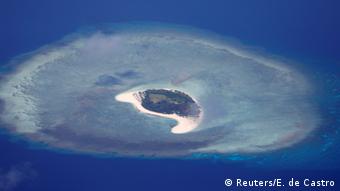 The cost of aid

The UN ruling gave several nations the opportunity to press China on its unlawful territorial claims. But despite being one of China's most vocal critics in maritime disputes, the Philippines chose not to exert diplomatic pressure.

Since his election in May 2016, Duterte has courted Chinese trade and assistance to the tune of billions of dollars, while softening his stance on territorial infringements. His approach has been a source of criticism from nationalist and left-wing groups who demand a harsher stance against China. Tensions between Manila and Beijing have eased considerably in the last year.

On Wednesday, Philippine President Rodrigo Duterte said he would raise the issue of territorial disputes in the South China Sea at an Asia-Pacific Economic Cooperation (APEC) meeting in Vietnam.

He said China had to clarify its intentions in the South China Sea and inform neighbors if they were free to navigate the contested waters. "You want to control the passage or do we have the free passage?" he said, adding that he would not be confrontational when raising the issue.

For 50 years, ASEAN has given Southeast Asian nations a forum to address a long list of conflicts, catastrophes and crises. But there are limitations to what the association can accomplish beyond business and rhetoric. (07.08.2017)