German scientists in the new field of soundscape ecology are listening in on the animal kingdom using 300 microphones. The young discipline could shed light on the effects of climate change - and what it sounds like. 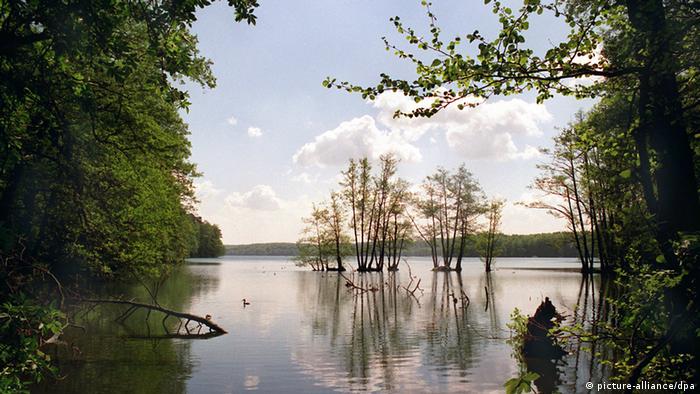 In woodlands north of Berlin, research at the forefront of one of science's youngest disciplines is underway. A large array of microphones has been erected in the forests and meadows not far from Germany's capital, tapping into the rich tapestry of sounds emanating from nature.

Soundscape ecology, or acoustic ecology as it is otherwise known, is - officially-speaking - only a few years old. But researchers hope that the insights it reveals will shed new light on biodiversity - and how climate change is affecting it.

The forest of Schorfheide in the German state of Brandenburg is one of three biodiversity sites in Germany being used by soundscape ecology scientists in a project hosted by the University of Freiburg.

Since September 2015, the microphones have been recording one minute of sound from the environment every 10 minutes - and will continue doing so until the next September, providing researchers with a year's worth of data.

The team is using a total of 300 microphones across the three sites, which also includes the Swabian Alps in Baden-Württemberg and the Hainich National Park.

Sandra Müller from the University of Freiburg, one of the researchers behind the project, said that this is the first time scientists have listened in on so many ecosystems simultaneously over such a long period of time. She has described the project as "unique in the world."

Soundscape ecology: the new kid on the scientific block

Dr Müller told DW that soundscape ecology is a fusion of several different aspects of various scientific fields, bringing together the much older discipline of bioacoustics and landscape ecology, among others.

Although the discipline already existed in some form for a number of years, she told DW that it was only formally defined in 2011. Whereas bioacoustics focuses on single species, she said the aim of soundscape ecology is to take a wider look at the entire acoustical ecosphere, seeing how species interact with each other.

"We want to analyze the whole spectrum of acoustical energy in a landscape," she told DW.

From the rain and wind to different introduced sounds like airplanes, soundscape ecologists can hear in the landscape how these affect each other. "The focus is on the whole chorus and how landscape and animals - everything that produces a sound - interacts with each other, and influences each other."

These influences range from how birds are forced to sing louder to make themselves heard over a gushing river, to chatting walkers inadvertently scaring off animals as they hike through a forest.

Müller has already started the mammoth task of analyzing the data - which will amount to a vast 120 terabytes once the team has finished the recordings in September. That would take a person 30 years of listening 24 hours, seven days a week.

Thankfully for Müller and the team, half a lifetime of being glued nonstop to an audio player will be reduced to one year, thanks to the huge processing power of their computers.

She explained that such a task would have been almost unthinkable a few years ago - and that one of the reasons why soundscape ecology was only able to emerge relatively recently.

One of the things she has noticed so far is how ever-present humans are in the natural audio landscape.

"Human sounds are audible on nearly every recording we make," Müller told DW. "Even deep in the forest, you can hear an airplane every now and then crossing the sky."

Rain in the forest

Sounds from chainsaws, forest workers, church bells, a farmers on their tractors and even New Year's rockets round out the ambient noise, she added.

The new computing power and techniques harnessed by soundscape ecologists can also help scientists in the older field of bioacoustics monitor individual species in order to check the populations of endangered animals.

Methods established by soundscape ecology are helping to speed up analysis of large data sets, Müller explained to DW. "That's a big plus - that you can easily analyze datasets that span a whole year, like in our case."

Müller sees the future of soundscape ecology as potentially playing a significant role in animal conservation. She hopes that a project proposal led by the Koenig Museum in Bonn, to establish biodiversity monitoring stations across Germany, finds funding and gets off the ground.

If approved, she said it would see a network similar to weather stations, to automatically monitor the development of biodiversity in specific habitats that are sensitive to change. And "to permanently monitor how biodiversity changes in Germany, and then throughout Europe."

Acoustic methods would be combined with automatic cameras, and instruments that can analyze the gene pool of certain insects automatically.

According to Müller, soundscape ecology could prove particularly useful in shedding light on biodiversity in hard-to-reach corners of the Earth.

"Like deep in the Congo, where we don't really know what's happening and it's dangerous to go there, but there's an important part of biodiversity there," she told DW.

"Soundscape ecology could help give a better understanding for monitoring how the environment changes, what the reasons are for this change, and how we can manage it in a way to allow the changes to improve our ecosystem and not degrade it."

UNESCO has expanded its network of model regions for sustainable development, with new areas of valuable biodiversity recognized around the globe. (21.03.2016)

Europe may be looking at the end of the economically and ecologically valuable ash tree, according to new reports. The prized tree is under attack from invasive insects and fungus. (03.04.2016)