Australia has sealed a free trade deal with China, much to the consternation of the US. DW columnist Frank Sieren explains. 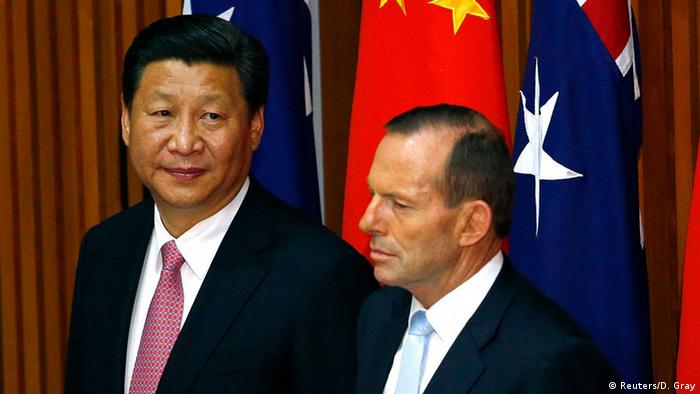 The G20 in Brisbane, Australia, was overshadowed this weekend by the tussle between Russia and the West. But what with all the state and government heads worrying about the potential effects of the conflict on the world economy, one decision that will actually have a very positive effect - and significantly rejig the balance of power in the Asia-Pacific region - has been somewhat overlooked. On Saturday, while US President Barack Obama was hailing the US alliance with Australia in his keynote speech at the University of Queensland, describing it as "stronger than it has ever been," the news came through that China and Australia were planning to sign a free trade agreement.

And that's what they did. The two-day summit apparently struck the Chinese government as a good opportunity to seal the deal. In economic terms, Asian countries are moving closer to China - as demonstrated at the recent APEC summit in Beijing, the ASEAN summit in Myanmar and now at the G20 in Brisbane, with Beijing signing free trade agreements with South Korea, strengthening trade with Vietnam and the Philippines and now joining forces with Australia.

Beijing has also earmarked $50 billion (40 billion euros) for a new Asian infrastructure investment bank, which will rival the Asian Development Bank that is dominated by the US and Japan. Even German Chancellor Angela Merkel felt compelled to remark that the Europeans should be careful not to end up sidelined. "The Asian side is a long way ahead," she said in Brisbane.

Frank Sieren, who lives in China

During the financial crisis, China's unflagging demand for raw materials helped keep Australia out of a recession. But the mining boom is finally starting to die down, and the Australian government hopes that the new trade agreement will usher in new growth opportunities. Ideally, it will help Australian banks, universities, and lawyers profit from the rising demand for their services among the Chinese middle class. The new deal with China is slated to boost the Australian economy by $14 billion, $1 billion of which will come from cattle exports. According to Australian Trade and Investment Minister Andrew Robb, Australian venture funds alone can expect Chinese investment of $500 million.

Given that China has been Australia's most important trade partner for some time now, the new agreement makes sense. Almost 100 percent of Australia's natural resources, energy, and manufacturing experts will be duty-free once it goes into effect. "The Australian government has secured the best-ever market access provided to a foreign country by China on services," said Robb in a statement.

The terms of the agreement show just how much it means politically to Beijing at this point in time. So much so that Beijing even left a number of controversial issues unmentioned, such as its long-standing push for free access to the Australian market for Chinese workers.

Less room for maneuver for the US

But the Americans are far from happy. The more dependent Australia becomes on Chinese markets, the less room for maneuver it has itself. But there's very little that Obama can do. He's in no position to promise Australia economic growth in the way that China can. And which country would forfeit such a flourishing market on its doorstep merely out of loyalty to the US anyway?

If Obama was needled by his Asian partners' avowal of the new multi-polar world order on the occasion of one of his rare trips to Asia, despite his own hopes for strategic monogamy, he wasn't going to let it show. But in the course of the summit, he began to go on the defensive. "We will continue to deepen our engagement using every element of American power - diplomacy, military, economic, development, and the power of our values and ideals," he said, stressing that "the United States is and always will be a Pacific power." In the past, this hardly needed to be pointed out. Now, it's too late.

Memo to China, US: Stay out of ASEAN's business

China and the United States should leave the ASEAN countries to find their own family dynamic, says DW columnist Frank Sieren. (14.11.2014)

China wants everything to go perfectly as it prepares to receive important guests for the upcoming APEC summit. Their efforts, however, aren't appreciated by all in Beijing, says DW's Frank Sieren. (09.11.2014)