Serbia has presented for the first time the FK-3 air defense system recently purchased from China. The acquisition of military equipment from China and Russia has been frowned upon in the West. 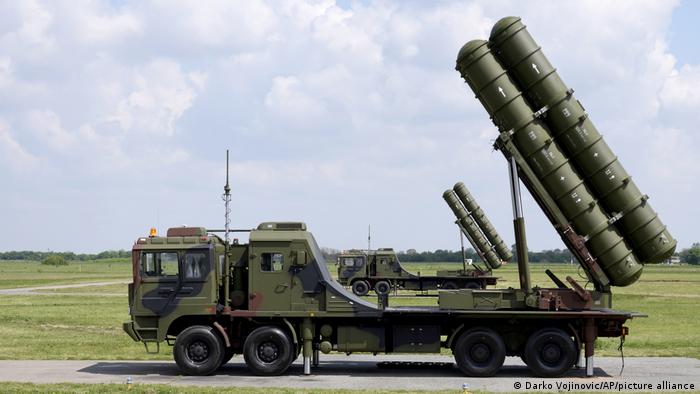 Serbia on Saturday displayed its new surface-to-air missiles, manufactured in China, and other military equipment acquired from both Russia and the West.

Members of the public and the media were invited to the parade at the Batajnica military airfield near Belgrade, where Chinese and French missiles were displayed alongside Airbus helicopters, Chinese-armed drones and Russian MIG-29 jets.

Vucic 'proud' of the Serbian army, wants to stay 'neutral'

"We have recently been able to invest more money and as a result equip our army with up-to-date resources," President Aleksandar Vucic said on the sidelines of an air and weapons show at Batajnica.

"I'm proud of the Serbian army, I'm proud of a great progress," Vucic said. "We're going to significantly strengthen our fighter air force. Serbia is a neutral country, and Serbia must find solutions enabling it to preserve its sky and its state."

While procuring military equipment from Moscow, Belgrade has voted against Russia three times at the United Nations, stopping short of sanctioning its ally of many centuries.

Disapproval from the West

The United States had advised Serbia not to purchase the air defense system from China.

The delivery of the FK-3 missile system prompted several Western countries, including Germany, to warn Belgrade that it expected the Balkan country to align its foreign policy with the European Union's if it wanted to maintain aspirations of one day joining the bloc.

Germany's coalition government has made it clear that the Balkan region is high on its list of foreign policy priorities. One early signal in this direction was the nomination of the Green Party lawmaker Manuel Sarrazin as the government's special representative to the Western Balkans.

The governing coalition of the Social Democrats, Greens and Free Democrats has intensified Balkan engagement since Russia invaded Ukraine on February 24.