Serbs head to the polls on Sunday to vote in the presidential and parliamentary elections. President Aleksandar Vucic, who is likely to stay in power, has benefitted from the media limelight amid the war in Ukraine. 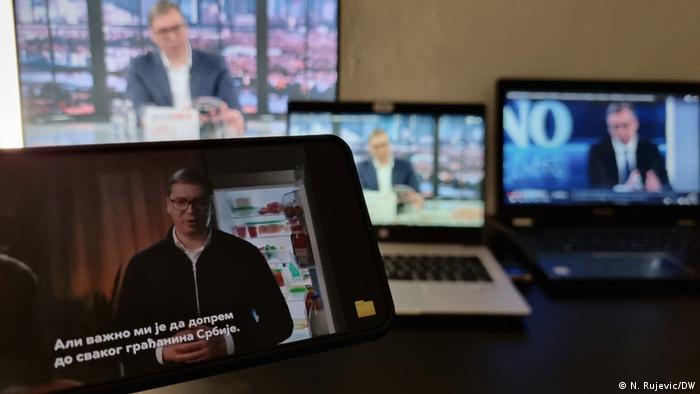 Wherever Serbian President Aleksandar Vucic takes the stage to campaign for his reelection, he is greeted with roars of applause as supporters wave Serbian flags.

It is difficult to say whether these are authentic or staged displays of affection. In any case, Vucic's reelection campaign is a highly organized affair — and nothing is left to chance — with thousands of supporters arriving in buses to take part in the rallies. Independent Serbian media outlets report that municipal employees are required to attend.

"We want to achieve an even clearer victory this time, with Serbia voting for the future, liberty and stability," Vucic said at a recent rally. 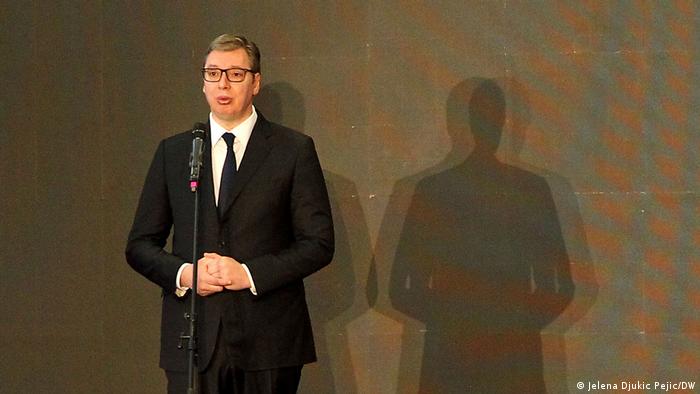 Aleksandar Vucic has held key Serbian posts for a decade

Serbia will see a spate of key elections this Sunday: Voters will cast ballots in the presidential, snap parliamentary, and Belgrade regional elations. Many expect Vucic's Serbian Progressive Party (SNS) to emerge victorious.

A major Belgrade betting company is offering just €2 in winnings on a €100 ($110) bet placed on Vucic's win. Polls, too, suggest the incumbent could maintain the presidency in the first round of voting — and his party is expected to win an absolute majority.

Provider of stability amid war?

Amid Russia's war on Ukraine, Vucic has reiterated in television interviews that his victory would deliver "peace" and "stability." While Serbia — an EU candidate country — condemns Russia for violating Ukraine's territorial integrity, it did not join in Western sanctions targeting Moscow.

One reason is that many Serbs feel culturally and historically connected to Russia. Another is that Serbia's leadership knows the country is heavily dependent on Russia for energy. And when it comes to the Kosovo issue, Russia takes Serbia's side. Neither Moscow nor Belgrade recognize the independence of the former south Serbian province. 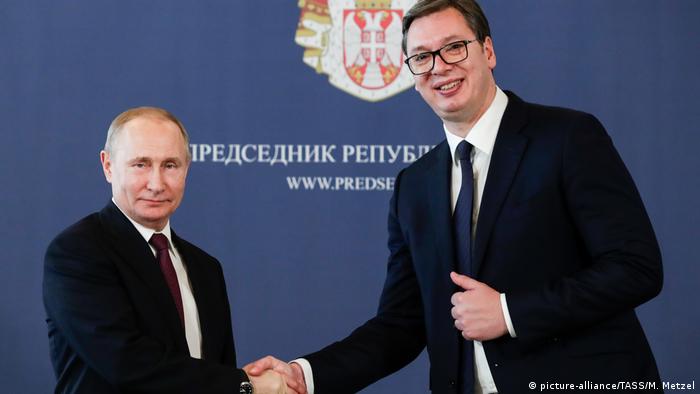 With the war in Ukraine dominating the headlines, Vucic has benefited. He tallies how many tons of wheat, maize and sardines the country has stockpiled for emergencies. He presents himself as the guarantor of peace safeguarding the precarious Balkans.

"This propaganda aims to instill fear in people," philosopher Vladimir Milutinovic, author of a book on Vucic's rhetoric, tells DW.

"The tabloids write that economic collapse is imminent elsewhere, that famine is even looming in Germany. Such statements are intended to cast Serbia as an oasis of stability."

For 10 years, Aleksandar Vucic has held leadership posts in Serbia. His Serbian Progressive Party controls most major television stations and tabloid papers, in addition to state-run companies and municipal administrations.

On television chat shows, opposition lawmakers are regularly vilified as thieves and traitors. Vucic has referred to his political party as a catch-all movement for everyone, regardless of ideology. The party has some 700,000 members — that's one-tenth of Serbia's entire population. The reason, however, is that it's almost impossible to get a job in the civil service, government, or state-owned companies without a party membership card.

"This allows Vucic to take contradictory positions and appeal to voters on all sides. He makes agreements with Kosovo, yet also spouts fiery nationalist rhetoric — or he boasts of how Serbia was one of the first countries to secure enough coronavirus vaccines, then quickly lifts all measures against the pandemic."

Opposition parties struggling to get heard

That leaves Serbia's opposition with limited options for winning over voters. Their main campaign issues are addressing corruption, environmental degradation, and drawing attention to the government's alleged ties to the mafia — none of these issues garnered much attention since war broke out in Ukraine. 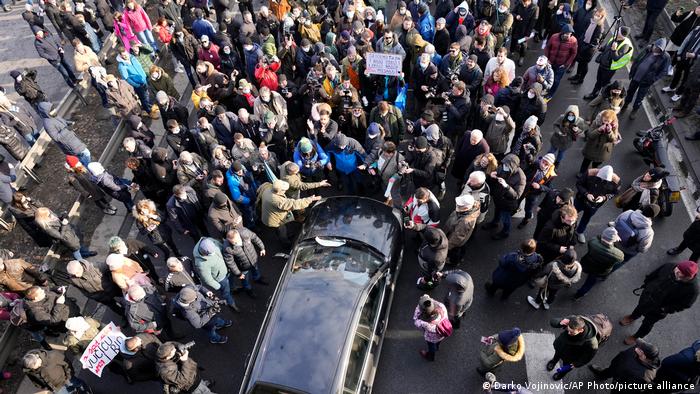 Just a few months back, opposition figures were finally beginning to get their message across. Environmental activists had blocked several highways to protest against a large lithium mine planned to open in western Serbia. Critics feared the Anglo-Australian mining company Rio Tinto would cause serious environmental damage and shift profits out of the country.

President Vucic was forced to switch into crisis-management mode. Sensing the issue could harm his reelection campaign, Vucic revoked Rio Tinto's mining permit. And with that, public interest in the issue vanished almost overnight.

Game of cat and mouse

Such political dominance would be almost unthinkable without the party's sway in Serbian media and the practically limitless financial means, writes independent weekly Vreme.

Investigative reporters recently revealed that the party had spent some €23 million ($25 million) on election campaigns between 2015 and 2021 — three times more than all opposition parties combined. This means the regime is in control of everything and "can play a game of cat and mouse with its political opponents," according to Vreme.

Opposition parties largely boycotted the 2020 parliamentary elections, citing unfair conditions. This year, several opposition coalitions are expected to win seats in the legislature. The United Serbia coalition, a broad alliance of centrist parties, is projected to take between 15% and 20% of the vote. Their presidential candidate, Zdravko Ponos, a retired chief of staff in the Serbian armed forces, could fare even better.

The green alliance Moramo, meaning "We Must," could also pass the 3% threshold and enter parliament. Unimaginable in Serbia until recently, the environmental parties gained momentum from their fight against the Rio Tinto mine.

The country's nationalists and right-wing camp, in contrast, appears more fractured, fielding five presidential candidates and just as many electoral lists. Their positions and nationalist slogans. do resonate with many voters. More than 80% of Serbians say they reject joining NATO, and two-thirds say Russia is Serbia's most important partner. Even so, Serbia's right-wing and nationalists don't have a good chance of securing any seats. 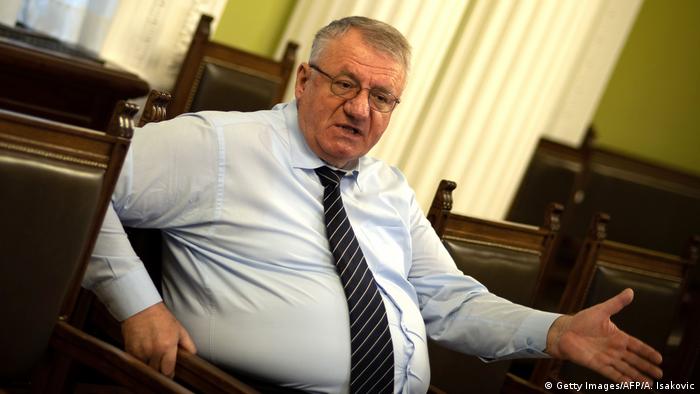 Political analyst Bursac says the reason for this is that many in Serbia are more concerned with social and economic issues, rather than the Kosovo question and related topics. Today, he says, nationalism is not the basis for Serbian populism, but merely an additive.

"Vucic's main voters since 2012 have been those who have lost out to the economic crisis: pensioners, housewives and low- to middle-income workers," says Bursac. "In the election campaign, the president promises new factories, highways and hospitals. The message is clear: There is hope for Serbia and for everyone."

Some observers, however, warn that this approach will entail massive public debt.  The price of food and energy could climb even further after the election. Analysts are also convinced that Brussels will increase its pressure on Serbia to join the EU in targeting Russia with sanctions.

Radmilo Markovic contributed to this report