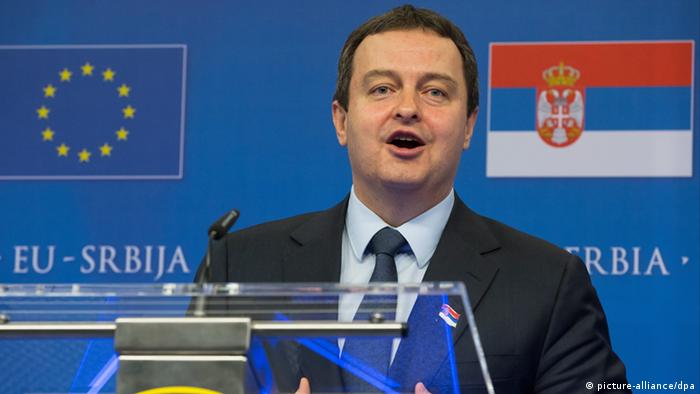 Serbian Prime Minister Ivica Dacic (pictured above) told reporters on Tuesday that he hoped his country would be able to complete the accession process, which typically takes between six and 10 years, by 2014.

"This is the most momentous, the most important event for Serbia ever since the end of World War II," Dacic said. "This is formulating the values we wish to implement, this defines the society we want to have," he added. "From today onwards, Serbia becomes formally part of an admission procedure which leads to the family of European nations."

Serbia first applied to join the European Union (EU) in 2009, but it wasn't granted the status of an EU-candidate state until three years later - after it had taken steps to normalize relations with its breakaway former province, Kosovo.

The EU's enlargement commissioner Stefan Fuele, used Tuesday's press conference to stress the need for Serbia to continue along that path, if it was to bring its accession negotiations to a successful conclusion.

"Belgrade will need to remain fully committed to the normalization of relations with Pristina," Fuele warned. "Starting accession negotiations means entering in a very demanding phase. Hard work will be needed and many challenges lie ahead," he added.

The next talks between Belgrade and Pristina, which are being mediated by EU foreign policy chief Catherine Ashton, are scheduled for next Monday.

In order to be granted membership to the EU, a candidate state must implement a raft of reforms to bring it into line with norms set out by the bloc.

Serbia's talks are to begin with two of the most difficult of the 35 negotiating chapters to complete, those on the justice system and basic rights. Without giving a date, Fuele said the first of these could be opened before the end of this year.

Serbiawould be the third country from the former Yugoslavia to join the European Union after Slovenia, which joined in 2004, and Croatia, which entered the bloc last July.

Serbia has taken a step closer to joining the European Union. The bloc has set a date for the start of accession talks in recognition of Belgrade's democratic reforms and efforts in normalizing relations with Kosovo. (18.12.2013)

European Union ministers have unanimously recommended the launch of accession talks with Serbia by January 2014 and negotiations with Kosovo on a lesser stabilization and association deal. (25.06.2013)