Opinion: Brussels or Moscow? Vucic needs to decide | Europe | News and current affairs from around the continent | DW | 04.04.2022 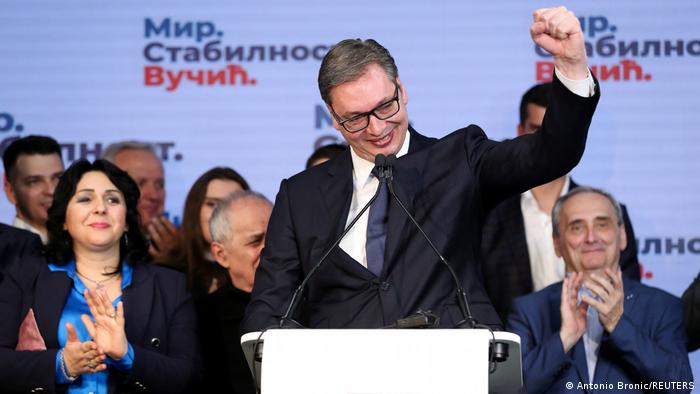 The result of the Serbian election was more or less a foregone conclusion. Aleksandar Vucic, the giant with a baby face, won the election. The new president is the old one. Even if one wants to delegitimize him by describing him as an autocrat or the leader of a "hybrid democracy," there is no doubt that this powerbroker, who has held various positions in the past 10 years, has an economic recipe for success.

Even though many young Serbs are prepared to leave the country in search of greener pastures, if they have not already moved to Frankfurt or Vienna, voters apparently wanted to show their gratitude to Vucic for the country's economic revival. The GDP per capita has risen by a remarkable 40% in the past five years, unemployment is falling, national debt is low, and the country of seven million can boast abundant foreign exchange reserves.

An ideology-free rise to victory

It's a strategy that has paid off with people having more money in their bank accounts and being able to put food on the table. Vucic — the much-maligned stabilocrat who likes to bully the media , award jobs for party affiliation, and is in control of the police, the secret services and judiciary — did not win by resorting to nationalist pathos. On the contrary, his politics are free of ideology and his Serbian Progressive Party (SNS) presents itself as a catch-all movement, which has managed to dwarf the opposition and marginalize extreme nationalists. The program is Vucic and it is all about power.

But now the president will have to decide: Brussels or Moscow?

Oscillating between East and West

With the war in Ukraine, Serbia's relationship with Russia, a cozying up characterized in the past as "pathological love," is undergoing a stress test.

One could say that Serbia does not know what it wants. Like Yugoslavian leader Tito in his day, Vucic has oscillated between East and West. Serbia receives gas from its "best friend" Russia at a discount, but at the same time — over the past 15 years — it has received subsidies of around €3 billion from the EU's Pre-Accession Assistance program.

Since 2014, Serbia's negotiations with Brussels to join the bloc have been dragging on. But the Russia-Ukraine War has injected new impetus into the half-hearted accession talks. After years of Brussels repeating a mantra of demands of the states of the Western Balkans, the door to the EU is now wide open. The issues at hand are no longer rule of law, a free media, or corruption. Today, the EU wants to protect the countries of southeastern Europe — particularly Serbia — from Putin's foreign political clutches. Belgrade now needs to make up its mind.

Belgrade not ready to give up Kosovo

Serbia's big Slav and Orthodox brother, Russia is dear to Belgrade. For years, Moscow has used its veto in the UN Security Council to block Kosovo from joining the intergovernmental organization. Belgrade is not quite ready to give up Kosovo,  the "cradle of Serbian civilization," which declared independence in 2008, and has been recognized as a sovereign state by almost 100 UN members though not by Serbia or Russia.

It is no surprise then that Serbia reluctantly supported the UN resolution against Russia's invasion of Ukraine. Vucic opposed sanctions with his pro-Russia stance finding favor among many voters.

Now that the strategy has paid off and the strongman's victory is confirmed, the question is what Vucic will do with his political mandate.

Russia's attack on Ukraine has elicited an extra-large "Welcome" sign from Brussels. This is a historic chance, not only because of the circumstances. Serbia is European and should become a part of the EU fold. That would be good for the whole region.

This opinion piece was originally written in German.