Germany's foreign minister has called on Serbia and Kosovo to resume talks on normalizing bilateral relations. The EU has made this a condition for the two countries to join the bloc. 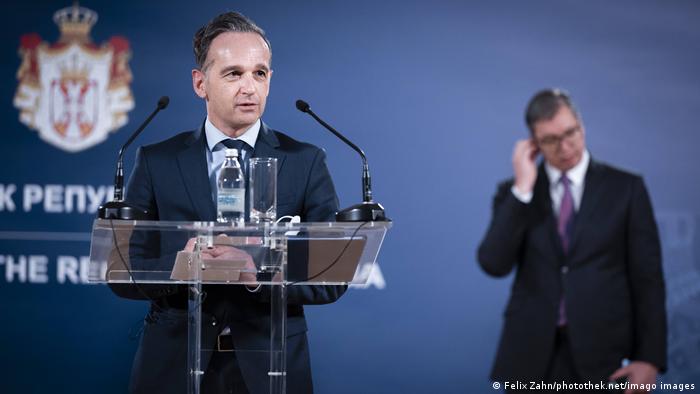 The Serbia-Kosovo issue has troubled the Balkans for two decades

Serbia and Kosovo must crank up efforts to negotiate successfully on a normalization process, German Foreign Minister Heiko Maas said on Friday after meeting with Serbia's President Aleksandar Vucic in Belgrade.

The unresolved territorial dispute between the two countries is seen as a major hindrance to achieving stability in the Balkan region.

What did Maas and Vucic say

Maas pointed out that both countries now had governments with stable majorities, making it a propitious moment to restart talks.

"It is the right time to continue the normalization process and to achieve results," Mass told a press conference.

"It is important not to hold this dialogue just for dialogue's sake; there must be results. Germany stands ready to help," he said.

In response, Vucic said that his country was ready to "work hard" to reach a "compromise solution," saying both Serbs and Albanians needed peace for a secure future.

"We do not recognize Kosovo, but we are ready to discuss the future of the entire region in a serious and responsible way," he said, adding, "The essence of progress is in peace."

Why are there problems between Serbia and Kosovo?

Kosovo is a former province of Serbia that Belgrade lost control of in 1999, in one of the last chapters of the break-up of the former Yugoslavia, when ethnic Albanian separatists successfully fought Serb forces once aided by a NATO bombing campaign.

Kosovo went on to unilaterally declare independence in 2008. The move, though recognized by most EU countries and the US, has not been accepted by Serbia or its allies Russia and China.

The EU, which has told both countries they must normalize relations to become bloc members, has been mediating talks on the issue. They have been stalled since September, partly due to the coronavirus pandemic.

Under US brokerage, leaders from Serbia and Kosovo signed a deal to normalize economic ties in what Donald Trump has praised as a "truly historic" move. Serbia also agreed to relocate its embassy in Israel to Jerusalem.