Alexander von Humboldt's Latin American travel journals are a wonder. Their pages detail his expedition and are once again stored in the vaults of Berlin's State Library. Will they ever reveal all their secrets? 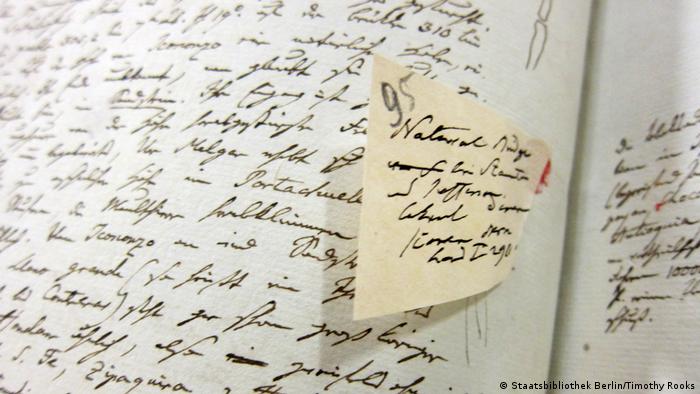 Filled with excitement to see and film Alexander von Humboldt's famous travel journals at Berlin's State Library, we arrived at the big yellow and glass building two hours before it officially opened.

The journals had already been brought out of their underground vault and were waiting for us, each in its own acid-free box. When taken out, each book was nestled on a velvety cushion to avoid damaging the spine. Sitting there on a table in the middle of the reading room, it was a rare treat as the originals seldom come out of hiding.* Seeing them was like seeing a unicorn, only better.

A few years ago, when the library bought the nine leather-bound volumes it was heralded as a coup. Purchased from descendants of the Humboldt family for €12 million ($13.7 million), they are some of the most expensive manuscripts to ever change hands. Yet the story of the "Humboldt Tagebücher," as they are known in German, is not so simple. The books themselves traveled far and wide and have a complicated — and secret — history. 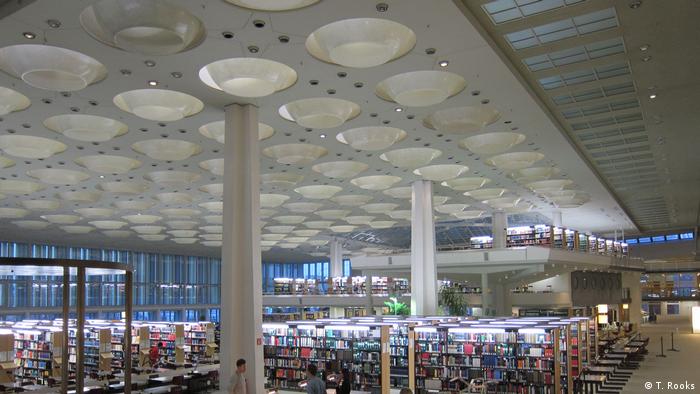 The main reading room of Berlin's State Library. The nine valuable travel journals are kept in a vault

For Humboldt, the journals from his 1799-1804 tropical American adventure were one of his most important tools serving him like an external hard drive in his quest to popularize science.

He started writing them in France and continuously added to them for the next six years — through Spain, the Canary Islands, across the Atlantic, in modern-day Venezuela, Cuba, Colombia, Ecuador, Peru and Mexico. At first he wrote in German before switching to French. There are also notes in Spanish, Portuguese, Italian, Greek, Latin, English as well as a number of indigenous languages.

Though the paper is thick and robust, Humboldt's miniscule handwriting is difficult to read today. He mixed the ink himself. Usually a medium brown, sometimes it was darker, sometimes almost black. 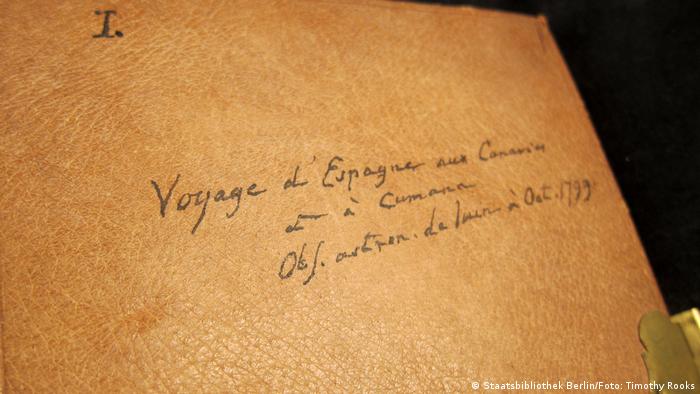 The cover of one of Humboldt's travel journals labeled in French in his own hand: 'Voyage d'Espagne aux Canaries et à Cumana Obs. astron. de Juin à Oct. 1799.' It includes his departure from Spain and the Atlantic crossing and is filled with astronomical observations

At their heart, the journals tell the story of a pioneering and fearless adventurer who often risked his life to record notes on everything from zoology and indigenous peoples to history, plants and the stars. The books endured extreme tropical humidity, freezing temperatures and earthquakes. They even survived a shipwreck on the Orinoco River. A few watermarks attest to this wet occasion, just as ink blotches tell of moments of clumsiness, perhaps due to wobbly rafts, waddling mules, a plague of mosquitoes or the aftereffects of being stung by electric eels.

What sets the journals apart from Humboldt's published books is the insight they give into how he actually worked and developed his ideas. The journals are jammed with diagrams, maps and drawings. They include notes and sketches on sunspots, solar and lunar eclipses, rock formations, mountains and volcanoes, barometric measurements, and trigonometric calculations of height, distance or the curvature of the Earth. 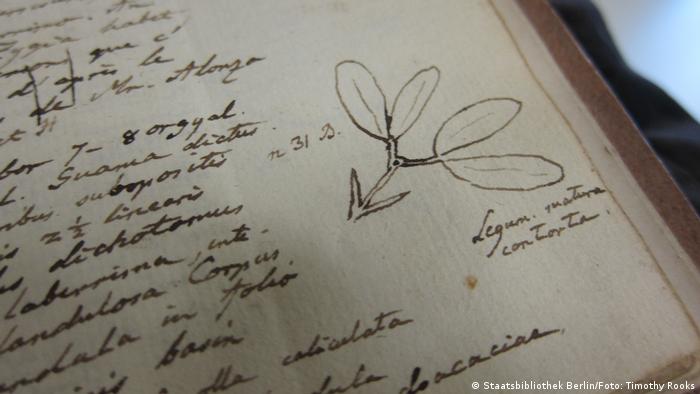 A botanical detail in the first volume of Humboldt's original journals. Labeled 'Legum. matura contorta' it was sketched in Cumana, in present-day Venezuela in 1799

The fruits of adventure

Safely back in Europe after five years in Spanish America, the 34-year-old Humboldt never let the journals out of his sight for very long. For the next 55 years, he continued to use the notebooks, adding to the margins or pasting in scraps of paper with notes or corrections.

A few years before he died he completely rearranged the journals and had them rebound in the soft brown leather we know today. We are left with a mass of volumes and loose papers that only Humboldt could cross reference with his astonishing memory. 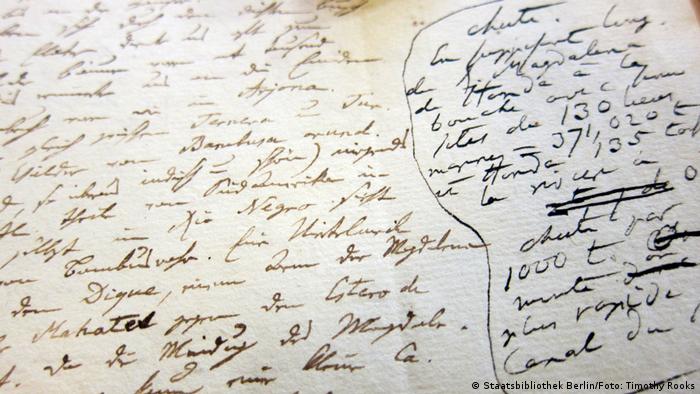 A page of the journal with notes in the margin, a typical Humboldt practice

Whatever they once looked like, they are no longer a classic travelogue in chronological order, nor are they thematically organized. Confusingly the 4,000 pages not only cover his time in tropical America, but also include seemingly unconnected notes on previous trips as well as his time in Italy in 1805.

Strangely, whole sections are bound in upside down and there are dozens of blank pages throughout. Regrettably, there seems to be some missing parts like the return voyage across the Atlantic.

Humboldt never married or had children. When he died in 1859 at the age of 89, he left most of his possessions to the Seifert family who had taken care of him for over three decades. The only exceptions were a batch of manuscripts and his travel journals, which were to be guarded by his brother's family, but be physically kept at the city's observatory for use by other scientists.

This never happened. Instead, only some of his papers were handed over to the observatory and Humboldt's niece kept the journals at Schloss Tegel, the Humboldt family home, in a desk drawer where they stayed until the Russians ransacked the place at the end of World War II.

The journals then landed in Moscow's Lenin Library, but in early 1958 were returned to Communist East Germany. For decades, neither the family nor West German diplomats were able to get them back. Only after the fall of the Berlin Wall did the family finally get the journals and gladly loaned them to the Berlin State Library for around a decade. 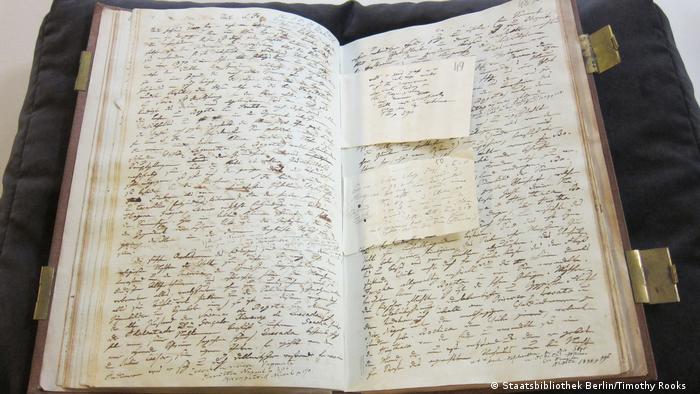 One of Humboldt's travel journals with notes pasted in. It illustrates how he constantly revisited the books and added to them

In 2005, for unknown reasons, the family changed their mind, repossessed the journals and spirited them off to London. The government made a huge oversight in not adding them to the list of valuable cultural heritage assets of national significance that would have forbid their sale abroad. Some say this was not an oversight, but a situation based on trust — and done out of respect for property that had already been confiscated once. Yet once out of Germany nothing could be done. Bidding would be open to everyone and only drive up the price, destination unknown.

After years of drawn-out negotiations, a purchase price was agreed upon. By early 2014, the journals were back in Germany at the State Library. That fall each page and scrap of paper had been scanned front and back and put online. Finally, 155 years after Humboldt's death, his wishes were fulfilled and his travel journals were available to scholars. Not only that they are freely available to anyone in the world who has an internet connection — something even Humboldt could never have dreamed of.

Now parallel projects at the Berlin-Brandenburg Academy of Sciences under Tobias Kraft supported by Ottmar Ette, a Humboldt expert at the University of Potsdam, and the Berlin State Library are working to decipher the journals, find their deeper meaning, create an annotated edition of all his travel-related manuscripts and put it into a 21st-century context. 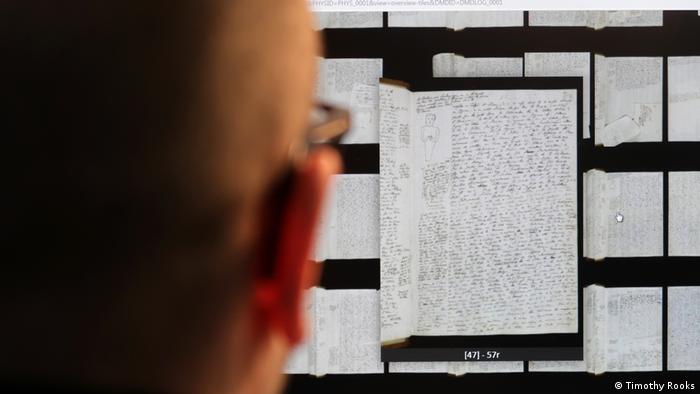 A reader looking at Humboldt's travel journals on the Berlin State Library's online platform. Each page is scanned in high resolution, even the pasted in notes are included front and back. It is an invaluable resource for researchers around the world

Back at the State Library, the cameraman and I moved to a smaller room to continue filming the journals as it was getting close to opening time. I wanted to soak up as much Humboldt as I could. We photographed the covers, the insides and details from every angle.

Though I should have been grateful for the few hours with the journals, a sense of sadness came over me as a librarian put them back in their protective boxes. I wished that I had been better prepared and wanted more time.

The books are compact little treasure chests full of secrets and I wanted to know more: What does it all mean? Were they really where we think they were all those years? Where are the missing parts? Why did Humboldt rearrange them late in life?

A talented team is on the job. In the meantime I can flip through the journals online whenever I want and zoom in to see every scratch of Humboldt's pen and maybe even hear the wild jungle along the Orinoco growling, buzzing and humming with unbound nature.

*In honor of Alexander von Humboldt's 250th birthday, all nine volumes of his travel journals will be on display at the Berlin State Library from September 13-15, 2019.

Humboldt returned to Berlin in 1827 after working for two decades in Paris. For the next 30 years, he labored over his most ambitious project to unite everything known about the whole universe in a single work, "Cosmos." (29.07.2019)