Diaries written by the famed German explorer Alexander von Humboldt as he toured central and southern America 200 years ago are to be sold by his descendants. Germany's Prussian Cultural Heritage Foundation is the buyer. 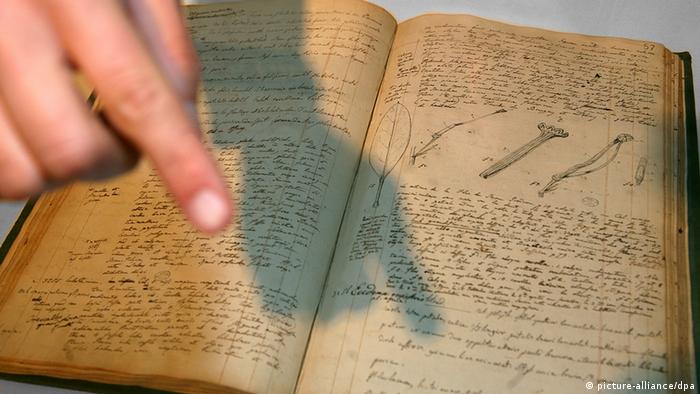 A Berlin-based foundation belonging to Germany's federal and state regional governments announced on Wednesday that it finalized the purchase of the partly unpublished Humboldt diaries, but without disclosing the price.

Foundation president Hermann Parzinger said the 4,000 pages documenting Humboldt's 5-year journey from 1799 and 1804 would be kept in the State Library of Berlin, which is part of the foundation.

The leather-bound works are to be handed over early next year and will then be closely examined over a 3-year period by a joint research team at the library and Potsdam University.

Private and public donors had financed the purchase from the current owner Ulrich von Heinz, a descendant of the Humboldt's family, the foundation said.

It added that the writings were "unique and internationally highly significant."

The negotiations had been complicated, according to a spokesman for Germany's States Minister for Culture Bernd Neumann.

Ulrich von Heinz said on Wednesday that he had always wanted the diaries to remain in Berlin. He would use the earnings for the upkeep of the family palace in Berlin's eastern Tegel district, where Alexander and his brother Wilhelm von Humboldt once lived.

On the trail of Alexander von Humboldt

Alexander von Humboldt is famed for his expeditions to South America and Russia. His ideas and insights inspire scientists to this day. We follow in the footsteps of this Prussian naturalist, geographer and explorer. (17.06.2013)

An intermediary for the Heinz family, Christoph Count Douglas, said the possibility of the dairies being sold abroad had been averted.

Previously, "great interest" had been expressed by the Congressional Library in Washington, the Getty Institute in Los Angeles and wealthy investors in Mexico, Douglas said.

In May 1945 at the end of World War Two, the Soviet Red Army took the diaries to Moscow.

In 1958, the-then Soviet Union transferred the works to the State Library, which then lay in communist East Berlin.

In 2005, after Germany's reunification, the foundation gave the diaries back to the descendant owner. They were not, however, listed as national heritage - a status that would have outlawed sale abroad.

Humboldt's journey was previously best publicised in a travel report he compiled with his fellow explorer Aimé Bonpland. But that journal only covered a third of their 5-year exploration of the Americas.

Although 200 years old, the "extremely entwined" texts, which showed that Humboldt made amendments, amounted to a "very modern" approach, said Oliver Lubrich, another researcher, at Switzerland's Bern University.

Humboldt, when climbing Ecuador's Mount Chimborazo, never portrayed himself as a hero, but spoke with humor, said Lubrich, about being forced to turn back just short of its summit.