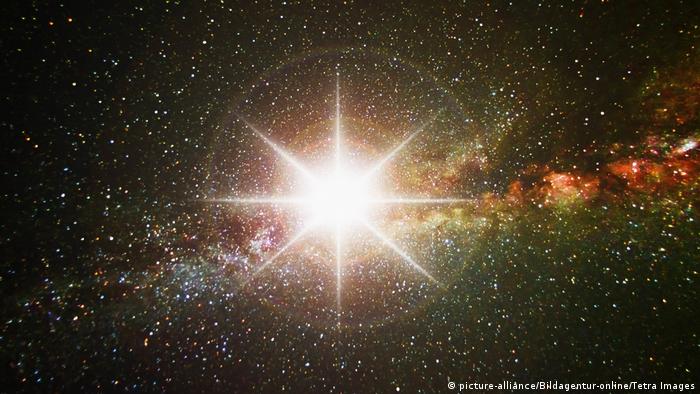 At 34, Alexander von Humboldt had already climbed the highest mountain in the world and spent a fortune on a Latin American expedition collecting plants, animals, artifacts and reams of statistics. Most importantly, he had survived the dangerous journey and was back in Europe with astonishing tales to tell.

For the rest of his life Humboldt was sought after by kings, chancellors, ambassadors, prime ministers, emperors, artists and scientists. Some wanted his advice; some simply wanted to be close to genius. Through these many encounters, he was elevated to a position that had never existed before or afterwards — a scientist who moved in the absolute highest circles, a legendary sage. But Humboldt earned that reputation the hard way.

He returned from his five-year adventure in the Spanish American colonies in 1804, afterwards he went to Berlin in November 1805. It was a tumultuous time in his homeland. Prussia and France were at war, and in October 1806, the royal family fled to safety as Napoleon marched into the capital. Prussia lost half its land and was forced to pay huge reparations.

To help renegotiate the reparation payments, Humboldt was sent to Paris in November 1807. From the start, he probably had more than his country's interests in mind, for he lived in Paris for the next 20 years. Despite the difficulty of being a German in France during times of war, he saw no other possibility. He simply ignored any accusations of spying, even when Prussian troops later marched into the city; he was a scientist on a mission.

Humboldt was no stranger to publishing. He knew that Paris was the center of the academic world and had the illustrators, engravers, typesetters, printers and scientific cooperation that he needed to prepare the results of his American voyage for publication.

Since Humboldt did not have government or institutional support, he paid for the books' production costs himself from his ever-shrinking inheritance. These were not just guidebooks. What he produced was unlike anything a private person had ever created before. 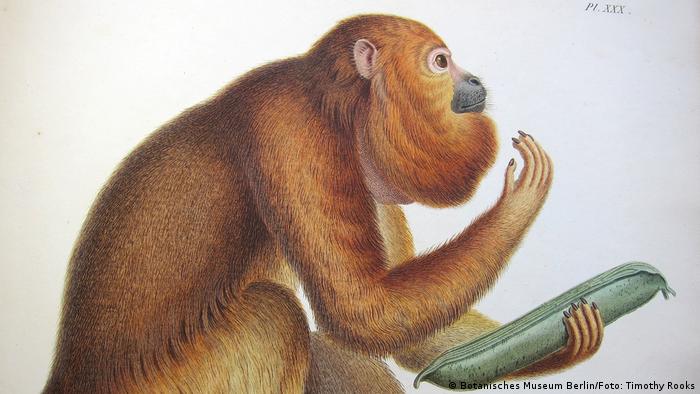 Working with handwritten manuscripts, different expert contributors and many artists, the first book appeared in 1807. For the next 30 years more books slowly appeared. The series was only finished when the last section was printed in August 1838, and even then, there was a lot of source material left unused.

In total, Humboldt completed 32 volumes — though the exact number varies depending on how the books were originally bound and what you count. Mainly in French, the books touched on subjects as diverse as botany, astronomy, zoology, and physical geography, with special volumes dedicated to Cuba and Mexico and a popular travelogue. Of these volumes, 19 are large deluxe folios illustrated with over 1,400 sumptuous prints showing scenes, maps, mountains, animals, insects and plants. Some of them are so heavy, it is best to have two people to carry them. They are best read standing up.

Before the decadeslong publication process was over, Humboldt received a call from Berlin. It was not his brother who wanted him back. It was the Prussian king, Frederick William III. At 57, Humboldt was broke. Paying for the journey, his life in Paris and the production of the opulent scientific books had led to his financial ruin. 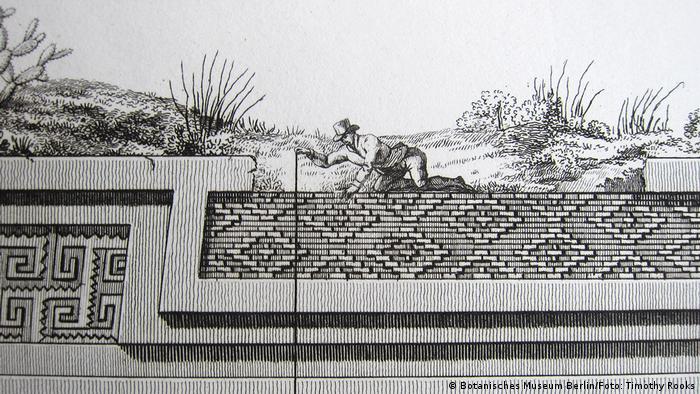 Alexander von Humboldt doing one of his favorite things — measuring. Here he is shown on the ruins of the Palace of Mitla in Mexico's Oaxaca province in 1803

As Humboldt was a Prussian subject, and now completely dependent on a stipend from the king, he packed his bags and moved back to Berlin in 1827. For the king, having the country's greatest scientist nearby added to Prussia's glory.

Humboldt did not disappoint.

Almost immediately after arrival he gave the city an academic glow through a series of 61 lectures on nature and geography at the university. They proved so popular that a month later he relaunched the series in condensed form (16 lectures) in a much larger concert hall.

Read more: Berlin's long-buried imperial past has come back into fashion

Spread out over five months, these open lectures attracted the king, scholars, students and anyone else who managed to get a seat. The talks proved to be the scientific event of the century in Prussia and would give direction to the rest of Humboldt's long life; soon he had a contract to publish the lectures in a book. He would call it "Cosmos."

In an 1834 letter to his friend the author, Karl August Varnhagen von Ense, Humboldt wrote: "I have the extravagant idea of describing in a single work the whole material world — all that we know today of celestial bodies and of life upon the Earth — from the nebular stars to the geographical distribution of mosses on granite rocks."

Since Humboldt had been born, the body of human knowledge had grown exponentially, but he thought it was still possible to put the universe in one or two volumes — everything from plants, astronomy and climate to the oceans, atmosphere and the planet. At the same time, he wanted to draw out all of the underlying connections. This time Humboldt decided to write in his native German. But he tended to have a meandering, unfocused way of writing in any language and misjudged the huge scope of the project.

Finally, nearly a decade after starting in earnest, the initial volume of "Cosmos" was printed in 1845. Volume two followed soon after in 1847 and volume three arrived in 1851. His contract with the publisher was fulfilled, but the writing went on. He had more to say. The fourth volume was finished in 1857. 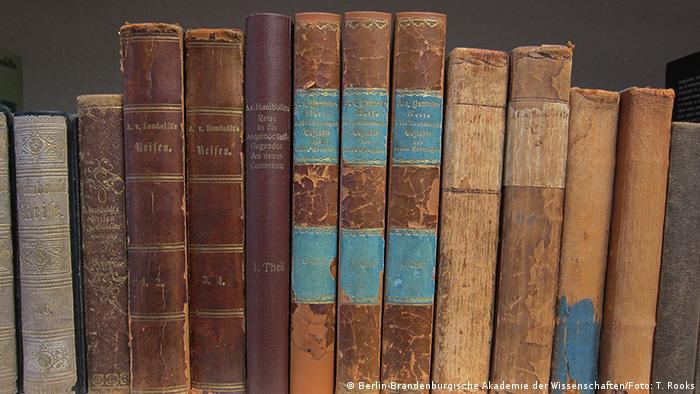 Copies of Humboldt's books at the Berlin-Brandenburg Academy of Sciences

He must have known, however, that no book could include the entire order of the universe. Nonetheless, he was correcting proofs just six weeks before he died. The fifth volume would not see the light of day during Humboldt's life. What he called his "life's work" was incomplete. The final volume was later puzzled together by his assistant Johann Eduard Buschmann and in the end, what remained missing was mankind and its connection to the universe, the most complex part of all.

Perhaps he could have written more if his other obligations were not so time consuming. But Humboldt's life had never been simple. He had become one of the most famous men in Europe and was constantly on the move.

Since 1805, he had been a royal chamberlain and received a royal pension. Though Frederick William III gave him freedom to spend time in Paris, the job often forced Humboldt to dine or travel with the royal entourage, including month-long summer holidays. When Frederick William IV became king in 1840, he made Humboldt a privy counsellor, binding him even closer to the royal court.

The constant planning, packing, entertaining and travel were a huge burden. Take the year 1845 for example. Humboldt started with a visit to King Leopold in Belgium on January 1. Six days later he was with King Louis Philippe of France. He stayed in Paris for four and a half months and was elected the president of the Geographic Society. The first volume of "Cosmos" was printed. After that, he traveled via Frankfurt, Erfurt and Weimar back to Berlin, before joining the king on a four-day visit to Copenhagen in June. In July, he was off for a month to Bonn for the dedication of a Beethoven statue; Queen Victoria was also there and wanted to see him. In the vicinity of Bonn he performed experiments before heading back to Berlin where he would entertain the Russian tsarina in September. Near year's end, he received yet another honorary doctorate degree, this time from Tübingen University.

This is not how he wanted to live his life. He needed the royal money, but he did not need the company of princes. A bachelor to the end, he wanted to write and be surrounded by men of knowledge and talent. Instead, his life was full of disruptions and brought a flood of letters, visitors and costs. 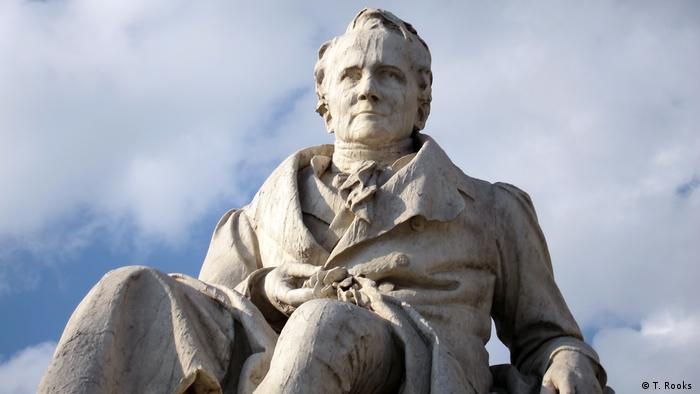 A statue of Humboldt by Reinhold Begas that today stands guard in front of Humboldt University, Berlin

Perhaps surprisingly for a man of such learning, he was improbably incompetent with money. The Latin American trip had cost somewhere between 40,000 and 52,000 thalers of his 90,000 inheritance. In 1822, his bank statement showed he had 14,600 thalers. By 1829, he was 2,900 thalers in debt. He did not live in luxury or spend money foolishly. He was only extravagant in one way: the publication of his scientific books.

Still burdened and anxious about debt 30 years later, Humboldt died on May 6, 1859 only a few months shy of his 90th birthday. But what a life. He had shaken the hand of Thomas Jefferson, Napoleon, the Marquis de Lafayette, Charles Darwin and three different Russian tsars. He never turned away a visitor and helped push through a law that made slaves free once they touched Prussian soil.

When Humboldt was a young man, Goethe, arguably Germany's most famous poet, wrote: "It is incalculable what he will achieve for science." No one has ever been so right. Humboldt's dream was realized beyond anyone's imagination. He had sacrificed his fortune and a life of privilege to devote himself to scientific research. He had traveled from Peru to the borders of China and had published enough scientific papers for 20 lifetimes. He was a one-man academy who changed how we see the world.

Alexander and Wilhelm von Humboldt are viewed as cosmopolitans and adventurers. But rather than painting a heroic picture, the first major show on the brothers in Germany depicts them in their historical context. (21.11.2019)

After an unprecedented five-year tour of South America, Mexico and Cuba, Humboldt returned to Europe a hero. Not only was he honored for surviving such an expedition, he freely shared all of his newly acquired knowledge. (12.07.2019)

What's in a name? The Humboldt edition

The name Alexander von Humboldt may not be instantly recognizable, but it is plastered across the globe in seemingly endless ways. From mountains and squids to schools and flowers, the Prussian explorer is omnipresent. (05.06.2019)