Alexander and Wilhelm von Humboldt are viewed as cosmopolitans and adventurers. But rather than painting a heroic picture, the first major show on the brothers in Germany depicts them in their historical context.

The name Humboldt is synonymous worldwide with education and science. Alexander von Humboldt, born in 1769, collected and documented everything he got his hands on — from plants and rocks to animals and human bones. Wilhelm von Humboldt, two years older, was long regarded as the less eager to travel brother and is often seen only in the light of his educational achievements. Together, their lives and work have inspired countless publications.

But what has been handed down "often has more to do with myth than with historical reality," notes the German Historical Museum. That is why the major show devoted to the brothers, "Wilhelm and Alexander von Humboldt" at the museum in Berlin depicts them primarily as the product of their time and environment — Europe around 1800.

Curators Benedicte Savoy and David Blankenstein gathered 350 pieces from 70 institutions for the exhibition, including paintings, drawings, sculptures, journals and letters as well as research and collection objects. Lenders include the Vatican Museums, the Louvre and Windsor Castle. All of Berlin's museums have contributed to the show, "but that is not always a matter of course," Savoy stressed.

She explained that little is known about the first three decades of the von Humboldt Brothers' lives. Savoy and Blankenstein researched intensively, unearthing items that showed, for instance, that for his anthropological studies, Wilhelm had indeed traveled more extensively than presumed: 9,000 kilometers (5,600 miles) through France and the Basque Country to the southern coast of Spain. They discovered a painting in a small museum in the Basque Country (see picture gallery), in which presumably Wilhelm and his family are immortalized during their long journey. 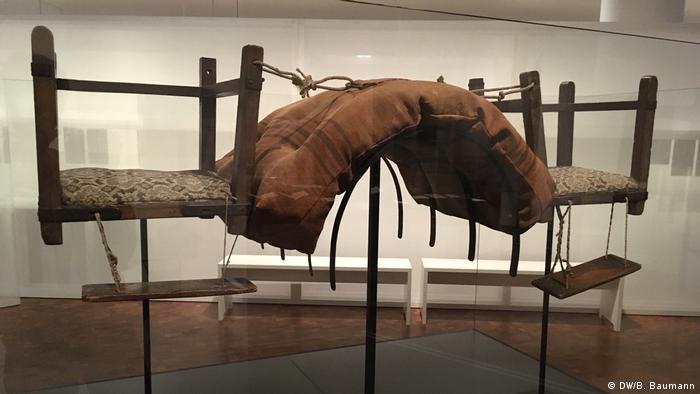 The Baskan riding saddle, the cacolet, suggests the hardships Wilhelm von Humboldt must have faced on his trip

His riding saddle, typical of that time, can also be seen in the show, giving an impression of how arduous Humboldt's excursion must have been. "Visitors should get a feeling for what life was like around 1800," said Savoy.

Research at the core

The exhibition at the German Historical Museum begins with an examination of the brothers' childhood. Wilhelm (1767-1835) and Alexander (1769-1859) grew up in Tegel Palace on the outskirts of Berlin and enjoyed a comprehensive education in the spirit of the Enlightenment — in line with the thinking of philosopher Jean-Jacques Rousseau that children's thirst for knowledge and research should be fostered. Theological dogmas and Protestant morality had no place in their education.

The exhibition then shifts to a reflection of Berlin society around 1800, a time when personal matters, freedom and self-determination were being renegotiated. Wilhelm von Humboldt, for instance, practiced an open marriage with his wife Caroline — the mother of their eight children — for over four decades.

It is the scientific research of the Humboldt Brothers, however, that constitutes the largest part of the show — with Alexander's American Travel Journals taking center stage. Also on display are a number of instruments he used on his expedition through the Americas from 1799 to 1804 and objects from his collections.

Curators Savoy and Blankenstein stressed that the current debate about colonial artifacts and their presentation in museums played a role in the conception of the show. They decided, for instance, not to show the skull Alexander seized while looting a tomb of the indigenous Atures tribe. "It's the head of a dead man we did not want to exhibit," explained Savoy. 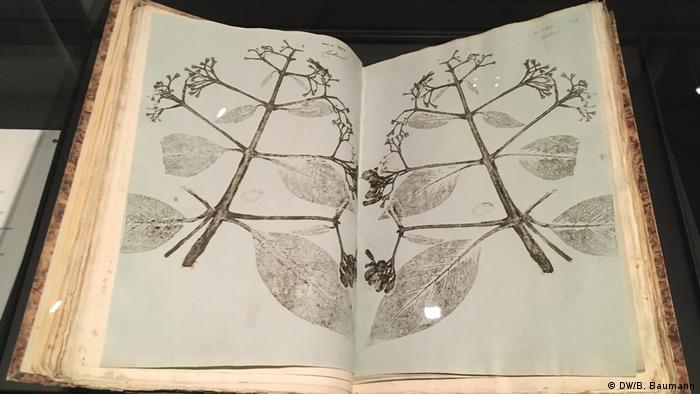 To protect plants from decaying during his journey, Alexander von Humboldt coated them with ink and pressed them onto paper

The subject is not overlooked in the exhibition, however: an exchange of letters between Alexander and the natural scientist Johann Friedrich Blumenbach proves that even then, the plundering of a grave did not seem right — but was still pursued. "You poor people, even in your graves your peace is disturbed," Alexander commented on the theft.

The exhibition conveys that the Humboldt Brothers benefitted from the expansion of the European sphere of influence and that without colonialism, most of the material would probably not have reached Europe.

The show "Wilhelm and Alexander von Humboldt" runs from November 21, 2019 until April 19, 2020 at the German Historical Museum in Berlin and is accompanied by a comprehensive program of tours, lectures, discussions and films.

Alexander von Humboldt is as 'topical as ever’ in a globalized world riven by racism and nationalism, Culture Minister Monika Grütters told guests at Berlin's 250th birthday party for Germany’s universal scientist. (14.09.2019)

Humboldt 2.0: Why a scientist born 250 years ago is more relevant than ever

Alexander von Humboldt measured everything in sight. Though many of his discoveries are hard to categorize or have been superseded, his holistic view of nature led the way to how we see and understand the world today. (13.09.2019)

Humboldt's private life was revealed in two watercolors painted by Eduard Hildebrandt. One from 1856 shows him in his Berlin library and encapsulated his entire life by revealing the cluttered rooms of a wunderkind. (11.09.2019)