Alexander von Humboldt is as 'topical as ever’ in a globalized world riven by racism and nationalism, Culture Minister Monika Grütters told guests at Berlin's 250th birthday party for Germany’s universal scientist.

Berlin staged festivities for its 1769-born explorer and scientist on Saturday inside its partly completed Humboldt Forum, a large-scale museum project named after Alexander Humboldt and his elder brother, educationalist Wilhelm.

"His legacy is as topical as ever — unfortunately also in view of racist and nationalist exclusion,” said Grütters.

Alexander von Humboldt was not self-fixated but sought out the "other" — a mindset, she said, that was especially topical now in current debate as viewpoints or what she termed "worlds" collided. 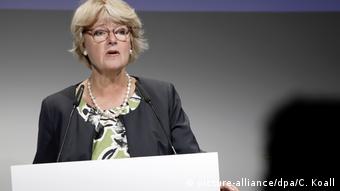 Read more: Humboldt 2.0 — why a scientist born 250 years ago is still highly relevant

Humboldt had communicated his scientific findings by cultivating appreciation for the "other," said Grütters.

Another speaker, the city's Mayor Michael Müller, described Berlin-born Alexander von Humboldt as a visionary on globalization, with a "wide-awake view for the overall context."

"His knowledge of global interactions and connections was as familiar to him as interdisciplinary approaches in research and science and international networking with experts from other nations," added Müller.

Stressing accumulated indigenous knowledge during Saturday's festivities, artist Diana Rico asked: "Why don't we go to the old people from the Amazonia and ask them how things should be done?"

"We still think that we have to look things up in books, but in reality, indigenous people have such a big knowledge. What we can learn from them is: Pay attention to the natural cycles, don't eat even more meat, eat insects and so on," she said. 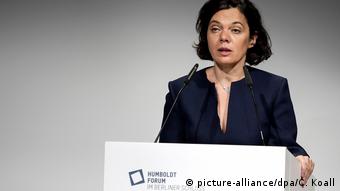 "We look forward full of curiosity toward the Humboldt Forum as a space where topics can be made public and where various points of view can be brought together,” said Achim.

Public invited inside for peek

Forum staff on Saturday also opened construction site doors so the public could take a look at interior exhibition spaces at the Forum's western end.

The complex's general director, Hartmut Dorgerloh, said the Forum — due to open in September 2020 — was embarking on an "expedition into the unknown" with its future mix of education, scientific mediation and art.

On Friday, the Forum, hosting 60 international artists and exhibition experts, gave ticket-paying members of the public a glimpse of its future program.