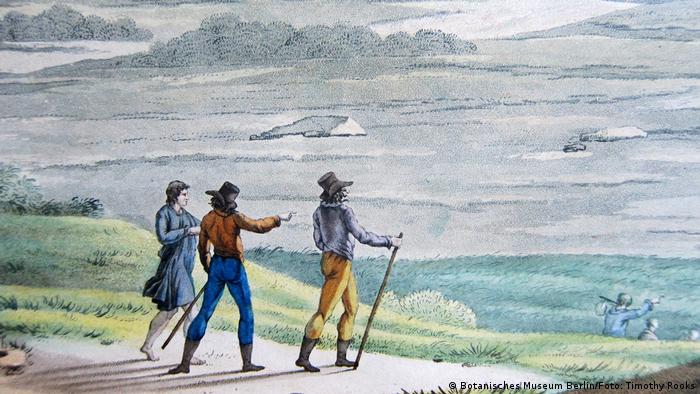 When Alexander von Humboldt started out on June 23, 1802, to climb Chimborazo, it was bound to be an expedition for the history books. It was the world's highest mountain, and no one had ever made it to the top. Yet, with three indigenous guides loaded down with instruments, Humboldt and his two traveling companions were determined to scale the 6,310-meter (20,700-feet) Ecuadorian volcano in the bitter cold.

The ascent was so difficult that he wrote to his brother: "The Indians who were accompanying us had left, saying that we were trying to kill them. So we were alone, Bonpland, Karl Montufar, myself, and one of my servants, who carried some of my instruments."

It wasn't exhaustion, heavy snow, or the lack of proper clothing or climbing gear that stopped them from reaching the peak: It was a huge ravine. Despite the thin air and numb hands, they made it to 5,900 meters, according to Humboldt's own calculations. It didn't matter that measurement of the Himalayas would later downgrade Chimborazo's status; he and his crew had climbed higher than any humans in recorded history. It was a record not beaten for 30 years. 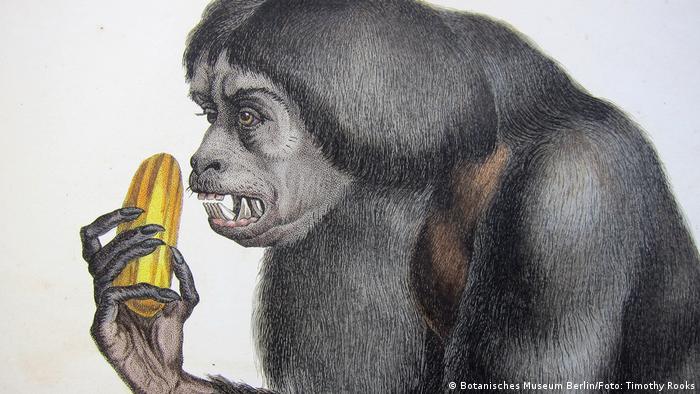 Humboldt could not have dreamed of this, when he and his French traveling companion Aime Bonpland first set sail from La Coruna, Spain on June 5, 1799. Besides clothing and bedding, they were traveling with dozens of boxes full of instruments, among them various telescopes, a sextant, a quadrant, a dipping needle, compasses, a pendulum, barometers, several thermometers, two electrometers, a microscope, a rain gauge and a cyanometer — to measure the blueness of the sky.

After a stop on Canary Island of Tenerife, their ship laid anchor at Cumana, Venezuela, 41 days after leaving Spain. Seeing land must have been a relief. They had survived the Atlantic journey, but even then immigration was an issue and they would have to wait a few more hours for port officers to clear them. The adventurers must have been itching to touch the South American soil so close at hand.

Indeed Humboldt could not hold back his astonishment and wrote to his brother Wilhelm: "What color of birds, fish, even crabs (sky blue and yellow)! So far we have wandered like fools; in the first three days we couldn't identify anything, because one object is tossed aside to pursue another. Bonpland assures me he will go mad if the marvels do not stop. Still, more beautiful even than these individual miracles is the overall impression made by this powerful, lush and yet so gentle, exhilarating, mild vegetation."

In Venezuela, they also encountered the savages of slavery. Seeing it firsthand affected Humboldt greatly and he later denounced it as without doubt the "greatest of all the evils which have afflicted mankind."

After spending some months in and around Cumana and Caracas, Humboldt now 30 started out on his first big expedition — the exploration of the upper Orinoco River in a large canoe accompanied by his instruments, Bonpland, a dog and Indian rowers.

It would be a 75-day 2,250 kilometer (1,400 mile) journey through wild and mostly uninhabited territory full of crocodiles, powerful electric eels, boas, jaguars, rapids, humidity and hunger. The travelers lived off of rice, ants, manioc, river water and the occasional monkey. Day and night the forest growled, buzzed and hummed with animals. 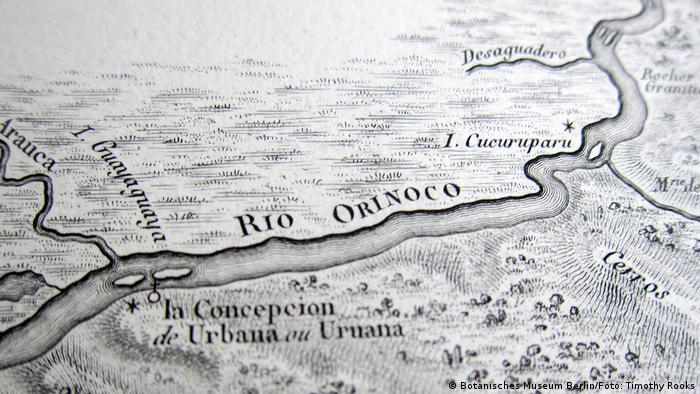 Along the way they encountered Spanish missions and native tribes, collected thousands of plants and made notes and drawings of animals despite their hands and faces being swollen from mosquito bites.

Describing a short stopover, Humboldt wrote to a friend: "It is nearly impossible to write during daylight. One cannot hold the quill still because the poison in these insects is so painful. All of our work happened by the fire in part of an Indian hut where no sunlight came in and you had to crawl in on your stomach. There one almost suffocates from the smoke, but suffers less from the mosquitoes."

It was a miserable and exhausting journey, but Humboldt was able to confirm the existence of the Casiquiare canal, which connected the Orinoco and Amazon water systems. Though not the discoverer of this waterway his letters and maps brought it to a wider audience and pinpointed its exact location. It would become one of his earliest claims to fame.

After a stop in Cuba, the travelers went back to the South American mainland. Arriving in Bogota on July 6, 1801, they met Jose Mutis, the most famous naturalist in the Spanish colonies. Mutis had a huge botany collection and Humboldt was impressed by his knowledge, library and team of artists. Mutis' masterful work would later inspireHumboldt's legendary herbarium and botanical books. 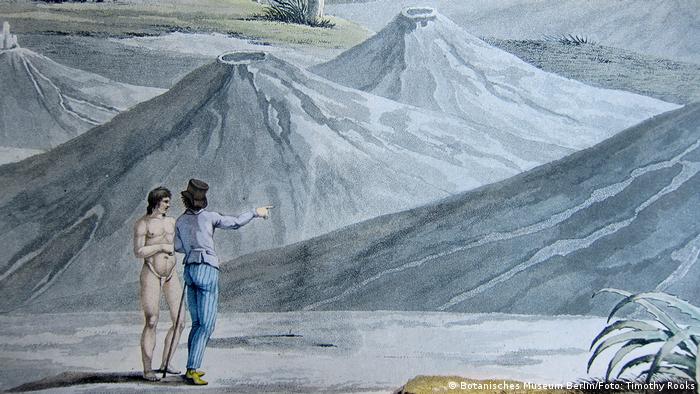 Alexander von Humboldt exploring the air volcanoes of Turbaco, in Colombia in 1801

After two months in the city, Humboldt made his way deeper into the Andes, the then little explored mountain range that spans several countries along the South American continent.

When he arrived in Quito in January 1802 much of the town was in a sad state — the product of a massive earthquake. Yet it had a thriving society, which drew in travelers. They spent about eight months in the province and made expeditions from the city to climb, sketch and measure volcanoes like Pichincha and Cotopaxi before venturing to climb the biggest of them all, Chimborazo.

The travelers continued south into Peru and encountered Inca ruins, found the remains of a mammoth and got the first samples of guano, a nitrogen-rich fertilizer made from bird or bat excrement. 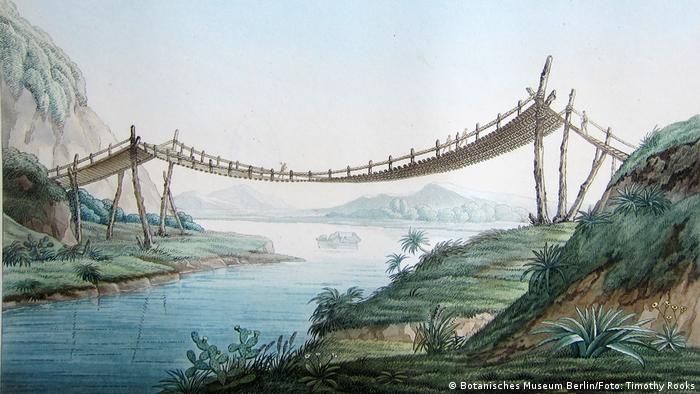 The rope bridge near Penipe, Ecuador in 1802

And in September Humboldt realized a dream when he saw the Pacific Ocean for the first time. From Lima they headed back up the coast by ship to Mexico. While on board, Humboldt made detailed notes on the cold current moving up the Peruvian coast. Today, it not only still impacts global climate by carrying cool water, it carries Humboldt's name too — the Humboldt Current.

The group landed at Acapulco on March 22, 1803, and made their way to Mexico City, by far the largest city in Latin America at the time. In Mexico, Humboldt was less interested in plants and currents and spent his time looking into ancient ruins; indigenous people; and official records on population, agricultural production, mining and history.

Throughout his journey he had studied various languages and found that they were complex and rich in possibilities. In Mexico he counted 35 different tongues. While he was on the Orinoco River, he heard that there were some 200 languages spoken in the area. Though he himself spoke at least four languages fluently, he wrote: "How many times have I admired the talent of the Indians, who spoke 3-4 of these very different languages with familiarity." 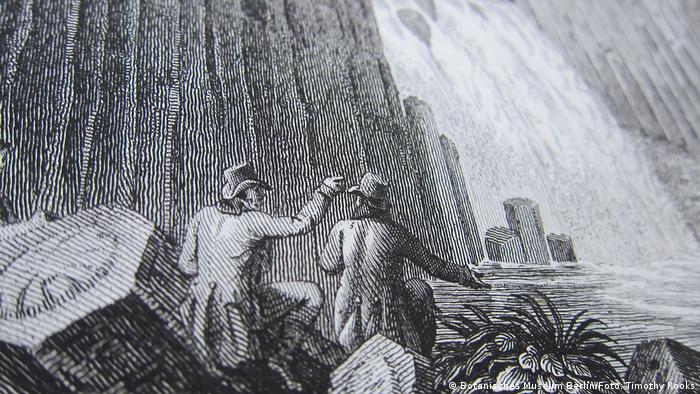 After crisscrossing Mexico, the group headed back to Cuba to sort their collections and prepare for the return journey. But instead of heading back to Spain, Humboldt decided to make one last stop — the United States. Most likely he wanted to avoid taking a Spanish ship, since the country was again at war with Britain. Warships and pirates were on the prowl and Humboldt probably feared for his precious cargo. Whatever his reason, he sailed to Philadelphia.

In America, President Thomas Jefferson had just concluded the Louisiana Purchase, which nearly doubled the size of the country. He was looking for facts and figures about what he had just bought. Humboldt supported by letters of introduction and an invitation to Washington was a perfect source with his detailed maps and fresh data. The two hit it off and became lifelong friends. Humboldt had experienced a country that had thrown away its king, a country of true democracy. It was a quick love affair, but he was hooked and would later call himself "half-American."

But it was time to go home and after six weeks Humboldt finally departed for Europe.

Humboldt had been gone for nearly five years and two months. Before the trip began, he sent a letter to his Berlin bankers outlining what he wanted to accomplish: "I will collect plants and animals, measure temperature, the elasticity, the magnetic and electrical content of the atmosphere, dissect them, determine geographical longitudes and latitudes, measure mountains. But this is not the main purpose of my journey. My real and sole purpose will be to investigate the interconnected and interweaving natural forces and see how the inanimate natural world exerts its influence on animals and plants."

He achieved all this and much more. Though at the outset he had no concrete plans, fate guided him from the sweltering heat of the jungle to snow-capped mountains. He crossed the equator twice, spent about 16 months in today's Venezuela and explored the Orinoco River basin, another 22 months in Colombia and the Andes, and nearly a year in Mexico. 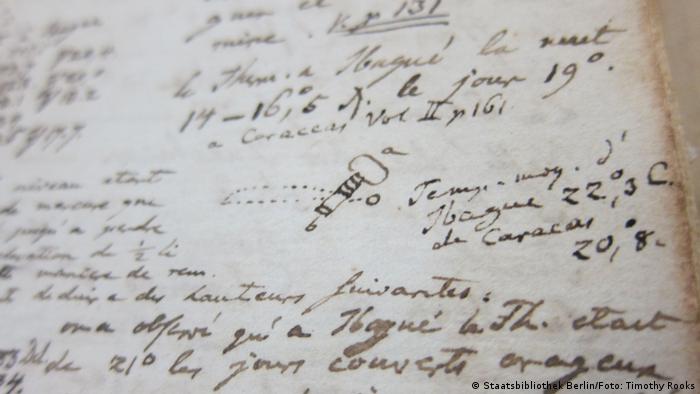 A detail out of Humboldt's South American travel journal from 1801 with a drawing of a mercury barometer he carried with him. Specific instructions on its use are in the accompanying text

Humboldt was not the first scientist to travel through Spanish America. But he was the only one to pay all of his own expenses. And his detailed measurements and universal interests converged to make his trip the greatest.

Using his copious notes and journals, it would take years for him to digest, arrange and publish the results of his time in Spanish America, but these books were so full of facts, figures, illustrations and maps they would change how Europeans thought about the colonies.

After his work was published no one could say that the continent was inferior to Europe. Its nature was mighty and full of ancient artifacts which pointed to great civilizations. Its future also looked bright and Humboldt's writings contributed to a new self-confidence in Latin America, which is why South America's famous liberator Simon Bolivar proclaimed him the "discoverer of the New World."

Roughly 300 plants are named after him, as well as numerous animals and even an area on the moon. Alexander von Humboldt breaks all records. Let's celebrate his 250th birthday! (05.06.2019)