The Mediterranean route remains one of the deadliest migration routes in the world. German NGO Sea-Watch has operated reconnaissance flights as part of its mission to prevent deaths on the high seas.

The headphones crackle as Maria's voice cuts through the monotone hum of the cockpit. She is peering through a pair of binoculars at a cluster of oil platforms rising out of the sea — flames several meters high flicker on top of the oil rigs.

"It's quite common to see boats in the oil fields. When they set off from the beach, sometimes the only thing they can see is the flames from the oil platforms. Often, they are told, 'That is Europe, that is where you need to go.'"

Maria is on the lookout for boats in distress — more specifically, boats filled with people leaving northern Africa in an attempt to reach Europe.

The 25-year-old medical student works for Sea-Watch, a private sea rescue operation based in Germany. Maria, pilot Jan, and photographer Kai form the crew of the "Moonbird" — the organization's reconnaissance aircraft.

One early afternoon, the crew has already been in the air for some time; they scan the sea from about 450 meters (492 yards), 70 miles from the Libyan coast.

Until a few years ago, the central Mediterranean was one of the most popular routes from Africa to Europe. At the peak of the migration crisis in 2015, more than 20,000 people arrived in Italy and Malta in the space of just a few months. Hundreds did not survive the journey, and more and more bodies washed up on Europe's shores. 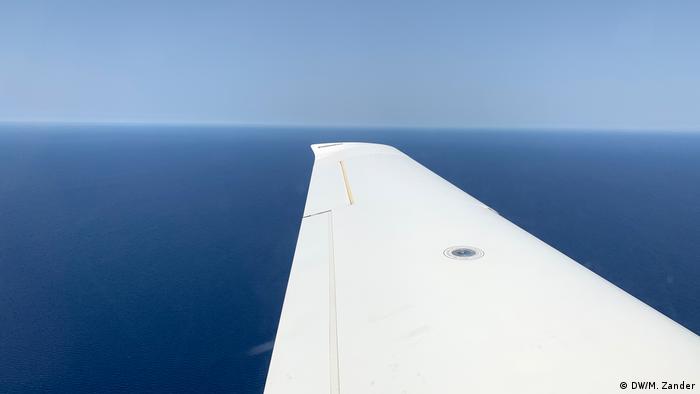 The stretch of ocean between Libya and Italy is one of the deadliest in the world for refugees and migrants.

In an attempt to stem the flow of migration, the European Union enlisted the help of the Libyan coast guard. Aided by funds from the EU, Libya's coast guard began intercepting boats on their way to Europe and bringing them back to Libya.

Many in the EU were upset at the decision to send migrants back to Libya — a country in the grip of a civil war, where rights groups said migrants were being held in inhumane camps and faced abuse and exploitation — rather than to provide them with refuge in Europe.

However, if not for the Libyan coast guard, the migrants close to the country's shore would likely have drowned.

Sea-Watch's Moonbird observes and reports back what it sees, but there are fewer ships in the area able to conduct rescue operations as Italy and other EU members try to close off their ports to private rescue operations. Civilian merchant ships steer clear of the area to avoid the obligation of aiding the migrants.

According to Kai, the Moonbird's crew increasingly has to report boats in distress to the Libyan authorities because there is no one to rescue the migrants.

"For me, it is a moral problem. I do not want to be doing the job of Frontex [the EU border protection agency]. I want these people to be brought to a safe port," he said. 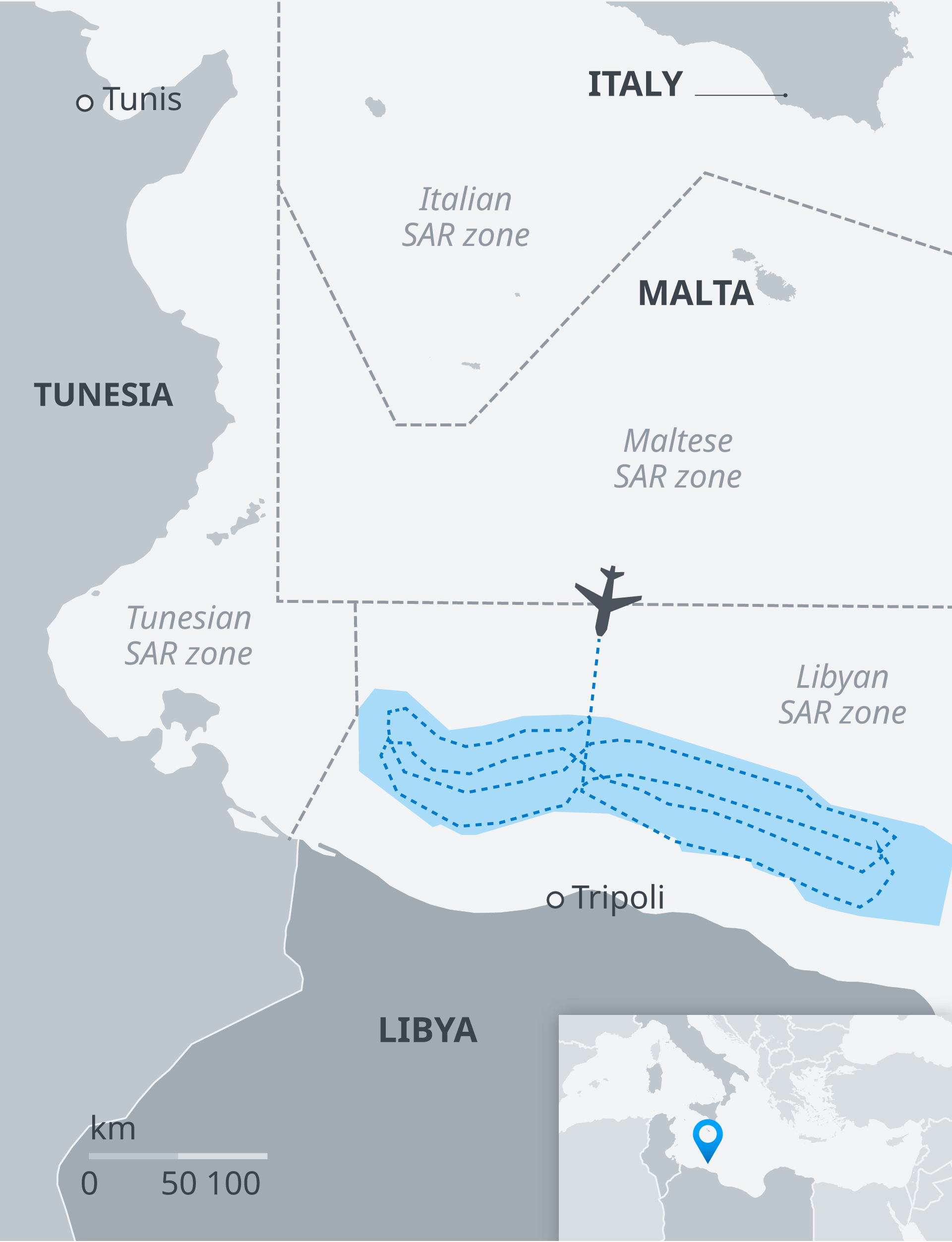 Even with good visibility, there is not much to see on this afternoon above the Mediterranean. Radio transmissions are few and far between. The cockpit is cramped and hot. Outside, it is 30 degrees Celsius (86 degrees Fahrenheit), and the crew's orange flight suits stick to their skin. Working in this heat, and having to be constantly on alert, takes its toll.

The silence is broken when a suspicious object is seen floating in the water. Jan tilts the Moonbird to the side and begins to circle.

"It's a capsized dinghy," Kai says with eyes pressed to the binoculars. Maria agrees: The boat is only being held together by a piece of wood at the stern; the rest of its body hangs vertically in the water. There is no clue about what could have happened to the passengers.

When rescue teams evacuate a boat like this, they will cut the chambers open and leave a mark on the vessel. Had an NGO rescue ship brought the people on board, rescuers would have left a mark on the dingy's remains in case they are found by other groups.

Too much focus on the rescuers

After their flight for the day, Kai and Maria sit on a couch in the apartment where Moonbird crew members stay. The door to the balcony is open, and the sun is shining. A shelf in one corner is piled high with equipment, including radios, cameras, and binoculars. Orange overalls hang on the wall. 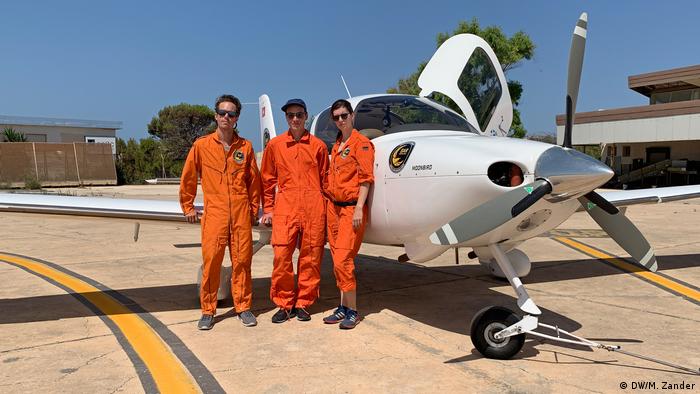 Sea-Watch has requested the apartment's exact location remain undisclosed to keep European authorities' attention from their operation. Pressure on the organization has been growing since European countries began introducing harsh measures against sea rescue operations.

Maria and Kai said they feel there is too much focus on the rescuers and not enough on the people actually affected. Kai said dealing with the public's attention has been difficult, whether it's negative or positive.

Doctors Without Borders and SOS Mediterranee, which operate the new migrant rescue ship, say the mainly Sudanese men and adolescents were picked up off the coast of Libya during three rescue missions. (11.08.2019)

Carola Rackete has been lauded as a heroine and decried as a criminal for helping asylum-seekers stranded in the Mediterranean Sea. What drives the 31-year-old German captain of the Sea-Watch rescue boat? (29.06.2019)

The German-flagged ship had rescued 40 refugees from a sinking vessel off the coast of Libya. Italy's Interior Minister Matteo Salvini has accused Germany of "blackmail" in the refugee resettlement issue. (01.08.2019)