The German-flagged ship had rescued 40 refugees from a sinking vessel off the coast of Libya. Italy's Interior Minister Matteo Salvini has accused Germany of "blackmail" in the refugee resettlement issue. 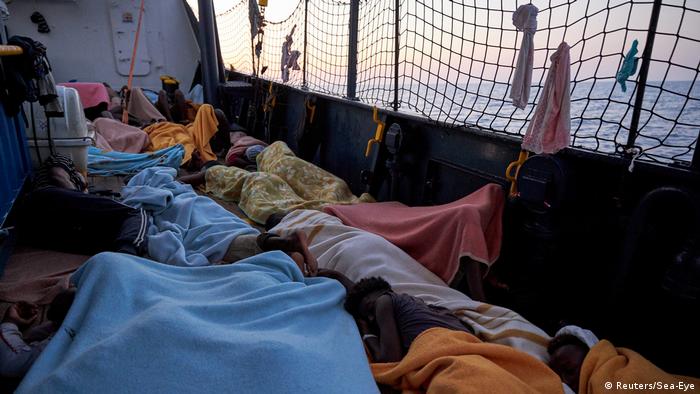 The migrants said they had set off from the Libyan city of Tadschura, east of the capital, Tripoli.

Sea-Eye spokesperson Carlotta Weibl said migrant rescue boats had to "respond immediately to situations, as soon as there is an emergency at sea."

"Political calculations should not play any role whatsoever," she said. The closest port is at the Italian island of Lampedusa, and Weibl said it was critical that migrants be allowed to disembark there in accordance with international law so that they could receive future treatment.

Weibl said the ship had tried to make contact with the Italian coast guard, but has yet to receive a response. 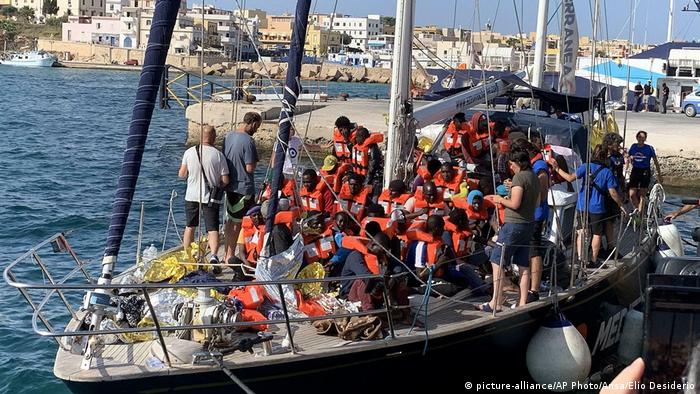 Hundreds of migrants have docked in Lampedusa since 2015.

Salvini has accused the ship of "continuous provocation."

"Here we go again, the German NGO doesn't care about international authority," Salvini wrote late Wednesday night on Twitter. "I won't give up."

Salvini has taken a hard-line approach to prevent migrant rescue vessels from reaching Italian ports. After days at sea on board the Gregoretti rescue ship, 131 migrants were only allowed to disembark in Lampedusa on Wednesday, following an EU agreement over refugee resettlement.

On Thursday, Salvini accused Germany of telling the European Commission that it would not accept a group of migrants from the Gregoretti unless Italy accepted those rescued on the Alan Kurdi.

"This is real blackmail," said Salvini. "It confirms that other European countries consider Italy as their refugee camp, but things have changed and we no longer accept orders and invasions."

There was no comment from Berlin about the accusation.

The EU's Dublin III Regulation says migrants are to apply for asylum in the first EU country they enter the bloc. Italy, Malta and Greece, as the countries closest to Libya, have received the most migrants, and have argued that they are unable to settle them all.

Italy says there could be criminal consequences if a ship docks in their ports. Authorities arrested migrant rescue ship captain Carola Rackete in July, after she docked in Lampedusa without prior permission. She has since been released following an international outcry.

jns/rt (kna, dpa)
Each evening at 1830 UTC, DW's editors send out a selection of the day's hard news and quality feature journalism. You can sign up to receive it directly here.