Migrants on an Italian coast guard ship will be allowed to disembark after some EU states agreed to accept them. As soon as the breakthrough was reached, Italy blocked another German NGO rescue ship from its waters. 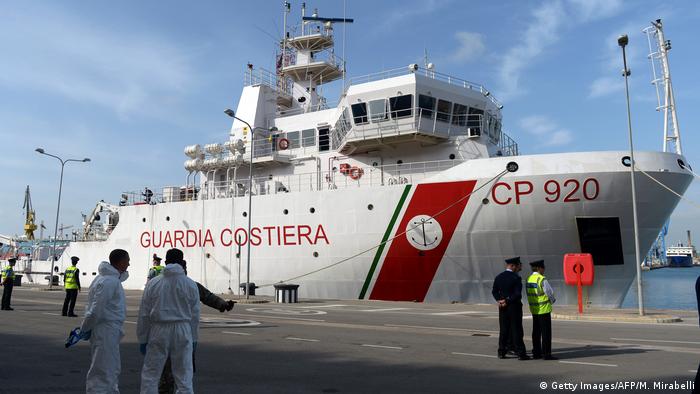 Interior Minister Matteo Salvini announced Wednesday that Italy would allow 131 migrants on board the Italian coast guard vessel Bruno Gregoretti to disembark after reaching a deal with other EU member states.

The far-right Italian lawmaker, who leads the League (Liga) party, had previously refused to allow the rescued people to leave the ship. The Italian coast guard rescued the people from boats in the Mediterranean last week, but they have remained on the boat docked in Sicily for the last five days.

"In the coming hours I will personally authorize the disembarkation," Salvini announced in a Facebook video released on Wednesday.

Former Italian navy chief Giuseppe De Giorgi, who launched the Mare Nostrum maritime rescue plan in 2013, hailed the Gregoretti's crew who "despite all were committed to accomplishing with honor their duty as sailors to protect lives at sea."

Last week, French President Emmanuel Macron said 14 EU members had approved a plan for the redistribution of refugees rescued in the Mediterranean, and eight states said they would actively take part in the process. On Wednesday Macron wrote on Twitter: "A European solution has been found for the women and men stranded on the ship Gregoretti."

"They will disembark in Italy, then be welcomed in six countries, including France. Our country is true to its principles: responsibility, solidarity and European cooperation," the French president wrote.

France, Germany, Ireland, Luxembourg and Portugal have agreed to accept the refugees, according to the European Commission. The Catholic Church in Italy said it would care for the migrants left in Italy.

Some of the rescued people on board the Gregoretti had been allowed to disembark for medical reasons, including a seven-month pregnant woman, her two children, and her partner, as well as 15 minors.

Italian media said prosecutors have opened an investigation into conditions on board the coastguard supply vessel, where the migrants had to share one toilet between them for nearly a week.

Permission for the Italian coastguard ship to disembark the migrants came as another rescue ship operated by the German NGO Sea-Eye picked up 40 migrants off the Libyan coast early Wednesday.

Italian media reported that Salvini has blocked the Sea-Eye's Alan Kurdi vessel from entering Italian waters, setting the stage for another standoff.

Sea-Eye said it was heading towards the Italian island of Lampedusa because it is the nearest port.

On Twitter, Salvini wrote that the Alan Kurdi should disembark in war-torn Libya as ordered by the North African country's coast guard.

In early July, Italian authorities arrested Carola Rackete, the German captain of the Sea Watch 3 migrant rescue ship. She had forced her way into port and disembarked 53 refugees from her vessel without authorization from Italy, and was arrested as a result.

Pressure from other European states led to her release soon after her detention by Italian authorities.

According to the UN refugee agency,  there have been over 3,600 sea arrivals in Italy so far this year, down from tens of thousands of arrivals in previous years.

A refugee NGO in Italy is hoping that the country's new populist government will fail to implement the hardline immigration reforms promised during the election campaign. DW's Bernd Riegert reports from Rome. (22.05.2018)