French President Emmanuel Macron gave a positive spin to the partial approval of a plan to allocate migrants across the EU. Italy did not take part in the meeting held in Paris. 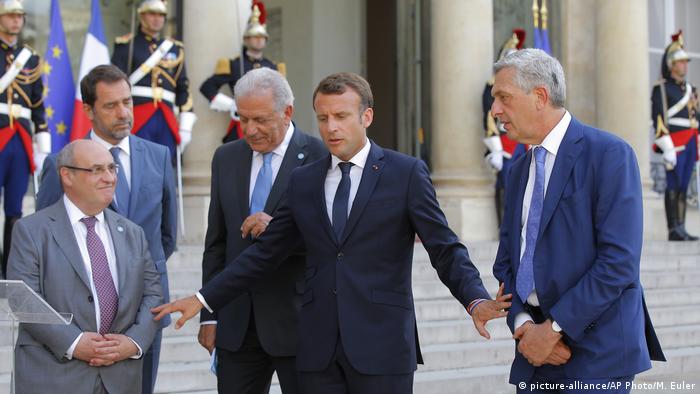 Interior and foreign ministers, as well as officials from the European Commission and the United Nations' refugee agency, met in Paris on Monday in an effort to find a mechanism which would enable refugees to be equally distributed across the continent.

"The conclusion of this morning's meeting is that, in principle, 14 member states, at this stage, have expressed their agreement with the Franco-German document," Macron told journalists. He said the new initiative would be "quick" and "automatic." Eight states had "actively engaged their participation," he added.
Germany's Foreign Minister Heiko Maas confirmed that some progress had been made.

"I think that we have not yet reached our goal, but we have managed to get much further than we have been before," Maas said. "The haggling around rescues in the Mediterranean has to be ended."

Maas added that a "coalition of the willing" was required.

In addition to France and Germany, Finland, Luxemburg, Portugal, Lithuania, Croatia and Ireland had  signalled an intention to move forward with a new system.

At the forefront of migrant arrivals from the Middle East and North Africa, Italy's government has long complained of a lack of support from other EU states in delaying with the people seeking safety or a better life in Europe.

Italian Interior Minister Matteo Salvini did not take part in the meeting on Monday, instead he wrote to his French counterpart Christophe Castaner to warn of the effects of decisions "solely taken in Paris and Berlin."

The French president has also asked the Libyan government to ensure measures are taken to guarantee the safety of migrants.

Charity Doctors without Borders (MSF) said the EU's stance towards people fleeing Libya was resulting in "organized human suffering on an industrial scale."

Humanitarian group SOS Mediterranee said it was doing all it could in the face of intense opposition from some EU countries.

"Every effort is made to scare and to prevent ships from doing their job," Frederic Penard, head of operations at the NGO, told a press conference in Paris.

Attempts by charity ships to rescue migrants from drowning in the Mediterranean have angered Italy, which has taken a hard-line in refusing to allow ships carrying migrants from docking in Italian ports.

Sea-Watch 3 captain Carola Rackete has pleaded with authorities not to be distracted from the humanitarian crisis off the coast of Libya. She said the EU needs to stop cooperating with the Libyan coast guard. (11.07.2019)

Carola Rackete, the 31-year-old German captain of a migrant rescue vessel, was detained in Italy after refusing to stand down in the face of military orders. Italy had banned the Sea-Watch ship from entering its waters. (02.07.2019)

Interior ministers from across the European Union have failed to agree on temporary measures to manage increased migration across the Mediterranean. Officials have told DW that the future of the bloc is at stake. (18.07.2019)