EU, France split on Libya as Khalifa Haftar strikes Tripoli | Europe | News and current affairs from around the continent | DW | 23.04.2019

The European Union has formally recognized the government in Tripoli. However, French officials seem to be playing both sides. Many Libyans want France's government to butt out — and General Haftar continues to advance. 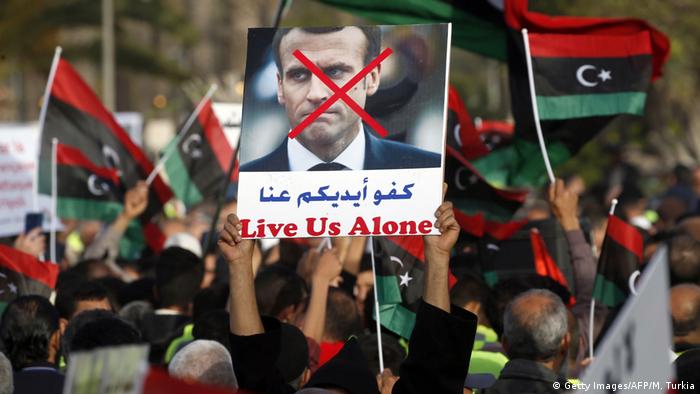 In foreign policy, every word matters. That's why it is sometimes interesting to note the words that are not being said. On April 8 — days after General Khalifa Haftar launched his offensive on Libya's internationally recognized unity government — the EU's high representative for foreign affairs and security policy, Federica Mogherini, published her first statement on the advance. In it, she described the attacks by the general's Libyan National Army as a danger to the people in the country, as well as to the UN-mediated peace process. Mogherini called on the LNA and government forces to agree to a ceasefire. However, she avoided any mention of Haftar by name. (She did mention him a few days later in a speech before the European Parliament.)

It has since been reported that French officials lobbied the European Commission to prevent Mogherini from mentioning Haftar in her statement by name. The general, a former officer in Libya's regular armed forces, has played an active anti-government role since the current civil war began, in 2014: The LNA, which is based in the eastern coastal city Tobruk, does not recognize the unity government in Tripoli, led by Prime Minister Fayez al-Sarraj. Nevertheless, in 2017 the novice French president, Emmanuel Macron, helped raise the warlord's diplomatic status. In an attempt to broker a power-sharing deal for Libya, Macron invited the general and the prime minister to Paris for talks.

Macron gave the meeting a sheen of success, which helped burnish his diplomatic credentials early. Al-Sarraj and Haftar agreed to elections to help resolve the conflict. These have not happened. France, along with the United States and Britain, was a driving force of the international military intervention of 2011. The bombardment by the French-led coalition resulted in the fall of the long-term Libyan dictator Moammar Gadhafi and, ultimately, in the current power vacuum in the North African country. 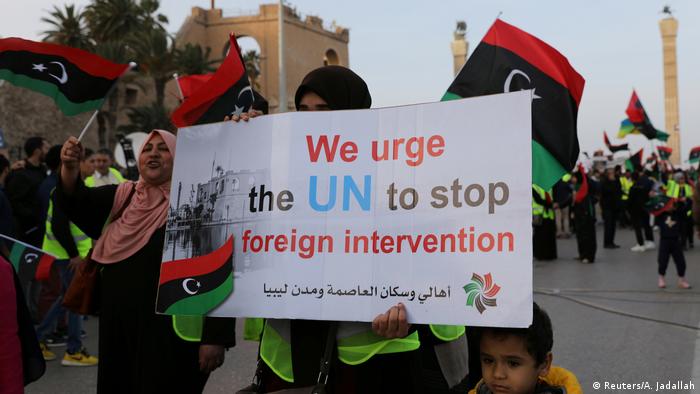 Libyans have called on international actors to stop enabling the belligerents

Haftar also met with other world leaders, as well as with groups within Libya. Over time, the general quietly extended his influence by bringing a number of smaller groups onside. It has been reported that Russia and some of the Gulf states offered financial support for his efforts.

By early April, Haftar controlled important oil fields in southern Libya. Both the petroleum and the southern border itself are of geopolitical importance to France. The former colonies of Chad and Niger are just across. If French officials were to assume that Haftar had a better chance of stabilizing Libya than the internationally recognized government, it would be logical for them to support him.

This, however, is not France's official position. On Friday the Elysee Palace released an unambiguous statement in support of "the legitimate government of Prime Minister Fayez al-Sarraj and the mediation of the UN." Many, however, find this hard to believe — including officials from Libya's internationally recognized government. Right before France's government released the statement, Libyan Interior Minister Fathi Bach Agha said the country was supporting "the criminal Haftar." The international government broke off diplomatic relations with Paris, and hundreds of people demonstrated in Tripoli against both France and the general. Italian Interior Minister Matteo Salvini, of the anti-immigrant League party, accused France of cooperating with Haftar. He described Italy as a northern "neighbor" of Libya's. As many displaced people use the country as a transit zone en route to Europe from elsewhere in Africa, Italian officials have shown a particular interest in Libya's stability — often seemingly at whatever humanitarian cost. 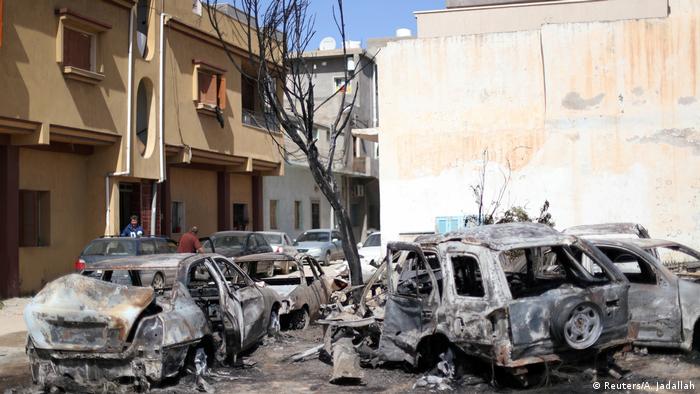 Omid Nouripour, the foreign policy spokesman for the Greens in the Bundestag, said Germany's government must "spare no effort to persuade the Italians and the French to agree on a common line." He added: "The French have to understand that, within the European Union, we have to try to balance various interests. If it's about agreeing a common line with regard to Libya, the French and the Italians have to find a solution that, to a certain extent, makes allowances for the interests of both sides." Nouripour said it was the German government's job to make this clear to its friends in Paris.

Germany currently has a special role in dealing with international conflicts, as it holds the rotating presidency of the UN Security Council this month. France performed the role in March — the two countries are sharing the presidency over the two allocated months as a symbol of their unity. They do not, however, seem unified when it comes to Libya. Chancellor Angela Merkel has spoken to al-Sarraj and condemned Haftar's offensive — but Nouripour said Germany must also urge French officials to exert their influence on the general to prevent him from aggravating the situation. "Our great friendship with France must allow sufficient scope for this," he added.

Germany has tried to get the UN Security Council to address the situation in Libya. An emergency session on Thursday ended without a joint decision — not because of France, but because it was vetoed by Russia and the United States. Diplomats told the Reuters news agency that Russia would not agree to assigning responsibility for the conflict to Haftar. The United States did not give a reason.

The US government did, however, let it be known that President Donald Trump had already spoken to Haftar by phone a few days earlier and had praised the general's "significant role in fighting terrorism and securing Libya's oil resources." According to the White House, Trump and Haftar also discussed a "shared vision for Libya's transition to a stable, democratic political system." Since Trump took office in 2017, the United States has often acted in conflict with the United Nations and EU.

While the international community fails to agree a response to developments in Libya, General Haftar continues to establish military facts on the ground. The World Health Organization has counted 254 deaths since his offensive began in early April — with more than 1,200 people injured. During airstrikes on the capital on Saturday night, residents of Tripoli reported that they heard a humming sound, as if drones were being used. Haftar's militia had been using older jets for its attacks, most of them left over from the Soviet Union. If he is now in possession of drones, this would be a further indication of strong support from abroad.